I Like Judo and the People Who Do It 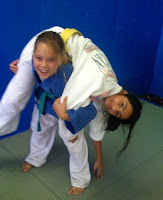 It seems to be fashionable to criticize people in judo. I am not going to bother to repeat some of the negatives I have heard. I am just going to disagree. It is MY blog, after all.

In my experience, judo is full of people who are nice, fun, hard-working and intelligent. Yes, there are some jerks, but they are the minority so it is not too hard to avoid them, most of the time.

Today at the tournament in San Diego I had the opportunity to watch some really good judo players. Some of them won. Even more fought their hearts out. There was a lot of great technique.

I was also able to watch some of the players from the USJA/ USJF West Coast Training Center and get some ideas on what they should work on more. Everything I saw reinforced my belief in the great potential of these young people who come for an EXTRA five to eight hours of practice every weekend.

A few points were hammered home by this tournament. First of all, there is a lot of unwarranted snobbery in judo where it is assumed that people who live outside Los Angeles (or whatever metro area where one lives) really don't know much judo. Actually, in San Diego, there were an impressive number of counters to uchimata, foot sweeps, juji gatame and other sweet techniques. This assumption that everyone but "us" is a bunch of local yokels is fallacious. A lot of good judo players have come from such places as Kalamazoo, Michigan (Olympian Martin Boonzayer, U.S. National Champion Chris Snyder), Fond du Lac, Wisconsin (world and Olympic silver medalist Lynn Roethke) and I could go on and on.

Second, the judo community is full of people like Ernie Smith (who I have known since I competed against his barely teenage daughter, long before he thought about being a grandfather), like Dr. Rob Oishi who seems to be everywhere coaching and helping out, along with the rest of the folks from Gardena Dojo who embody what judo really is about. Gardena Dojo is one of the largest clubs in the country because they realize that most people who ever take judo are doing it to learn to be healthier and more disciplined, to be part of something with a history and philosophy. If you are a national champion you are welcome at Gardena. If you suck at kata (for example, me) you are still welcome. If you want to learn judo but never compete and can just come to practice twice a week, you are welcome then also. Sawtelle Dojo is like that, too, but they did not go to dinner with us nor share in the Chianti at the Italian restaurant we all went to after the tournament so deduct ten brownie points for them!

Third, judo is full of really SMART people. In addition to Dr. Oishi coaching, Dr. Mark Yamanaka refereed at the tournament, Dr. Jake Flores was the medic, Judge Walter Dean was helping run the event, along with Jesse Jones, who is an extremely successful businessman, and others too numerous to mention. It is quite a contrast with some other sporting events I have attended where the majority of participants seem to have the same IQ as your average house pet and all of the spectators seem to think (and I use the term loosely) they are entered into some "Who is the dumbest in the building" contest. Really, by comparison to most sports activities, judo participants are College Bowl finalists.

Speaking of Dr. Jake, because my doctorate is in psychology he always thinks I know the answer to such questions as why people put down the groups with which they are associated. Unfortunately, he is wrong. When they issued crystal balls at graduation, I was in the wrong line. Maybe it is just human nature to believe that the grass is always greener on the other side of the fence and if I was in tae kwon do or football or boxing or wrestling it would be a better deal.

It aint so. Besides, in what other sport can you pick a person up three feet off the ground and slam her down? Wrestling, you say? Yes, but if afterward, you jump on the person and start choking him, in wrestling they consider you a psychotic danger to the sport whereas in a judo tournament they are just as likely to give you the fighting spirit award.

Judo is so cool!

2. Learn the rules. Let's start with this one. An ippon means largely on the back, not the largest part of the back. If I throw you and you land on your shoulder blades with none of the rest of your body touching then 100% of where you landed was on your back. It was not on 100% of your back, but the rules don't say that.

There are a lot more rules than that, by the way. I mentioned that because that is the most often cause of disputes where the disputing player or coach is in the wrong. Next time I will try to remember mention the second most disputed rule.
Posted by Dr. AnnMaria at 9:46 PM

no here's what you do, you bring to the tournament one gi that's 7cm from the wrist, and another one thats around 9cm, each color. Yeah that's 4 gis, but just bring a bag with wheels on it if you feel that lazy (I sure do!)
If they make you change it go and put the other one on, but most times they don't check
At the worlds they made me change my gi and i went and put a smaller one on...they let me fight in it.
For some reason i think referees like to tell you to do stuff to see if you listen to them.
Kinda like the boss at your job making you redo the same task 10 times just so he can get the satifaction of making you do something.

btw mom i get your point, i'm trying to not end up with the iq of a house pet

Oh, and Glenn Koyama said at the tournament today that it is 5 cm from your wrist and 10 cm on the sleeve. Okay, yeah, I understood what I meant anyway.

I made fun of Destinee and Kala for bringing four gis to the All-Women's Tournament. Now I know they got it from YOU!!!

Kind of twisted to see a person talk so much about the joys of choking another person out. And not in a funny/ha ha kind of way either.

I agreed and initially met with her at her home to help organize the project. A sept ans, le petit prodige pouvait remplacer son matre l'orgue pour la messe. Clefs: Clef is a symbol that signifies the octaves in which the musical notation is played.