How to get better at judo: Step One 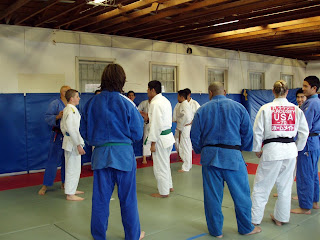 in no particular order and out of about a million

Read books. Watch videos. Watch your competitors, watch your teammates and watch your players work out. Does that sound like a stupid-a@@ way to get better at a combat sport? I didn't say do those things INSTEAD of practice.
This is one of those things I should have done more of in my competitive days.

What I did do right was to watch every match I possibly could of my competitors. On tape, not everything gets captured. You don't see that the person was behind by a yuko when she rushed the other competitor, or that look she had on her face after getting roughed up by her opponent on the mat. Any chance I had the opportunity to see my competition on tape, I watched it over and over. I was looking for weaknesses, any time I saw one of my competitors get scored on, I would stop the tape, back up and see what happened right before that and take a note if the person was right or left-handed, attacked right off the grip, and so on. I really studied my competition and was very prepared when I went out to fight. At practice, I would tell my teammates,

"Okay, this person I'll probably fight in the finals does left tai otoshi all of the time with a high grip. Grip me like this and try left tai o when we are doing randori."

What I did wrong was not study other people very much - I was smart enough to study my teammate, Miguel Tudela and learned a lot from watching him. I should have done more of this. It was our strength coach, who knew nothing about judo, who pointed it out after watching judo practice for one of the first times. Miguel fought in the men's open weight category. I fought in women's 56 kg. Both of us were physically stronger than almost anyone we would ever fight and short for our divisions, which meant people often took a high grip. We had similar fighting styles. I don't think either of us ever got a stalling penalty in our lives, and you could have hit us with a brick in the match and we would not have stopped coming. Miguel used that strength to his advantage. He did a lot of morote gari (double leg take downs) and leg picks. He also used his head a lot, literally. Miguel would block a throw with his face. He would hit someone with a pick-up literally head-on, slamming his face and chest into the person as he pulled their leg up. The way I do tani otoshi to this day was copied off Miguel twenty years ago back at Tenri Dojo. I should have studied other people fighting much more than I did and I am sure I would have learned a lot more.

Another mistake I made was not to watch more tapes of international competition, not just my competitors. Now I see a lot more set-ups because I watch matches of people doing drop seoi nage or ko soto gari and see how they got into it. I watch tapes more analytically now, not just cheering and saying what a great throw, but looking at how the person grips, how he got that grip and what happened before the throw. Did the opponent try a throw that didn't work and come out? For example, lately I have been having a harder time getting my right hand on the lapel. This is good because we have been working on grips a lot, and teaching one of the same techniques I always use of having my right foot back and punching in with my right hand. When everyone caught on to that, I would put my left foot back, cross grip my left hand to the lapel and then feed it to my right. That was the second technique we taught and now even our juniors block that. I was watching a video the other day from Fighting Films that had a lot of ippons from shoulder throws. What I noticed many of the players were doing was gripping the right lapel with their left hand, as if they were going to get a left grip. They then pulled the person toward them and got their right hand on the right lapel and switched their left hand down to the sleeve. Then they were able to pull the person closer yet and get the left lapel grip they wanted. For someone who hadn't seen this before, this would have been very helpful. I had seen it tons of times before and it was still helpful. I realized that I had gotten into a bad habit of doing the same gripping sequences over and over. Here was another I knew and had not used lately just because I had become lazy, doing whatever was working until it quit working. I'm not competing any more, so I am not as focused on staying at my peak as I was 20 years ago. As a coach, though, I cannot afford to get lazy, and neither can you as a player. If you are winning, it is easy to become lazy - until you lose! Try to see any time in practice someone is defeating anything you want, a grip, a turnover, and work on improving that.

My favorite DVDs and videos - for learning to gripfight - Get a Grip, by Hayward Nishioka. It has the basics and is a great start and a great reminder for coaches of what we should be teaching.

For teaching beginners, Mike Swain's Basic Judo. It IS basic, but most of us teach basic judo most of the time. If I have a little kid having trouble with tai otoshi, I might watch this and see if Mike teaches it a little differently or what he emphasized.

Steve Scott's Coaching on the Mat is a book I highly recommend.

I feel guilty to admit the number of books I have not read yet and DVDs I haven't watched. I have yet to see Jimmy Pedro's Grip Like a World Champion, nor have I read Neil Ohlenkamp's Judo Unleashed nor Gene Lebelle's books. All are on my to-do list. Maybe that will be the NEXT rainy weekend.
Posted by Dr. AnnMaria at 11:33 PM

Ciao AnnMaria,I just wondering if olympic Judo athlets have government
support(money,facilities,medical care,insurance etc etc) in USA.
In Italy they are mostly part of the army corps,so they get salary from that and same from C.O.N.I(committee
olympic national Italy).Must they do trials to gain the partecipation?Do you think you are going to see Ronda at Beijing?A big thank for your nice blog,I hope to meet you in person on a tatami one day.Grazie un saluto Ric

Do you think that olympic level judokas can throw always an olympic level wrestler? Can then easy submit wrestlers with chokes and armbars?

Olympic judo athletes sometimes get government money in the U.S. but more often they don't. First, they have to have a certain number of points from winning international tournaments.

Even the ones who have enough points that they are supposed to get money, like Ronda, often don't get it at all or get it many months after it has been promised.

Ronda has been very lucky to have some wonderful sponsors like Lia Hatashita with Mizuno and Hatashita International, Dr. Jim Lally and the New York Athletic Club people helping her out with expenses.

Yes, I am planning on flying to Beijing to watch Ronda. Will you be there?

Whether a judo player can beat an Olympic wrestler or not really depends on who the two are and if either knows anything about the other sport.

Wrestlers who have never played judo are usually easy to catch with chokes or armbars - the first time. If they are a really good athlete, you probably will have a much harder time after that.

But in general, have you seen in olympic preparation judokas and wrestlers togheter. Who won most sparring matches? Could judokasthrow easily wrestlers? Coud they choke and armbar them?