Observations on China: The same, the good, the bad and the simply different 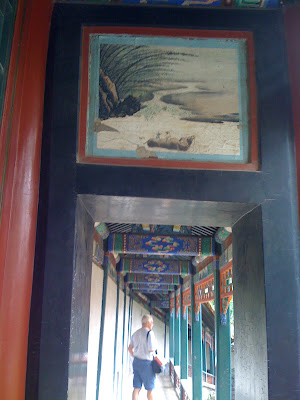 China was different than I had expected, a paradoxical statement since I really was not sure what to expect. From some accounts, I had expected to see depressed, oppressed people living in squalor. I saw some of what appeared to be that, but no more than in Los Angeles. We have skid row, crack addicts and gangbangers, so although it is always a beautiful sunny day in paradise, it isn't heaven in the City of Angels, either.

Of course, there have been lots of reports in the press about how the city was "cleaned up" for the Olympics. If that meant new parks, new construction, new gardens, then that is not a bad thing. There were certainly signs that all is not as shiny and nice as portrayed. I am a nosy person, as anyone can tell you, and although I don't speak a word of Chinese, I have visited a lot of countries and I always make it a habit to walk around the neighborhoods and off the beaten path. When I looked behind the huge canvas BEIJING 2008 banners stretched everywhere, I invariably saw vacant lots that we would call eyesores back home. So, yeah, Beijing was a lot like L.A. or any other city with millions of people.

The traffic was about as bad as Los Angeles on an average day, that is to say, better than Tokyo, New York City or San Francisco and worse than just about every other place on earth. Several people told me that cars were only allowed on the road on certain days. If this was half the cars, I can't imagine what traffic is like under "normal" circumstances.

Some reports said the Chinese were the friendliest people they had ever met. Others said it was mostly phony and the government had instructed them in everything from hygiene to proper smiling. To me, they seemed like people everywhere, if you were nice to them, they were nice to you. I didn't try being a jerk to people as an experiment to see what would happen.

Everything in China is a lot more labor intensive. For example, every morning there would be hordes of people out sweeping the streets with long brooms. In Santa Monica, all of those folks would be replaced with one guy in a big machine. I wonder what would happen if we quit giving people welfare and paid them the same amount to clean the streets. Santa Monica Beach could sure use some cleaning.

There sure are a lot of people in China, which explains the labor intensiveness. For example, if you needed someone to drive a visitor around and the visitor only spoke English, you would look for an English-speaking driver, right? In China, you are just as likely (maybe more so), to hire two people, one a driver and one who speaks English. Everything in China seemed to be like that. There were exceptions, of course. We met one very fascinating gentleman who owned a hotel, a restaurant and was a judo coach. In most cases, though, a job one person would do in the U.S would have five or seven people doing it in China. 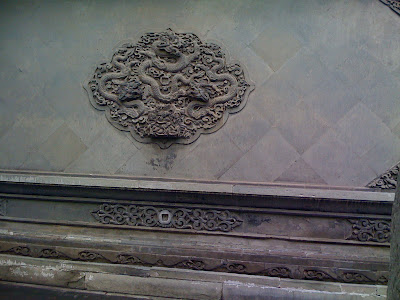 The good
Lines were much shorter than I expected, particularly given that the Olympics were going on. When I was ready to go to the airport at 4:30 for my 8:00 a.m. flight, our Chinese hosts thought I was crazy. This is another thing I like about the people in Beijing - they don't get up early. When I came down to the lobby, the only person awake was Jim Pedro, who had just come back from jogging, and he IS crazy.

It was about an hour drive to the airport from the hotel, and I figured if it was two hours to get on an international flight in L.A., I should be there three hours early in Beijing, since it is a bigger city, during the Olympics, etc. The very polite driver and equally polite interpreter came downstairs an hour after me, shaking their heads. When the interpreter told me leaving at 6 a.m. would be plenty of time to get to the airport, I thought she misunderstood when my flight left. Even leaving an hour later than I wanted, I was through security and waiting at the gate an hour and a half before my flight took off. With two or three times as many people doing screening, baggage handling, checking passports and taking tickets. Again, I wondered what would happen at home if the people receiving disability payments were instead given some training and a job checking passports or directing people to the correct line. 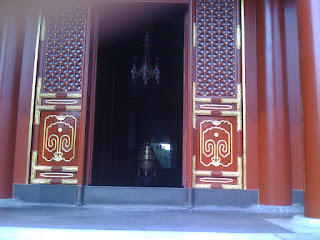 The bad
None of this is to suggest that I intend to move to China any time soon. There are about a hundred ways in which the U.S. is more comfortable, beginning with the plumbing. I feel no urge to be politically correct here. Let me be frank. Those squat toilets are NASTY. They smell and there was urine on the floor everywhere that I went. (And it was there when I went in so don't go blaming me.) And who came up with having the toilet paper OUTSIDE the toilet? Is this supposed to teach you some life lesson about advance planning?

Chinese dudes, some advice - if you are so convinced that you must squat down to pee, however unfriendly it might be to people with bad knees, go to Japan and study what they do. They have those squat toilets, too, but theirs aren't gross.

Food - I already talked about the food. My niece said that Americans will deep-fry anything. Maybe she is right but I would have taken a deep-fried twinkie over that stuff any day. After a week, I was home sick for Dunkin' Doughnuts and french fries. It beats raw flatworms all to hell.

The different
I think coaching must be very different in China because I got a lot of questions about Ronda's coach, Jim Pedro, Sr., who came to Beijing. I got the impression that even when I answered their questions people were still confused.

There were about 100 other questions like this. I'd be very interested to find out what coaches are like in China. From the puzzled looks I got from people, I think it must be a very different system.

If the senior nationals happens to be in your hometown and you are a green belt, or you are 13 years old, going to the Ladder Tournament and the Fall Classic is the day before, by all means, give it a shot. The absolute worst that will happen is you'll get an extra match or two.

There are two possibilities:
1. People are stupid.
2. Some people are not that interested in winning. They want the experience of being in Paris.

Recognize these are two different things. If you really want to win, all I can say is that I followed the plan above and so did Ronda. We both won a lot. That doesn't mean you can't go to Paris, but I suggest you separate your competition from other motives. I wanted to go to the Bahamas, Hawaii. the Costa Rican rainforest, and on a couple of cruises. So, I did. It was all way cool. It didn't have anything to do with judo and I didn't pretend otherwise.

If you are not winning, don't spend a lot of money going to tournaments. Spend it going to camps where you can train several hours each day and get better. Unless you are already beating almost everyone in the U.S. (as in, you have medals from the senior national championships) don't spend your money going to Japan or Europe for camp (unless you just happen to want to go those places and have the money). Win here. Then, go there and win there.
Posted by Dr. AnnMaria at 12:01 AM

It is hard for them to understand this kind of deep commitment Mr. Pedro Sr. has had with Ronda.

You are lucky they didn't ask you if Ronda sleept with him. Remember Kill Bill.

If you are not winning, don't spend a lot of money going to tournaments. Spend it going to camps

That is great advice. All of it.

No one who had ever met either Ronda or Jim would think that.

Do you think you could make the SZJ videos downloadable? They are great practice tools(and often hilarious as well)and it's nice knowing I can trust the technique. FYI: Last night on the way home from a particularly great practice, an unusually confident young BJJ student asked if he'd get a chance to go with a certain instructor/pokemon fan should we attend the Clinics in December. (I must say, I am liking the confidence since our heart-to-heart, but I am questioning the opponent choices!) You may want to warn the aforementioned instructor....9 year old pokemon fans can be vicious....

On the Judo Tip/ the plan:

Totally agree with you, beat everyone at home before you travel, then travel a small distance and beat everyone there, then go further!

I am from NZ and of the opinion that our players although getting "experience" going to Japan and elsewhere, they often miss beating ALL the Australians from the list.

That said, I think perhaps people here in the UK do the same thing. Start fighting overseas before being able to beat all comers inside the UK first.

For black-belt level competitors who are relatively new to the scene, I think there is a point of going to tournaments that are above your level, at least few times, at different levels of tournament. For people without much experience, it is an eye opener of how much difference in skill among the competition. For example, local tournament, E-level, D-level, B-level and A-level tournament all have different competitor pool and it is a great experience to feel that difference for yourself. So that you know what to aim for - you have experienced high level competitive judo for yourself and you want to be like those who beat you or better.

Also, tough training camps in Europe and Japan are not waste of time. It helps to train among those who are much better than you. Training with high caliber players can help to raise your level.

Other than that, I agree with what you said about win small first before winning big.

I agree that training camps are not a waste of time. However, what I see very often is people who go for one day for the tournament and skip the camp, paying about $300 per second for the time they actually spent on the mat. They would be a lot wiser to skip the tournament and go to the camp.

I disagree with going to things FAR above your level, e.g., an E-level player going to an A-level tournament. It is just discouraging.