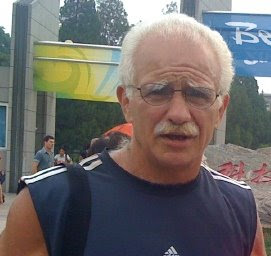 Julia stayed home from school sick today. I wasn't feeling so hot myself, so I stayed home with her. After so many hours laying in bed, I got bored, so I called up Jimmy Pedro, Sr. and bothered him.

When someone whose competence I respect makes a different choice than I would have made, I wonder about it. One possibility is that they are just dumber than me, but the more interesting alternative is maybe they have an idea I haven't thought of. Jimmy had mentioned taking his team on a trip overseas and I was curious. It seemed to me like a repetition of the same failed strategy I have seen over and over, which is:

I asked Jimmy why he was doing this and what would be different. He said a couple of reasons, some made absolute sense. Some, I am skeptical. The first difference is that he said he would go with them to analyze what they did right and what they did wrong so they did not come back and make the same mistakes over and over. That's an excellent point. There are words for people who think they can coach themselves. "Stupid" and "arrogant" are two that come to mind. It's enormously difficult to compete at an international level against top players. When you do, you are on automatic pilot. This is when all of those thousands of repetitions pay off. The notion that you can compete with 100% of your attention and simultaneously analyze your performance with the remaining percent of your attention should be obviously blatantly ridiculous for those of you who passed third grade math.

Jimmy isn't just any coach. He has a proven track record and a game plan. I don't say this just because I like him, although I do. The fact is, if you have players on five Olympic teams, players who win gold, silver and bronze medals in the worlds and Olympics, then you do have some claim to knowing what you are doing. When he goes to these events, he has specific objectives for the players, what he wants them to do and what he wants to look for.

The second point he made, with which I agreed, was that those players would not just fly in, compete in the tournament and go home. They were going to stay and train for a week, working out with the players they fought in the tournaments. He also thought that the style of the competitors they would train with in practice was similar to the style his players would most need to learn to beat, especially given the new rule changes.

Where we disagreed, which is one place we always disagree, is that I think you shouldn't go to a tournament unless you have a solid chance to win it. Yes, anything is possible but if your possibility involves your entire division, minus you, taking the earlier bus to the venue, which is then commandeered by a crazed serial killer who mows them all down with a machine gun and then eats their livers - well, I would say that does not fit my definition of a solid chance to win.

Jimmy thinks it is important for people to get matches and to get experience fighting players at the top level. He says that the players he wants to take have all improved dramatically in the past two years (I agree there), that their judo has gotten significantly better recently (I haven't seen them recently, but if he says it, I am sure it is true), that he certainly doesn't think they are so far out of the running at these tournaments that they will be an embarrassment to the country (I also agree there).

I am still unconvinced. Definitely what he is planning is smarter and better than what we have been doing. He was too polite to ask me if I had a better idea. I am not sure. I might. I am hatching one.

Something one of my professors said thirty years ago, and I have never forgotten,

"Ladies and gentlemen, we must always remember that while Burroughs had all of its engineers at work inventing a better adding machine, Steve Wozniak was in his garage inventing the Apple computer."

Jimmy is an amazingly great coach. He's designed an adding machine better than anyone else. If I was an athlete, at this very moment, I would do whatever he said because it would be my best bet.

What we really need in this country, though, is a computer. Excuse me while I go out to the garage ...
Posted by Dr. AnnMaria at 3:46 PM

First, don't go just to go get beat up on and come back home. If you are going to travel. Travel with the intent to go on an information recon mission. Take notes, analyze your performance, use the trip as part of the sequences in one big humongous feedback loop and make the necessary changes when you come back home. The problem is that no one makes the adjustments when they come home.