Slowing Down at the Finish Line

Imagine this scene ... you are watching a race, say a 10K (that is 10,000 meters for you mathematically challenged, which is a little over six miles). The runners start out fast, vying for position. It is, after all, a race. At the half-way, they are still running like bats out of hell, assuming that the bats had decided to run instead of fly. This being the nature of a race, you are not surprised. Two-thirds of the way through the race, a couple of people start jogging. Concerned, you look to see if they have pulled a muscle. Nope. They have just decided to start jogging instead. The last half-mile, most of the people are jogging. By the time they get to the finish line, one person is still running. He wins the race. The rest of the people are jogging, walking fast or a couple are even walking slowly, like a stroll in the park.

Now, you are probably asking yourself, what the hell kind of race is THAT! This would never happen. If it did, you can imagine the coaches losing it and screaming,

"Johnny, RUN, damn it! You're in a race! What the hell are you doing?"

Normally, I would not condone coaches talking to their players in that manner, but as your runner strolls toward the finish line, I think you could be forgiven for, to be frank, losing it.

What has all of this got to do with judo? Too often, I see players stroll toward the finish line. I saw an example of it at practice on Saturday. Practice started out well. We did our conditioning indoors, started with speed uchikomis, throwing drills for speed, over and unders and generally had a good morning workout. The afternoon started well with technical instruction on matwork, then several rounds of matwork. Then, as we went on for several rounds of randori, people started to slow up toward the finish line. We had people hiding in the corners trying to get a round off. A couple of the youngest ones were in tears. The older ones, being smarter at slacking, walked around the mat in that "I kick at your foot and we call it ko uchi gari" type of randori.

So, Tony and Gary "lost it" a little bit. I put that in quotes because they did not swear at anyone or do anything inappropriate and they were absolutely correct. Tony had the entire team do push-ups and then he, Gary and Eric Sanchez each said their piece. Tony said it well,

"Winning is about focus. That's true in life, in competitive sports. If you lose your focus, you make mistakes, whether it is on your job because you have a lot of distractions or in a tournament because you are nervous. Here is where you learn to focus, at the end of practice, when you are tired, when you have been going for a long time, you keep going, you don't give up, you don't lose your focus. Learn it here, now!

"I am here to coach. I'm not here to be your friend. You want friends, go to the playground and find one. I don't need any 11-year-old friends. I come here to help you get better and that's the only reason."

"The unique thing about this place is it's a TRAINING program and people are supposed to train here. You guys are here because you are supposed to be able to train harder than the average person. You have an opportunity, don't waste it."

Think about this. It's all words of wisdom, really. I didn't say anything because they said it all well. 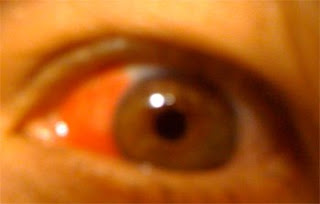 I do really like this team, though. Working out, someone hit me in the eye. This is how it looked two days later. At the time, it looked pretty gross. In fact, the only reason I am staying home writing this blog is I could not put my contacs in so I couldn't drive to work. The funny part is, several people came up to me at practice and asked , "Who did that to you?" in a tone implying they were going to take apart whoever did it. I was very touched by that considering that about half the people who asked me came up to Tony's navel. If I had pointed at Tony, I would not be surprised if they would have gone after him. And no, Ronda, before you post that you don't care if it was Tony or Eric and you are going to come to the training center and teach people a lesson, to whit,

"Don't poke my mother in the eye."

I don't know who did it and whoever it was, I am sure it was an accident.

Other random unrelated stuff, Growing Judo is coming out soon. Jim Pedro's article on coaching juniors under 12 is pretty good. He talks a lot about the need for drill training and had some interesting ideas on competition for kids under 12.

Related to this, we have TWO technical sessions coming up. In addition to practice next Saturday, February 28 at our regular times (10-11:30 and 1-4) we have Terry Kunihiro coming at the end to discuss the rule changes AND on March 1, from 10-1 we have Dr. Jake Flores giving a clinic on combinations and counters. THEN, on Sunday, March 8, we have Kenji Osugi and Hayward Nishioka teaching a clinic on foot techniques. We may have some other special guests as well. If you bring Hayward's book on foot techniques (published by Black Belt), I am sure he would be happy to autograph it.

Reminder: Don't slow down at the finish line!

A while back, Ronda posted on her blog about how coaches think athletes are deaf. Now, you all know why.
Posted by Dr. AnnMaria at 11:36 AM

As a Deputy Sheriff here in Bakersfield, our Defensive Tactics Instructors (which by the way is based on Judo)have the same attitude with us. And we are grown men and women that carry guns! But they simply explain that the people that are our opponents are possibly trying to kill us, or are at least thinking about it.

So there is no time to slack off in that kind of fight because the second you do, the bagpipes will play and a long procession of cop cars will follow.

If you could teach someone shorter than your Obi about how to cross that finish line the way they started it, than you have done a great service to them.

This woman competes in a Bjj competition with only one leg.

What other excuses can slackers think of?

Wow! Carlos, that is so cool.

I recently came across your blog and have been reading along. I thought I would leave my first comment. I don't know what to say except that I have enjoyed reading. Nice blog. I will keep visiting this blog very often.