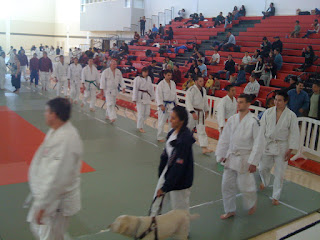 I haven't written in a while because I have been really busy traveling. First, I was gone for several days for work, and fit a couple of judo clinics and visiting my daughter and granddaughter around that. When I returned there was still more work since everyone, their aunt, their uncle and their neighbor's guinea pig are applying for the NIH Stimulus grants due in about two weeks by 5 pm local time. On top of all of that, I flew up to San Francisco to watch the national novice and brown belt championships. It is past midnight, technically Easter morning, and since the eggs are colored and the baskets hidden, I finally have a chance to breathe and also to blog.

In no particular order, here are a few highlights of judo life over the past couple of weeks. I was talking to Mark Hunter from Ohio this evening and he commented that judo in this country is withering and that people who look at being on the USJA board of directors as a source of "power" are completely illogical.

I agree in general, but I have seen some hopeful signs of judo around the country. Easter, spring, new life and all of that, and I am reminded of when I lived in North Dakota and you would see new plants sprouting up in tiny shoots from the snow. One of those new developments is the tournament I attended in San Francisco. As Tom Peters said, there is no incremental way to excellence. You need to come up with a whole new concept to move from a stagnant organization to an excellent one. Here is Mitchell's excellent idea .....

Many people start judo as teenagers or adults. There is really nowhere for them to compete. If a 15-year-old who started judo last year enters the junior nationals, by the second round, at the latest, he is almost sure to hit someone who is a brown or black belt and has been in judo several years. Even if our newcomer has great talent, he is going to lose. This is even more true for a player who starts at 23 or 32. Once that person passes the novice level and enters the brown and black belt division in local tournaments, he or she is going to run into players who have 10 or 15 years of experience. For anyone who wants to compete, it is going to be a series of losses, often to people who aren't training nearly as hard as our newcomer, but who have put many years into the sport previously. Many of us "running things" had those 15 or 20 years in and we don't really think how frustrating it must be to someone to continually lose despite coming to practice regularly and training seriously. These adult students are precisely the people we want to stick around to get black belts, become teachers, run our tournaments, referee and coach.

Mitchell's solution was to start a national tournament for them. It was a brilliant idea. He teaches at City College of San Francisco and his students do everything from announcing to pooling to running the tables. It is great experience in organization and management for them, the sort of experience students don't often get at exclusive private universities, much less community colleges. For the competitors, the tournament is very encouraging as it gives them the opportunity to test themselves against their peers. Especially for women, they get a chance to compete with others of their weight and rank, instead of being thrown into pools with people bigger and much more experienced.

Mark Hunter is another one of those guys who is growing judo in innovative ways. Twice, he has held the USJA National Coach Symposium in Ohio. At the first event, in one of those funny six degrees of separation, the keynote speaker was Maurice Allen.

Now, Maurice is a several time European champion in judo, and was also a national champion in freestyle wrestling and world champion in sambo wrestling. One of the cool ideas I got from his club was the game of Dodge Ball. 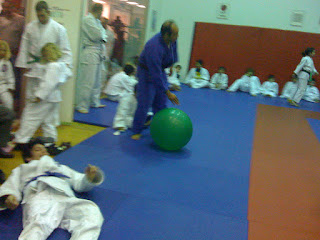 As a warm-down activity, the children move around the mat, sliding their feet facing inward, outward, running forward and backward, but the exercise is improvised a little by black belts who throw large balls at the children. I have written previously about the importance in judo of kinesthic awareness and here is a fun way to develop that along with aerobic conditioning. Some people believe that being a serious competitor is incompatible with having fun at judo. I believe that nothing is further from the truth and I am glad to have Maurice as one more data point supporting my hypothesis. 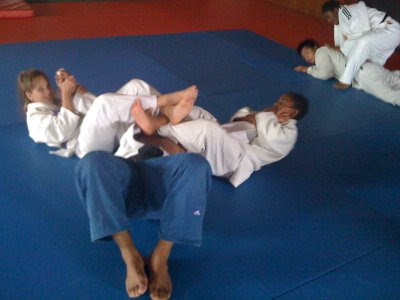 Then, there are Gary and Tina who I think are smart because of the things they do and the questions they ask, respectively. When I first brought up the idea of a training center for those athletes who had potential but who had not started judo young enough, won tournaments early enough or were not old enough for the "elite coaches" to bother with, Gary saw my point right away. He had been at Venice once or twice a week when Ronda was a little green belt ankle-biter and knew full well how no one but me and my friends had paid her any attention. He could see how other kids could benefit from having the opportunity to have people in addition to their home coaches guiding them and who could get better with more practice if there was just a regular practice that was convenient for them. He also understood that, while having clinics is a great idea and useful for players, that it is extremely helpful to have coaches watching YOUR progress, who can tailor their recommendations for the throws and matwork techniques that you personally do. Gary is not completely brilliant, though, as you can see from the picture above. The two midgets, Julia and Erin, had progressed in matwork faster than Gary expected and when they got him in a double arm-bar today, he was stuck.

Tina's insightful question today came after I covered two topics, discussed below, under judo tips. She wanted to know why all coaches did not provide the same sort of analysis we do at the training center. She wanted to know, "Isn't this just obvious?"

I told her that everything is obvious once someone explains it to you. The idea of a lightbulb seems pretty obvious now but the human race went millions of years without electricity.

If someone grips both sleeves and holds you down so you can't attack with your seoi nage, o soto or uchi mata, they are most likely waiting for you to pull away, to go out, at which point they can follow you and attack with o soto gari, sode tsurikomi goshi or a foot sweep. The solution is NOT to go out but to go in. Attack with ko uchi makikomi, o goshi, an ankle pick or other throws where you go across, so you are not going directly against their grip as you would be if you pulled out.

PRACTICE THIS - I have said it a million times. During the tournament is not the time to be solving these problems. You and your coach should have solved them ahead of time and the tournament is just when you put those solutions in practice.

Think about it this way - if you are ahead, you can eat up the clock on the mat and not get a penalty, if you are "showing progress" which is sure the hell not staying in a shell. If you are even, you can change a defensive position to an offensive one and increase the chances the referee will give you a decision as opposed to turtle-boy. Then, of course, there is the possibility that you will be able to pin, choke or armbar your opponent, if you just ATTACK.

My opponent: It's what's for dinner.

Rest in Peace, Virgil Bowles
Posted by Dr. AnnMaria at 12:07 AM

Have you read _Talent is Overrated_ What really separates world class performers from everybody else?

I think it would appeal to you and it is in most libraries by now. Geoff Colvin is the author.

Nope. Haven't read it. Sounds great. I will have to check it out as soon as I get this grant done. I agree, talent IS over-rated.

It's not Maurice Allen but Allan!!! and after some enquiries on the net, he had never been european champion in judo....everyone makes mistakes! ;)

Yes, I always mix that up. I know he was different levels of champion in freestyle, sambo, judo and even something called Scottish backhold wrestling which I haven't the faintest idea what is. I got all of this info from other people. Maurice never mention any of it. When I asked him why he said, "Ach, that be a long time ago."

You provide interesting insights. My son (19) and I (51) just started judo with Maurice Allan at Sport Judo. I do not think that I will ever compete, my son maybe, especially with the typical field of contenders laid out as you described. However, I do not find that the probability on not competing to be an issue because we both really enjoy the sport. Although, I would enjoy less bruising even more. Thanks for your thoughts and observations.

it wasn't that long ago that MY dad got knighted by Queen Elizabeth herself.


FYI he would have gotten a gold medal in the Olympus if bloody Prussian hadn't of broken his ribs.

Pretty effective piece of writing, thanks for the post.