Jim Pedro, Sr. and I have an actual contract with Black Belt Magazine to finish The Book by mid-July, so I have been working on it pretty regularly. The latest chapter has several matwork combinations, about equally divided between ending in an arm bar, pin or choke. Jim wrote that chapter so I am editing it and putting the finishing touches on it. 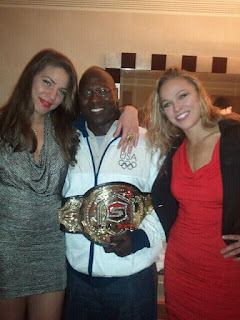 A couple of weeks ago, after Ronda's fight we had a small party for family and friends and the inimitable Dr. Rhadi Ferguson, a teammate of Ronda's on the 2004 Olympic Team, stopped by. He asked how the book was going and what it was like having Jim Pedro, Sr. as a co-author.

I get asked that question a lot. I guess we are an odd couple to be co-authors. Jim is a retired firefighter. I have a Ph.D. and run a company that specializes in statistical consulting and customized software.

Jim travels all over the world coaching elite athletes to the point that judo has pretty much taken over his whole life. I still have a child in middle school, a business and I teach twice a week, once at a middle school in south Los Angeles and once with up and coming young athletes at the West Coast Judo Training Center.  If I'm traveling it is more than likely to give a talk on different model fit statistics in logistic regression.

"It's great, but if you read the book, it is the opposite of what you would think. All of the really cerebral, analytical parts were written by Jim and all the parts that sound like they were written by an ogre  - Bash him down, break arm - were written by me."


There is a reason for that, going back to the points above. Most of my judo has been designed around two people, me and my daughter, Ronda. I read a wonderful line once,

"Every elite athlete is an experiment of one. They are outliers on the distribution of humanity."


Jim has to develop techniques for a wide range  of athletes at the elite level, while I only needed to come up with what would work for local and regional level players, for me, and later, for Ronda. Some techniques do work at all levels. The o soto gari (outside leg sweep) that Ronda used to win her first tournament at 11 years old, also won her matches at the world level in both judo and mixed martial arts.

There are also techniques that work better for some types of athletes than others. I wrote about the role of strength in judo competition a while back and the fact that my techniques tend to rely on strength more than those Jim teaches, which is kind of opposite of what you would expect, given that he is a big, hairy, scary body-builder looking type of guy and I am just the perfect size to be shipped in a box.

Step 1: The opponent is on her hands and knees. Either she attempted a throw and missed or I attempted a throw and only succeeded in knocking her to her knees.  If she hangs on, I am going to "help her up" -  a move I cannot believe I did not show on here previously but I can't see that I did - where I slam her to the mat. Since she is not stupid, she let go.

Step 2: I am going to reach between her legs and grab her belt or as high up on the jacket of her judo gi as I can get. I'm going to pull up with her belt and push her head down at the same time, trying to literally roll her head over heels.

Step 3: This is a really stupid move. Almost anyone can stop it by putting an arm out to post.

Step 4: When she does that, I am going to catch the arm she puts out to stop herself and arm bar it. (Didn't see that coming, did you?)

And THAT, my dear, is how I managed to arm bar dozens of people even when they knew to look out for the arm bar. 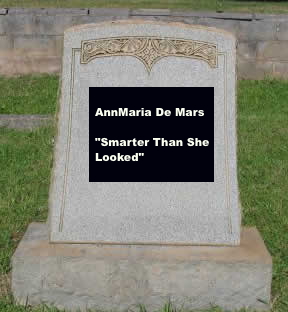 P.S. One of you people at the training center remind me to teach that and take pictures this weekend. Also, the help 'em up move.

I think I saw Ryoko Tani do the "help them up" move once. They held on, started standing, and she did an osoto-gari. I was surprised her opponent was so naive.

I was wrong. Tani's opponent didn't hold on. She just started standing up in a way that had all her defenses down. The moment I was talking about is at 0:21 here:

It's so nice they show it twice.

I think there's a nicer color version somewhere, from a different angle, but I'm too lazy to find it.

I really want to see this sequence in action, particularly since I've been enjoying some success with that leaping roll over choke you described a while back.

I don't do straight judo but the idea behind this is really neat, and I can see how it could be applied in a bunch of different areas grappling (striking, too).

To the drawing board. Can't wait to try some of these out.

Jeremy -
I have seen the exact same idea applied in mixed martial arts and grappling. I haven't watched striking (boxing, karate, etc.) that much but it certainly would seem that the same principle would apply.