I was teaching judo at Gompers Middle School today. The students were working on arm bars and I showed José and Sergio this one because it is kind of a show off arm bar and they like that sort of thing.


We also worked on o soto gari (major outside leg sweep) which I was astounded to realize I had not taught yet this semester, and then we did a few matches.

After the matches, I stopped the class and had a short discussion. Two of the kids in the class are not the typical athlete, but they have been getting much better since the semester began. One is an excellent student, particularly in math. The other, Ryan, I don't know well enough to say, but I like his attitude.

Anyway.... during the matches, both of these boys started laughing. They got knocked down and they tried to make a joke out of it, rolling around like they had just gotten pushed over. Just for variety, I took an idea from Sawtelle Dojo, and had them go one minute standing and then one minute on the mat. One young man probably tapped out four times while he was on the mat but because the match lasts a minute on the ground, I kept re-starting them.

Then we had this talk, which I self-censored, given the age group, but I'm giving my uncensored version here. 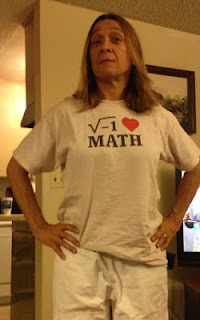 Listen up! Shit's hard. That's a fact. You have all been in classes where people are asked the answer to question, like, "What is 5 x 6?" and they try to make a big joke out of it. They turn to their friend and say, "I don't know that shit, ha ha, do you?" That's natural. People laugh when they feel uncomfortable. We even have a saying for that, "Laugh it off". It's really hard to fight when you're laughing. Maybe that's why so many comedians come from tough neighborhoods. In here, though, when you are fighting, it's not funny. So what if you get knocked down. One thing that you guys who were getting knocked down did, after I stopped the match and talked to you about it, is that you got up again and again. When you got on the mat, you kept fighting. That's good. That's the important part.

You know what I do all day? I write computer programs. I wrote a computer game to teach math. Just sat down, and made what was in my brain come up on the computer. People say, "How do you do that?" and I tell them this, it's just like a fight between me and the computer who gets our way and I am not going to let the computer win!

One of the things you will learn from judo is this - don't give up when it's hard. Don't laugh it off. It's not funny. You're going to win. When I started judo, there were lots of people who could beat me, but I just kept working at it. The same is true of math. I just never gave up and kept banging away until I got good at it. Some of my doctoral students I've had over the years haven't learned that lesson in life. They'll get frustrated and complain when learning multivariate statistics,  "This shit's hard."

I am really busy between the beta test for our game and teaching at Pepperdine both happening this semester. Almost every Friday, I think to myself that I really don't have time to teach judo, but every time after I spend an hour and a half with these kids, I'm really glad I did it.

Sooo...I'm confused about what the lesson was here.

The lesson was that if you don't give up, even when it's hard, you will be successful.

I love the shirt, and the lesson too

hello, i write computer programs as well. how do you write your math programs? what language and platform?

maybe i could help you out with programming =)

hello, i write computer programs as well. how do you write your math programs? what language and platform?

After a practice where I was having a particularly frustrating time, one of my first Judo instructors told me "Of course Judo is hard. If it was easy, it wouldn't be worth doing!"

It rings true in all sorts of spheres of life.