Mom advice on judo and life

Don't expect appreciation. Whether it is helping out at a tournament or teaching someone how to do an arm bar, do things either because you want to do them or because you think it is the right thing to do. 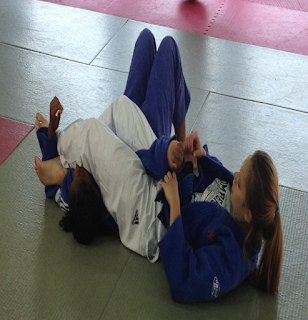 Most people have an egocentric view of the world. Of course you will help them because they are so awesome/ talented/ fun to be around. They may just consider the fact that THEY enjoy running a tournament proof that it's enjoyable and expect you to enjoy it, too.

If you go around expecting appreciation for the things you do, you'll end up bitter. Do what you think is right and forget about it.

I teach judo because when I was young people taught judo to me - for free. It made a huge difference in my life and so I try to pass that on when I can.

Don't lie about your achievements. I know people who claim to have competed in the Olympic Trials or won national championships earned a PhD when I know they did not. The irony is that these are all really accomplished people and if they just stood on their own honest achievements they'd be admirable enough. Lies are like interest on money, they accumulate. Once you have told someone you were in the Olympics/ earned a PhD, then you end up having to repeat that lie because it gets brought up again. Inevitably, someone will ask me about the time I was in graduate school with Dr. Joe Blow and I happen to remember Joe Blow dropped out and never finished.

Try to be empathetic. No, I do NOT say that in front of Joe to the person who brings it up. I'm not an investigative reporter from the New York Times. Personally, I think having your lie exposed regularly in front of people you (I hope) respect is punishment enough. Now, if Joe is claiming to be a surgeon and might do harm to someone, I will certainly speak up, but if he is a retired teacher who claims to have earned a PhD and competed in the Los Angeles Olympics, I'm going to keep my mouth shut. I really have no idea why people would claim such things, but I do believe everyone has a back story and there must be some reason he says those things. It would embarrass him, his family to out him and I don't see what good it would do. If it takes a lie to make people feel good about themselves, that's sad.

Don't exaggerate your accomplishments. I just looked at the last national championships results. In some divisions there were only 4 or 5 competitors. In some there were as many as twenty. That's smaller than the number of teams in a regional elementary school girls soccer tournament. If you won, good for you. Seriously, good for you. Judo is not an easy activity and you were best of the people who showed up. However, if you equate it with winning an NCAA championships in track, you are seriously deluded. There aren't more than a couple of dozen clubs in the country that care about winning national championships. A couple dozen is probably being generous. You accomplished a difficult task as a result of your own talent, discipline and effort. That is an admirable achievement. All over the country, every day, people accomplish difficult tasks through the same combination. All of them have achieved an admirable thing. My point is not to confuse being brilliant with being "brilliant above all others". This is very good advice for life as well as judo.

Speaking of which, I have to run because I'm teaching at 2 this afternoon in Bellflower, whether you all appreciate me or not!


Whilst it may not be quite the same point you're making...

Reasoning for the 'lying, exaggerating' - and the subsequent empathising, may be quite easily surmised...However, it's the 'doing what's right - and forgetting about it' that intrigues me more.

So often, in my erstwhile years, I'd wondered about the word 'altruism', proper. And, if it appeared only as a descriptive noun of a actual act for - I suspect - only a fraction of the occasions that it's supposed that it had really occurred? You see, I didn't think I'd truly witnessed it much, until recently, where I saw it first-hand within a radio assignment I did; where upon I observed real charity-workers in their aiding of the sick and elderly (too long-winded for specifics, on this platform), working altruistically for no apparent return, or discernible source of reward. Of course, this goes on around the world, thankfully!

Being no Father Teresa, myself, I've so admired the notion of altruism; and would've liked to pay it forward, or send the rope back down (like you, Dr.) on occasion; but, posts like this - and the aforementioned due-diligence and care of the workers helping the aged - brings it home to me, that I really haven't had either the opportunity, time, taste, temperament or inclination, to do so - without some sort of appreciation, even if it is just a "thank you, Gene". Just wanting to be thanked, at least verbally, must be what appeals to my ego; creating my moral dilemma?
Shameful? I think it might be, in many cases. As for "doing what you think is right": I've always found this part quite easy, and reassuring, somehow. Forgetting about it? Well, I promise to reconsider my 'nothing for nothing' approach, sincerely.

I hope my skew-wiff, and slightly convoluted, unsolicited contribution is of some benefit to your noble post (now, will madam being paying by cheque, or cash, today?) lol

My Black Labrador, Remy, wanted me to ask if their is a tutorial video, or something available on here; that would aid her in warding-off the amorous advances of Biffo, the Bulldog from next door...She wondered if you might demonstrate this "Willie Nelson" that she's heard so much about - in a future blog?
Sincerely,
Much love,

I would say some of what I do is altruistic in that I expect no return, but I feel as if I AM returning kindness that has been paid to me, sometime by people who have passed away years ago. Since there is no way to pay them back, all I can do to show my gratitude is to follow their example and help others when I can.

You know, it really isn't "nothing for nothing" in my view. Since people helped me when I was younger it is something now to pay back the something given to me then.