It's popular to say that martial arts build character. I don't know if that is true. I know plenty of people who are good at judo or jiu jitsu who are jerks. 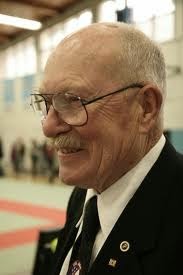 I was sad to hear he died this week. Rich was a fixture in the judo community for years and I must admit I have no idea if he was actually any good at doing judo or not. I never saw him on the mat engaged in the physical activity of throwing, pinning, choking or arm barring anyone.

I did see him referee plenty of times and he was an honest, competent referee. He never refereed at the Olympic level, and he once told me that was not his goal because other things, like his family, seemed a much more worthy outlet for his time and money.

What Rich was best at was being a good man. He definitely could have had a higher judo rank or higher level of certification as a referee if he was willing to cut ethical corners - join whichever organization was offering to promote him that day, overlook it when a referee was accused of molesting underage athletes.

Judo is full of people who act tough but won't really stand up for anything. They watch officials, coaches or athletes get away with breaking the rules, mistreating people and every kind of unethical behavior and do nothing.

If I had a dollar for every time someone said, "I'm going to kick ass" and then when faced with the person responsible, muttered, "I need the funding to compete international. They could keep me off the Panamerican team." or some other Mickey Mouse garbage, I'd be hiring 10 more people to work here at 7 Generation Games with my pile of money.

Rich was the opposite of that.

If I only had two words to describe him it would be "quiet integrity".

I knew him for decades and I never knew him to cheat at anything - on his wife, in a match, on anything. He and I sometimes disagreed on elections, on policy, but I knew they were always honest disagreements, not because someone had paid him off or made him a deal.

At the same time, he had a strength and resolution I don't see in many "tough guy" martial artists. Many years ago, California Judo, Inc. was having a meeting and one of the members of the referee commission was trying to get away with something  - there have been so many dishonest dealings in judo over the years, I don't remember the details of all of them any more.

Rich decided to go on vacation in southern California and walked into the meeting. Rich had been counsel for the U.S. Judo Federation for many years and was well respected as an attorney. All of a sudden, the people who were going to vote on motions that were blatant violations of the organization by-laws changed their minds.

Furious, the referee chair cornered Rich afterward and told him that he was never going to move up in the ranks as a referee, that his promotions would be blocked and so on.


and we went out to have a lovely lunch.

He will be sorely missed.

Those who stand for nothing fall for anything - unknown. It appears Richard Muller always stood for something…integrity. RIP

Martial Arts does build character, but Judo isn't a Martial Art. It's a sport.

Wow, Doc, sorry to hear about your loss! He sounds like a really good man and it's cool for you to honor him. You'll always have memories to look back on of a man who showed you that true integrity does exist!

Martial arts does not build character, it reveals it.........