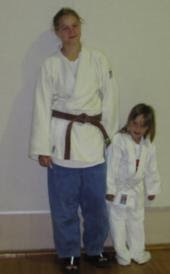 It's a fact of life, but a lot of us don't want to deal with it.

My whole life is changing right now. In the past year, I have left my judo club, started up the West Coast Judo Training Center, left my company and started a new company. The housekeeper we have had for ten years is leaving - a ten-year-old really doesn't need a nanny. My second daughter graduated from college. My first daughter is married and having a baby. With all of that, my expenses shrank so that I certainly don't need to work at the pace I have for the last 35 years.

Life changes. Why should judo be any different? We are doing a lot of things differently in California and around the country. This makes some people furious. How dare we say that we need a training center in southern California or that we should have a Great American Workout in New York and now they're talking about a USJA/USJF training center in northern California. Where will it ever end? Judo board positions are being held by upstarts like me and Ed Shiosaki and other youngsters (in the judo political world, folks under age fifty, like us, are young punks). Ronda is coaching at the training center - how can we invite a 20-year-old to be a coach?! Frankie and Eric Sanchez are in their twenties and running Guerreros Judo Club. What is this world coming to? What would Jigoro Kano think about blue gis, women not wearing white stripes on their belts and people who do not do kata exactly as it was done in 1937?

Years ago, I was teaching a course on the Spirit Lake reservation and some debate occurred about what medicine men really could do and couldn't do back in the days before the white men came. Some of it sounded a bit like these people waxing on about the history of judo and how Kano's original students could breathe under water, fly and do a perfect nage no kata all at the same time. The students appealed to one woman in the class who spoke Dakota and was widely regarded as an authority on Spirit Lake culture. She normally was very quiet but when the other students kept pressing her for an answer, she finally stood up and said,

"I don't know if all of those things they said happened in the old days really happened or not. What I do know is that those days are dead and gone and if we don't change to accommodate the world today, we are going to be dead and gone with them!"

We have a history in this country of resisting any changes to judo, whether it be new members on a board, new concepts, new clubs. We always hear people saying that they want judo to grow but when one of their students leaves and opens a new club, they are FURIOUS. Apparently, they want it to grow somewhere else other than where they are. I don't know how many times I have heard someone go on about how karate or tae kwon do or Brazilian jiu jitsu is everywhere, with a club on every corner, when we all know judo is so much better. Then, when their student opens a club on the next corner, they take it as a personal insult. How dare you open a judo club? Are you saying you are as good an instructor as I am? Are you saying I am not a good enough instructor so you need to open a judo club and teach people?

Maybe they just want a change. Maybe they had an idea you didn't have. Is that so horrible? Maybe they had an idea KANO didn't have. An older man once asked me, very pompously and self-righteously what would Jigoro Kano think about a woman being vice-president of the USJA. I told him I didn't care what Kano would have thought. The man turned an unusually bright shade of red and it appeared as if he was going to drop dead of a heart attack on the spot. That would have been an interesting change, but it didn't happen.

Kano was just a person. He wasn't God. As Billy Joel said, the good old days weren't always good and tomorrow aint as bad as it seems.

Tomorrow - here are some ways we can change for the better, I think. Encourage your younger black belts to teach. Take a vacation and leave them in charge. If one of your students wants to open a new club, be supportive. Take it as a reflection on the great job you did developing future leaders. Here's another thought - boot them out. When my kids graduated from high school, they had two choices; get a job or go to college. Hanging around the house wasn't one of them. We expect our children to grow up and leave but we get irritated if someone from our club goes out and starts their own program at 45.

Do we eat our young? In judo it seems to me that not only do we seldom encourage our teenagers and young adults to take over, but we actively discourage them, undermine them and denigrate them. No wonder they don't want to stick around.

My daughter, Jenn, is thinking about having her boyfriend move in with her. I was very tempted to fly up to San Francisco for the weekend and insist that she bring "the boyfriend" by so I could meet him. I almost did. The more I thought about it, though, I realized that Jenn is a college graduate, she has a job, pays her own bills. You know that old saying parents always use,

"As long as you're living under my roof and I'm paying the bills, you'll go by my rules."

Well, it dawned on me that Jenn is not living under my roof and I am not paying the bills and she really doesn't have to live by my rules. I still don't think it is a good idea for people who aren't married to live together but it isn't my decision to make.

At some point, we have to trust young people to take things into their own hands. If we want judo to grow, we need to let our young judo players and coaches grow. Yes,I am sure they'll screw up sometimes. Maybe they'll cohabit with a tae kwon do or Brazilian ju jitsu or, God forbid, a mixed martial arts school. They'll make mistakes but they'll learn from them.

And things WILL change. Deal with it.

I bet you think I am going to say that you need to be able to attack at all different tempos. Well, that would be nice. I was never that good. Even when I was young, I was not particularly fast. My solution was to realize that and work around it. I was strong enough that I could just clamp down on the other person and hold her still, or at least slow her down to my comfortable pace. Andi Bongert is over 200 pounds. She is an honest heavyweight, not a fat 70 kg player. After watching her compete the first time, I asked her,
"What the hell are you doing? If you have 70 pounds on your opponent, don't run after her. She's faster than you. Go to the middle of the mat and stand there. She has to come to you. When she does, nail her with that uchimata."

Here is an important aside for coaches - I look at someone and think, "How would I beat that person?" Of course, I would tell any of my players to get her moving, speed up the tempo. So that is exactly what I tell her to expect and not allow to happen.

When in the match do you attack? Right off the grip? As you grip? (Those are two different things, you know.) Do you counter when the other person attacks? Do you catch people on the way out after a failed attack? Do you always attack right at the end of a match when the other person is letting up, coming in with a flurry of attacks? Unbelievably, I have seen people who always take two steps and then attack on the third. Even more unbelievably, they will beat the same person more than once. I want to go up to their opponents and yell,
"What is wrong with you? Are you and your coach each sharing half a brain? Attack on the first step, or the second step, and that person will never beat you ever again!"

But I do not say anything because I am humble and lovable, just like Underdog.

What grip do you attack from? Double lapel, sleeve and lapel, double sleeve, from an arm drag, or a hand off? What do you do if you cannot get your preferred grip?

What are your favorite techniques? What set-ups do you have for your favorite techniques? Jim Bregman and I once went back and forth for over an hour on whether all of judo ends in uchimata or juji gatame. He showed uchi mata from seoi nage, tai otoshi, o uchi gari and just about everything else. I still believe I won, though, because he did not have a tate shiho gatame to uchimate combination. I, on the other hand, showed juji gatame from seoi otoshi, morote seoi nage, tomoe nage, tate shiho gatame and while balanced on my head. (I am not making this up.)

So... what other types of variety can you think of? Why? Because every variation is an opportunity for you to attack and you should be able to employ lots of different directions, tempos and combinations so your opponent never knows for sure what to expect. You should also learn to defend all sorts of variations because, believe me, you don't want to be trying to wing it in the middle of a match.
Posted by Dr. AnnMaria at 5:08 PM

But in general, have you seen in olympic preparation judokas and wrestlers togheter. Who won most sparring matches? Could judokas throw easily wrestlers? Coud they choke and armbar them?

I'm from Guerrero judo club stop comparing 2 of the most hard working sensei's you will EVER know, too men who are older....blogger..? More like uncool talker.

I think you missed my point. I agree, Frank and Eric Sanchez are terrific. I have known them since they were born.