Sometimes Low Self-Esteem is the Result of a Realistic Appraisal 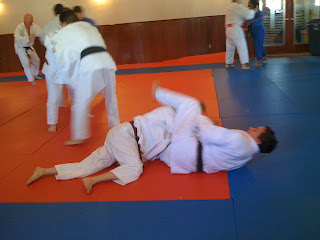 Today's blog advice is on success in marriage and judo, in that order and not necessarily together.

Today, I had an epiphany regarding beta-weights and partial derivatives.
Of all of the people I know, Dennis is the only one who would not say,

"What the hell are you talking about?"

(If you are really interested, which you probably are not, you can read about it in my other blog, which includes a lot of posts on statistics.)
I suppose I could have married someone who would tell me every day how brilliant I am. I know people who wanted an adoring fan for a spouse instead of a partner. They needed someone to tell them how wonderful and perfect they were. Too late, they realized that a person who worships the ground you walk on, who never pushes you to be more than you are or calls you out for mistakes you made probably has some really serious issues of their own. Did these people never pay attention to the cardinal rule,

"Never sleep with anyone crazier than yourself" ?


(No, not even if they are very good-looking and tell you that you are the smartest, toughest, most talented person in the universe. I don't know who that person is, but it is not you. Trust me on this one.)

Accept that you are sometimes only average and even sometimes less than average. Welcome to the human race. Don't hook up with someone who strokes your ego every day just so you can feel better about yourself in the short run. Remember, as a friend of mine said,

"It is better to have loved and lost than to have married a psycho."

There was a discussion on the Judo Forum this week about who has a chance to medal in the Olympics.

I am not going to comment on any individual because as I said on the forum, for all I know, they are all wrestling cougars every night and dragging 300 pound sleds up mountains every day preparing for the Olympics.

I do know that when people are NOT training to be best in the world it is no favor to them to pretend that they are. A few years ago, I told Ronda that I knew what training to beat the world looked like and what she was doing wasn't it. I told her I wasn't going to give her any money and even suggested if she wanted to train half-ass and see the world that she book her tickets on Travelocity. Ronda did not take this well. In fact, for a while I was an evil old woman while everyone else was her new best friend. When you love people a lot, you tell them the truth, if you think it will help them, even if they hate you for it temporarily.

All of those people who have been told by their coaches, teammates and "friends" that they are training smarter, not harder, that they don't need to train anywhere outside their own club or city, who believe their own press, who believe that you can win internationally without being sore, hungry and uncomfortable ON A REGULAR BASIS - have been sold a bill of goods. Being successful at anything means going outside your comfort zone, sometimes failing and being able to face up to that fact.

Crystal Butts is my favorite judo player this week. When I asked her how she did at the tournament on Sunday, she answered,

"I got my butt slammed. I'm not going to make any excuses."

When she overheard me say to Julia that she needed to ratchet her training up a notch, starting now, Crystal interjected,

"Me, too. I'll be picking it up with you this weekend." 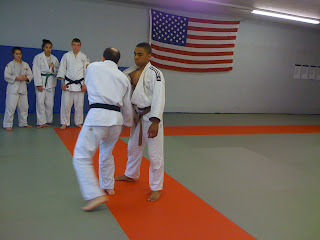 Serge, shown above teaching seoi nage,commented recently that I tell the same stories over and over. Ronda laughed and reminded him that she had been hearing those stories all of her life. I do that on purpose and not due to early onset of Alzheimer's. In Latino culture there are "dichos", sayings that grandparents tell their grandchildren over and over in an effort to shape their character. Even though my grandmother passed away nine years ago, every time something difficult happens in my life, I hear her voice saying with complete assurance,

"God knows what he is doing, mija."

My grandmother did not put much stock in the latest self-esteem curriculum. She never even heard of such a thing. She told me,

I don't remember what it was that Nanny was chastising us about, but I do remember my Uncle Fred scolding her,

and I remember Nanny's unrepentant response,

Sometimes, you need to feel bad to get better.

People I forgot to credit:
The New York Times article I mentioned yesterday was part of a post in the Judo Podcast on dirty tricks and sportsmanship.
Posted by Dr. AnnMaria at 9:48 PM

AnnMaria...I got a kick out of your post today because my father did the exact same thing when I started slacking off, and even stuck by his word and stopped paying for competition, when I gave him attitude for it. In retrospect, it's been one of the best lessons he's given me.

I liked that. Thanks.

Hi, Stephanie -
I am sure your dad was right. Look at you, doing well at Berkeley and on your way to a successful career, I am sure. Or... you could have done judo half-way.

Next time I see Tracy I am going to to kick him in the shin. He used to tell me, "Watch that girl Stephanie at tournaments. She's really good and one day, Ronda is going to grow into her weight division and they are going to fight."

Ha! Yeah, Ronda grew into your weight division - for about 14 seconds - then she grew way past it.

I think you are like me, still waiting for your growth spurt.

If you can't realistically assess where you are today, or have unrealistic expectations about where you will be tomorrow, you will never be much more than a BRAT.

Unfortunately, most of America is at least a little bratty.