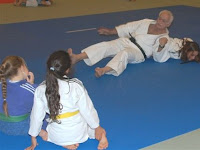 If my friend, old and seldom grumpy judo coach Bruce Toups, is correct and the best classroom is hanging around an old person, Ronda ought to have several graduate degrees by now.

Jim Pedro, Sr. has had Ronda training these past few weeks until she could barely do anything by the end of the day but lay in bed and watch movies for a few minutes before dropping off to sleep. She is often convinced that her tombstone will read:

"Here lies Ronda Rousey. Her coaches trained her to death."

As much as it would probably pain both of them to admit it, Ronda and Jim agree on a lot. Each Olympics we see people after the Olympic Trials whose goal was to make the team. They have met their goals and are satisfied, training no harder than they were before the trials. There is certainly nothing wrong with setting a goal to compete in the Olympics and achieving that goal. That's just not Ronda. Jim has had her training harder than ever, and one of his big areas of focus has been conditioning.

This week, he insisted that she watch the movie, Million Dollar Baby. (Short plot summary: Young woman wants to be successful boxer. Grumpy old coach trains her really hard, she progresses, but in the last match she is injured and dies.)

He told her she needed to get that attitude. One day, she turned to him during practice and said,

"We're working out harder than that girl in Million Dollar Baby."

Jim answered without batting an eye,

"Yeah, well she lost. That's why you're training harder than her. You're going to win."

I think people misunderstand Jim's focus on conditioning. It is not that he doesn't believe technique is important. It is that he understands that you can do more judo techniques when you are in condition. Further, sometimes conditioning can make up for less than perfect technique. When I was younger, I often fought people who had better technique than me if you were measuring us like a nage no kata competition. If they could have gotten me moving, they maybe could have done a foot sweep or a beautiful uchimata. Unfortunately for them, I was strong enough to get a grip, lock them in one place, knock them down for a koka and do matwork. Who says matwork is not a technique? My matwork is full of techniques.

I can guarantee you this, the easy route doesn't get you there.

A few other lessons Ronda may have learned, these came from Bruce Toups, and I added in parentheses my advice.


Another bit of wisdom from Bruce was that I might want to consider retiring to the south because it is the only region of the country where, "He needed killin' " is considered a valid defense. I'm thinking about it.

USA Judo: A voice on the web - is a New York Times blog on, in an Escher-type way, blogging, and how it is changing how athletes can communicate about the national governing body
Posted by Dr. AnnMaria at 10:39 PM

Outstanding blog! One of my favorite web stops during the day!
Thank you.

btw, I am very happy to post this info....
http://www.usjudo.org/ThorntonResignation.asp