Random Thoughts on Judo in My Life

One of my things on 43things.com is to be grateful every day. This is actually pretty easy because I have a generally great life.

Today, we took Julia to a camp rally. The skit by the counselors was kind of funny, but the meeting was longer and more boring than I would have picked if I was Queen of the Universe. Still, the whole reason we were there is because we have this healthy, bright kid who is going to camp with a bunch of friends. When they said kids could sign up for a cabin together, Julia had three friends sign on her sheet. I know that part of her being happy, healthy and self-confident is judo. Part of it is the grace of God,and I mean that literally. I have spent much of my career working with children with disabilities and their families.

Julia got a good start in life and her family and community have helped her get better. Everyone from her older sister, Jenn, who brought her a new Roald Dahl book when she came to visit, to Kenji Osugi who lectured the kids last week on trying to be a USJF Academic All-American by getting at least a 3.75 GPA to the other kids at judo saying, "Yes, I got it last year", everyone encourages her and supports her.

On the way home, we stopped to eat because I was starving and, although I miss a lot of things about competing, I am so grateful that I don't have to cut weight any more. That is something I kept from judo. After a decade of cutting weight every time I eat I am grateful.

This weekend, after lunch with a friend, we were discussing how nearly all of the women we knew my age are 40, 60 or 100 pounds overweight. I am grateful that even though I eat peanut butter and chocolate yogurt with chocolate syrup, potato chips and a BLT for dinner, I still can wear the jeans that fit me when I was competing. It is because I do judo five or six hours every week that I can.

Speaking of random thoughts, I am certainly not saying we all need to be the weight we were at 23. I may be the same number of pounds, but I can guarantee you that those pounds are located in different places than they were 26 years ago. Still, I think people who are high-ranking judo instructors, who claim to have a sixth or seventh degree black belt or be some mucky-muck woohooshidan ought to at least make an effort to be a good advertisement for judo. People stop me all the time in line at the grocery store or as I eat a banana split and Ben and Jerry's and say,

"Wow, you're really in good shape, what do you do to work out?"

and I tell them that I do judo and tell them a little about it. Now, I know that what they are really thinking, is,

"The old wrinkled lady looks good for her age."

Still, that is better than what I am sure they thinking looking at some older "judo players",

"Dude! That fat blob is a seventh-degree black belt in judo. Whatever that judo stuff is, it obviously doesn't burn calories."

Come on, work out, try to be a decent advertisement for your sport instead of an embarrassment. 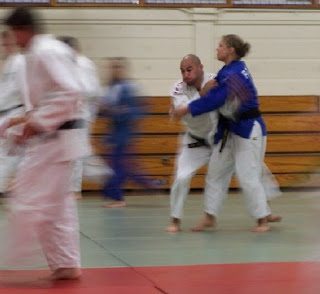 I watched a video of Ronda winning her first match in the Olympic trials. She was in a bad mood that morning. No, this doesn't have anything to do with what I was just talking about. Did you not read the title?The match lasted seven seconds. Just everything was going wrong. We didn't have time for breakfast. When the muppets sang about breakfast being the most important meal of the day, they were thinking of Ronda, who probably eats half her calories before 10 a.m. We didn't have time for her to shower. I don't understand why it is that these kids take three times as long to get ready as I do. It's not as if they have any more parts to wash or anything. Anyway, we arrived later than Jimmy wanted, she was hungry, needed a shower and Jim yelled at her. So, yeah, the match went pretty quick, and you can tell by the look on her face that at the end of it she was still ready to fight some more.

I am grateful that my little pumpkin is such a great judo player. These days, she is making all of the right decisions. Jim worries about her and pushes her hard, as he should, but she really is training to beat the world, and it shows.

I am grateful that she has her older sister around to keep an eye on her and balance the pressure to win a gold medal with babysitting and just generally admiring the fact that Eva Ortiz is the most amazing baby in the world.

On another random note, I ran across Keith Morgan's blog today. I wouldn't know Keith Morgan if I bit him on his cauliflower ear, which I just assume he has because hey, he is a judo player. His is unlike a lot of blogs on judo I read, which can be summed up as follows,
"MONDAY: I did judo today. Then I ate.
TUESDAY: I should have gone to judo but I laid on the couch and ate potato chips instead.
WEDNESDAY: I thought about going to judo but it was raining.
THURSDAY: I did 11 uchikomis today. Judo is hard. I ate a burger."

He's actually articulate and gives a good picture of what it is really like to be training. I was even interested enough about him after reading his blog to read and see that he graduated from McGill (for you Americans that is kind of like the Canadian version of Harvard or Yale) and that he competes at 100 kg. Maybe I will actually watch him compete in Beijing. I thought maybe he was 90 kg and would be on the same day as Ronda.

Speaking of Ronda, my tickets for the Olympics showed up today. No one else is going with me, I have to get my visa at the Chinese embassy this week, I will be sitting all by myself in the stadium but I expect to see Ronda get a gold medal so I won't mind if I have to sit on top of a garbage can.

Speaking of cauliflower ears, I don't have one. I am not sure how that happened since mostly all I did in judo was matwork. Someone asked Ron about that once. He said you don't get cauliflower ears if you are always on top. So, I smacked him. He protested that he meant it completely innocently but I knew him better than that.

Actually, I did get whacked in the ear plenty of times, so I think I have just been lucky, not that it really matters. I can't say I am so grateful that my ears are fine because I am pretty certain that men notice things about women other than their ears. In fact, if you asked my husband,

"How many ears does AnnMaria have?"

He would probably give you an answer something like this:
"

Two. That's the normal number, right? Wait a minute - is this a trick question? She doesn't have another one, like a third one, a vestigial one, maybe hidden under her hair? Is this one of those things like our anniversary and her birthday that I am supposed to know about but don't? Yeah, she has two. I'm definitely sure of it."

And he would be happy that he knew I had two ears. So, yeah, the cauliflower thing, that doesn't matter.
Posted by Dr. AnnMaria at 11:33 PM

Is this one of those things like our anniversary and her birthday that I am supposed to know about but don't?

I've had days when I was wondering if my wife's questions had to be answered like that. ;)

- there are far too many potbellies in the dan world

- There's nothing wrong with ending a match in 7 seconds. To me that just seems like Ronda's O Uchi at this point.

- Cauliflower ear is sexy. Fit women are sexy. Whatever age.