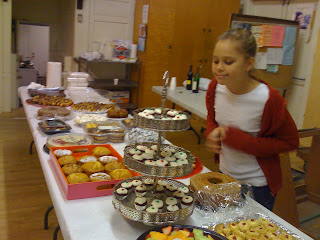 First of all, let me second Julia's opinion and just say, "To hell with making weight."

If you can't even eat Christmas dinner, then you are probably cutting too hard, too often and should really consider going up a weight division. People often make the mistake of assuming that they should go into the lightest possible division. On the contrary, you should go into the division in which you personally perform the best and feel the strongest, both technically and physically. Take Eric Sanchez, for example, who competed at 66kg and won quite a lot as a junior. Just a few years later, he won the USJA/USJF Winter Nationals at 90 kg. He looks a lot healthier and happier at that weight. Plus, I bet he gets to eat Christmas cookies.

This is the time of year for Christmas parties, Christmas programs and generally getting together with family and friends. As anyone can tell you, I am not the most warm and fuzzy person. In fact, there might be some truth to the rumor that I need a martini to sit through one more Christmas program with young children playing Christmas songs badly. However, having attended a vast number of such programs in my life, I have to tell all of you who complain about going, complain about the quality and complain about the work to put on such events - you are wrong. 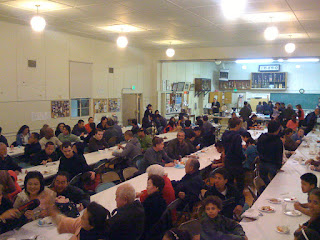 Community is important. It is important to get together, those people who are doing judo still, those friends they met in judo who rarely show up at the dojo any more, and family members who sat through a thousand hours in a hundred gyms, usually wondering what the heck was going on.

"Did he win? What does that gesture the referee just made mean?"

When we get together at these events we see old friends, people we knew and we remember how much we liked them and how smart they are. We see young adults and remember what bright, funny children they were.

A former competitor who is a very good judo coach once said to me,

"I have no interest in that Little League judo that you do. I know we need it or we are never going to have Olympic medalists, but I'm just not interested in it."

In my view, everyone who thinks like him is missing out.

These people aren't worth spending time with because one of them, or one of their children, might one day win an Olympic medal. They're worth spending time with because it's fun to spend time with kids who are smart, athletic, hard-working, respectful and have a sense of humor. Those kids usually don't come about by accident. They usually come from parents who are smart, hard-working, caring and interesting in themselves. One day, one of them may win an Olympic medal. Definitely, a lot of them will treat sick people, teach children, design buildings, cars or computers, start new businesses and employ a lot of people. Yes, and in the evenings, instead of drinking beer in front of the television set, they come and do matwork, or learn kata, fight with the same guy they've tried to throw every week for the last 15 years. (Okay, and then they go home and drink beer.)


This is a lesson that the judo clubs like Sawtelle, Goltz, Amerikan, Southside and other really large clubs around the country have learned and it is why they are some of the largest clubs in America. 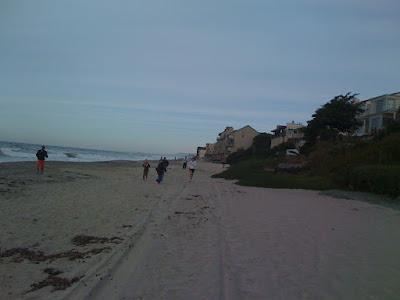 Also, I just wanted to mention, for those of you who are in the midst of a blizzard right now, that we had our second annual winter mini-camp in San Diego last weekend, with 17 folks from the USJA/ USJF West Coast Training Center making the trip. Tony Comfort made everyone get up and run on the beach at 8 A.M. It was cold, too! It was less than 60 degrees, like 58 or something and we were all freezing. So, you see, we feel your pain.

Other than that, it was two days of great judo with Dr. Jake Flores showing up to teach on Sunday and Paul Nogaki & Dr. Ruggero Galici on Saturday. Of course, Tony, Ronda, Gary and I were there, too, but we are always there, so I think our team appreciated the guests more.

The work out on the beach was a good idea, I have to admit, but next time I think it needs to start later, say around ten, after a few cups of hot coffee.

I think judo is like parenting. You can't replace quantity time with quality time. Notice that these players spent five hours practicing on Saturday and three on Sunday. They also had a conditioning workout in the morning. Over the years, lots of people have told me how much smarter than me they are, that I am just tough, training hard while they are training smart (whatever that means) or training with "the best coach in America" (I never figured out how a dozen different guys can all be "the best coach in America" isn't that a logical impossibility?)

There isn't a short route, there isn't an easy way and any coach who tells you otherwise is selling you a bill of goods.

Oh, and work on your counters. And combinations. Most people are not very good at either one, so if you could improve these four areas where most people are weak, you'll do a lot better in competition:

Combinations - especially front to back or back to front. This is an opportunity missed SO often competition.

Counters - ever notice that people who counter tend to favor a grip around your back or over the arm that is on their lapel?

Gripping - you should be able to break a grip you don't want and have a few means of getting the grip you want, just like you have set-ups for the throw you want.

Transition from matwork to standing. If I say this enough, maybe you'll practice it.
Posted by Dr. AnnMaria at 11:11 PM

OK, transition from matwork TO standing? My experience has been the referee does that for you!

What do you mean coach?

Okay, you caught me! It was a typo. I meant transition from standing to matwork!

Cool. A typo I understand! Going from a winning situation (i.e. matwork) to an even situation just didn't make sense to me!

Merry Christmas and a Happy New Year!
It's good to be back from Afghanistan!