Is it complicated? What do YOU think?

I was at a conference this week when the question of decision-making came up. One person was talking about deciding whether to go to one university or another and he said,

"It's a really complicated decision."

The man listening to him corrected,

"No, actually, it isn't. You decide which is the right thing and you do it."

That sounds good, but sometimes you don't have all of the information. I will tell you what I do know and you can give me your opinions. Please base it on what you KNOW, however.

In a nutshell, the Panamerican Judo Union has been the continental body for North, South & Central America for years and years. They run the Panamerican Judo Championships, select referees for the Olympics and probably some other things. The current president is Jaime Casanova, who I do not know, and Carlos Diaz, from Venezuela, who I have always known to be an extremely honest person with a lot of integrity. Recently, a number (I have heard numbers from five to 26 and have no idea the true number) of countries decided to form their own organization, the Panamerican Judo Confederation. The U.S. joined this organization and the director of development for this new organization is Jose Rodriguez, from the U.S., who has never done judo and had no connection to judo at all until about four years ago when he became executive director of USA Judo. Other members of this new organization are Canada and (I think) Mexico. This new organization is having a senior championships this weekend and the U.S. is sending a team. I spoke with the coach for one of the athletes who had no idea that it was not the PJU championships and asked me if this would be recognizable for points to the Olympics. The fact is there is even conflicting information out on what YEARS count in the Olympic qualification . The PJU is having a junior championships in April and a senior championships in May.

The USJA can apply to send a team to the Panamerican Junior Champonships, scheduled for the end of April in Santo Domingo, Dominican Republic. 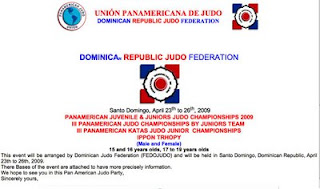 There is also a senior Panamerican Judo Championships, including kata, in Panama in May.

We can also apply to be a member of the Panamerican Judo Union, since there is no one representing the U.S. at present.

Here is the question: Is this something you want to support?
This is usually a self-funded event, and would continue to be under the USJA, which means it would cost our organization nothing and give our players an opportunity to compete internationally.

Personally, I have zero interest in being involved in judo at the international level. I have enough to do right here in the U.S., plus I have a child in elementary school and a full-time job that has nothing to do with judo. However, we do have 8,000 members doing judo in this country so it is very likely that there are others in the USJA who would be willing to volunteer to attend PJU meetings and handle whatever other administrative requirements exist.

The USJA Board of Directors passed a motion a while back that the president cannot take any action that would fundamentally alter the organization without getting approval from the membership. I am leaning toward applying for membership to the PJU provisionally and then including a question on the August ballot (in case you didn't know, the USJA Board of Directors is up for election in August) asking the membership if this is what they want.

So.... what are your opinions? Is it complicated or simple? What do you think we should do?

Also, as long as we are sending out a ballot in August, are there other items that you think should be on it that you think are fundamental to the organization?
Posted by Dr. AnnMaria at 6:48 AM

The Panamerican Judo Union is a member of the IJF. The Confederation is not. This sounds more like an organization for the USMAA to join.

What benefits other than additional international competition would membership in the Confederation bring to the USJA?

What costs: time, money, reputation, etc., are involved for the USJA?

Leave international competition to that other Incorporated organization. Keep the development that JA has worked so hard on.

It is the Panamerican Judo Union that currently does not have a U.S. representative, so it is the PJU that the USJA would join, not the confederation.

Costs in money would be zero. These would be self-funded events because, although I do think that the USJA should be an organization for ALL involved in judo, I personally see our main mission, as Loren said, as developing judo within the U.S.

As for time, we would need volunteers to work with the organization. I don't have a lot of time to do this, but I thought others might be interested, which is one of the reasons why I was asking about it.

I see it all as a power struggle between USJA, USJF, and USA Judo.

The board of directors should always base their decisions on whether or not it will benefit the judokas. The "political" bs that is happening is the only thing about judo that leaves a bitter taste in my mouth.

Think about it.... why doesn't USA do so well in the Olympics?

It's because we are divided as a nation. We need to "get our act together" and become one. Imagine if USJA, USJF, and USA Judo was to "merge" into one entity... how many resources and opportunities we would have for our athletes! (If you are not a USJA or USJF, or USA Judo member, you don't qualify...)

I sort of went off topic...

But I agree with Loren to some extent. We should concentrate and develop USA Judo nationally, but we do need to also focus on international competition.

But first we need to "develop internal competencies in United States Judo", as Loren has stated. Until we do so, we won't be able to effectively compete in an international arena.