How NOT to be an asshole in martial arts 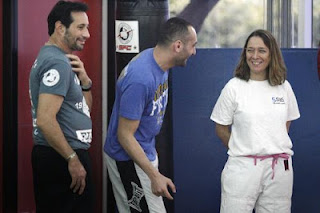 People at clinic today definitely NOT being assholes.

Photo above is from Glendale News article

The clinic Ronda did today was great. All of the people who attended were great, she did a great job and it raised over $11,000 for the Didi Hirsch Clinic to assist people with eating disorders. The funds they raised today are going into their residential crisis program, which provides inpatient treatment.

Thinking about all of the terrific people today, I was reminded of other events I have attended that were not nearly as great. Maybe it was your fault. Let's hope not, but just in case, as a public service, here are a few guidelines on how NOT to be a martial arts asshole. Feel free to print out and post in your dojo or leave taped to the gi bag of, you know, "that guy". 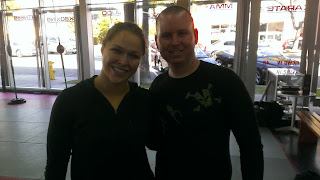 Don't be an asshole! Instead, be like this guy!

Well said AnnMaria. I've been to hundreds of clinics and camps and also coached at hundreds of clinics and camps in 48 years on the mat. I can't stand the guy who tries to impress everyone by trying to upstage, interrupt or outguess the clinician or coach. One time I heard a clinician tell someone; "We can debate the merits of this point, but my friend, you don't stand a chance."

Good advice for ANY type of instruction Dr. D. Also, how about when people TRY to end your sentences for you?!?
Thanks for the refresher in teaching moments.

Stonewall -
You're right this happens in any type of class but I see it happen more often in sports and martial arts. Not sure why.

Thanks to you and your lovely daughter Ronda for taking the time to organize and conduct this fund raiser. About two doors down from me in my office building is the office of a therapist who specializes in the treatment of eating disorders. A few times I have seen patients of hers entering or leaving her office who are obviously suffering from anorexia or a similar eating disorder. It is heartbreaking to see the condition they are in. You pray for them to recover.

This is interesting to me, I study Kenpo and Jujutsu, when I arrive early to classes the kids are usually training my coach has said to me I'm free to practice down the back and interupt if I see one of the kids doing something wrong or go through techniques with them, during the class's though if the coach is busy with a newcomer or a grade I tend to have to run through the techniques with my fellow classmates given I put in the most practice, they ask me why I do things and why I vary a little from our coachs instruction. I explain it as best I can and have never actually thought I might be sounding like an asshole. I shall try gauge the reactions I get from the coach next time I do it I don't think I'm being an asshole mind you and I accept when I've done something wrong and try to learn so maybe I'm just worrying to much. I don't think I'm that guy but really if you where would you know it or not. Anyway interesting post I know how annoying it can be when someone tries to basically take over a class especially when they are a relative new comer.

Sorry for the long comments, Love the blog.

The key phrase in here is that the "My coach has said to me ..."

I often teach with very qualified black belts who are part of the group and will ask them to please jump in and help. That's different from Joe White Belt Know it all

I always find a fun article when I stop by your blog ever few months! Hope all's well