Ever since one transgender (male to female) competitor has become publicly known a few weeks ago, there has been a lot of talk about how people who oppose transgender competitors are "hate-filled" or ignorant of science.

Many comments have stated that those opposed to transgender mixed martial arts competitors are just too bigoted to pay attention to the "huge body of scientific literature showing there is no difference between biological females and transgender females".

Everyone is entitled to their own opinion but you are not entitled to your own facts. Post-operative, post-pubertal transgender male to female adults is hardly a large population. Multiply that small percentage by the number who elect to participate in elite level sports - of any type - and you get a tinier fraction. Now, select from that tiny fraction the percentage who are in mixed martial arts and the total number of studies you come up with is - zero.

I went to PubMed - the publication database of the National Library of Medicine - and I did find a 2005 review of the literature Gender Identity and Sport: Is the playing field level?

In fact, there are no published, peer reviewed studies on the performance related sequelae of the commonly prescribed feminising hormone treatment regimens.


ONE document on a website mentioned ONE athlete who was tested and fell "well within the normal range for females". Before you get very far on this one person, let me point out the difference between peer-reviewed journals and web sites.  I can say anything I want on here. 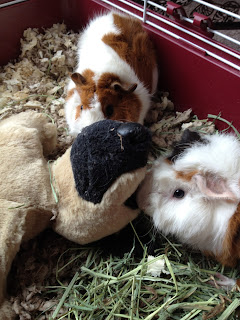 The thing is, half of that is bullshit. The part about meeting Joe Rogan and the guinea pigs having more hair is true. In fact, guinea pigs are only slightly more intelligent than a box of hair, which they somewhat resemble.

Peer-reviewed articles, on the other hand, are read by people who are experts in the field who analyze your methods, results and conclusions and turn down your paper for publication if it does not meet the criteria for adequate scientific research.

The article goes on to say

for athletes who undergo reassignment after puberty, there remains the possibility that residual testosterone induced attributes could influence performance capacity, and thus it could be logically argued that the decision to permit participation or not should be made on a sport by sport basis.


This article also mentions, as many commenting on the mixed martial arts issue have, that the International Olympic Committee policy allows for transgender athletes to compete as female if they have had gender re-assignment surgery and two years hormonal treatment. However, it also notes that NO transgender athletes have been acknowledged as competing in the Olympics.

In fact, to complicate matters further, there was one transgender athlete from the U.S. who did try out for the 2012 Olympics. This athlete was a female to male transgender person but competed in the WOMEN'S division. She planned to complete gender re-assignment surgery after the Olympics. She did not make the team for the same reasons anyone else didn't make the team - her throwing distance did not place her in the top three.

A Canadian athlete who was a male to female transgender person competed in cycling but not at the Olympics, as she did not meet the qualifying times required. She commented on an article that this was not due  to ability but rather to coping with family issues (her father was dying of cancer).

So, here is what I was able to discover in searching the scientific literature:
What I did NOT find was the supposed vast body of literature "proving" that male to female transgender athletes are identical to athletes who were born female.

I'll have more to say on statistics and data relevant to this point on my statistics blog later, but for now, speaking of statistics, I have to get some work done for a client.

UPDATE: The tiny bit of data I COULD find related to transgender male to female and mixed martial arts specifically is here. No one to date has sent me links to any other relevant studies, although a lot of people have called me names, which , I should point out, is not the same thing.
Posted by Dr. AnnMaria at 11:29 PM

Are you saying a study of 1 is not conclusive EVEN if the conclusion is politically correct? I'm pretty sure I read about a PC condition in hypothesis testing back in the day.

Hey, I can double your sample size. ;)

In Thailand, a ladyboy known under the name of Nong Thoom (Parinya Charoenphol) competed at top level in Muay Thai against male competitors.

Following sex reassignment surgery, she had a few fights with male fighters, including this one, 5 years after the sex change).

She won a few, but the level was much lower and she obviously wasn't anywhere as good as she was in her prime, 7 years earlier. Then again, the same is true for most fighters, especially those who took a few years off to pursue other activities.

Anyway, that's just for the annecdote. As you point out, even in the unlikely event one could garner a statistically significant sample, a fighter's performance is not something that can be measured and compared objectively.

My take is that athletes are not allowed to use drugs to alter their hormonal profiles, and it would be pretty dumb to let a male fighter enter a female division on account of the adverse effects of hormones.

I commented on Rosi Sextons blog regarding this same issue,something along the lines that her article was like a ray of sunshine,parting some pretty dark and cloudy skies. Keeping in line with that same train of thought I will dub your article a bridge over troubled waters. Thank You for taking the time and effort to sprinkle some rational intelligence into this chaotic topic. =)

ps. Joe could use that box of hair. ;p

There seems to be a movement now to suggest that the mental health of someone who is transgender is normal and physically healthy as well. These are statements that also appear to be opinion.

And that folks....is the perfect cure for dispelling ignorance.

Here is an irony as well: Those who claim that science is subject to politics and power dynamics...well so did Kuhn the great sociologist of science but guess what? we all have the power to research the material and draw our own conclusions. No the data does not occur in a vacuum but, the ability to look at data and find corelation and even substance allows us to look at an issue like transgender performance variables with no politically correct agenda.

From one scientific person to another, I agree. The political movement regarding LGBT rights is a noble thing, but scientifically speaking, it is a completely irrational to believe that completely transmuting (and I use that word deliberately) a male into a female is possible. Technology is this field is certainly advancing, but the fact is, Fallon Fox should not be allowed to fight females being a transgender. There's nothing "bigoted" about it. If there were enough noteworthy transgender fighters, they could have their own division, but the fact is, there aren't.

Hello! I'm the same anon from the last comment. It just occurred to me that I forgot to address the matter of peer reviewed papers. Peer reviewed papers are important, but in some cases, it's a slippery slope and not all 100% reliable nor does it have a strict definition or criteria. Some instances, such as the one with Dr. Daryl Bem are dismissible, others, not so much: http://www.scientificamerican.com/article.cfm?id=a-medical-madoff-anesthestesiologist-faked-data

I find it funny that simple-minded people would base their expertise off of one article. I too have met Joe Rogan and find he is rather intellegent and funny. My daughters hamsters died of stupidity and they weren't very funny. I think there needs to be more studies compiled before we jump to conclusions. Joe has a right to speak his mind, just like we all do! If they are allowed to compete, it should be on a level playing field.After all we all want to be FAIR right?

I would like to point out that it is not possible to die of stupidity. I know of two guinea pigs and many, many people who are (literally) living proof of this fact.

I would have to disagree with the extent of Joe Rogan's intelligence you're claiming. He's one of those types that yes, he's an advanced thinker, but he lives in his own head and that blocks him from being able to see things as they are. He cannot distinguish between what he sees and what his minds adds to or filters what he's seeing. He's not as thoroughly researched in particular matters as he claims and often likes to convince himself that he's "the smart one". Take a look at his critique of Kung Fu and Krav Maga. He doesn't seem to know anything about the genuine form of the styles he criticizes, often confusing them with the "McDojos" which purport to teach such styles. There's a huge difference.

It's not possible to die of stupidity, but I wish it were. Sadly, this world is designed to support stupid people at the expense of the smart humans. The smart people, regardless of what our society teaches us, are akin to big fish living in Piranha infested waters.

Fallon Fox should be allowed to fight anyone who consents to fighting her knowing her history. If a woman feels fighting a MtF trans opponent is an unfair risk, she can turn it down, but if she feels it's a challenge she can face, that's all that really matters. In this case, it's not a sport by sport basis but a fight by fight basis.

While allowing competition on a fight by fight basis sounds reasonable on the face of it, after giving it some thought, I'm not so sure. We don't allow individuals to decide on any other rules. At least in judo, I can't fight in the 78 kg division even if I wanted to because I weigh less than 70.1 kg. You could argue that is the way it USED TO be done. You're correct. I'm a product of those days and six knee operations later, I think I would have been much wiser to have kept closer to my own weight division. You could argue that I trained with men and you would be right, that's what happened to my ACL, MCL and most of my cartilage, when I was thrown in practice by a much larger male. It was a complete accident. That is the sort of issue people are worried about. No matter how much Ms. Fox wants to fight, it is legitimate for us to bring up these issues. Just throwing a little tantrum and saying it's my right and everyone who disagrees is a coward or a hater is a bit disingenuous in my view.

Kung fu does not exist as a martial art. It is a generic term for Chinese martial arts so the odds are high that a place naming itself kung fu is a bit of a mcdojo. I'd take the judoka over the kung fu guy any day regardless.

Stupidity is often subjective; this sounds a bit too nazi for my tastes.