Think out of the guard

One point we made in Winning on the Ground was that you had to be able to attack from multiple positions. Recently, I was visiting a very reputable jiu-jitsu school and, as I try to do wherever I visit, I sat and watched practice for a while. I noticed that 90% of the time was spent in one position - the guard - that is, with one player on his or her back and the other in front or trying to get on top. I see this at most jiu-jitsu practices, no matter where I go.

Asking about this, I was told that people believe it to be a more defensible position and that there are more opportunities to attack from that position.

Maybe that's true and maybe it isn't - that's irrelevant. It is bad practice to concentrate exclusively on attacking and defending from one position. The reason so many people get away with it is that they train with other people who do the same thing.

Once one person breaks out of that mold and gets expert on working from other positions, our "guard specialists" are going to have a hard time. What are you going to do if all of your attacks are from the guard and your opponent refuses to engage with you in that position? They're not required to, you know. What if all of your defense is from the guard and your opponent inconsiderately decides to attack you from a different position?

In such cases, I see the person switch into the guard as soon as possible, but that is really inefficient. It's almost as silly as getting up and getting on the opposite side of your opponent because you only have attacks from the right side and you happen to be on his left.

I have had people tell me more than once that it is bad practice to ever give up your back, let someone get their hooks in, and a long list of other principles that I forget and it doesn't matter anyway because they're mostly bullshit.

What *I* think is bad practice is to give up a wide range of situations in which you have a potential to win. There are few absolutes in life and even fewer in fighting.

My suggestions:
Of course the same problem of focusing on a single position exists if you only attack when your opponent is in the turtle position, like too many judo players who ONLY attempt sankaku, or in any other single position. It limits you. Stop it. Think outside the guard. 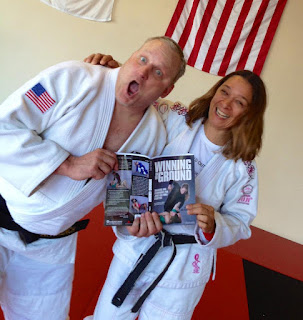 Click here for Amazon
Click here for Black Belt (can get paperback, Kindle, nook & more)
And on Barnes and Noble.com for the Nook


whats that sound? "Mooooorrrrrg" The slaughter of another sacred cow. Ann Marie you are as usual spot on. The funny thing is that like so many things in life, people do things blindly, with nary a question much less a peep...At one time there was in fact a very good reason to practice the Mount and Guard.

These positions allowed the Gracie family to limit the potential outcomes in a faux combat scenerio. In other words, to take various opponents and bring them into a limited scenerio where the Gracie participant could expertly work from to apply technique. This worked great because it put the opponent into a position where he/she was never as knowledgable as the Gracie fighter...think of it as a chess strategy to limit the infinite to a set of postitions mastered when applied.

Problem is that even the Gracie stylists were taught, developed other techniques before specializing in the ring. And today people are familiar with this position so it is not the advantage it once was. This position has always been a specialized strategy that worked in one hopological context: the pit fighting of Brazil.

The effect is that people stilt their creativity, options and training by using these positions as a crutch. One should never rely on "tricks" before learning technique. Unfortunately a lot of matwork has become a set of tricks instead of skill building.

Let people learn to work out of a naked choke and other such situations....thats what trianing if for.... I am reminded of this story. The name ecapes me, but an author wrote about his friend putting him in a position that was "unescapable" Well he escaped and wound up apologizing to his friend saying, "sorry if you had told me it was unescapable I wold have known I couldn't do that!"

Moral of the story....lose matches in the dojo and learn...struggle against positions that are allegedly unescapable...etc. Playing it safe in training makes a person in capable of taking risks.

Hello ,
I have read your all post on your blog,according to me this is one of best refrence to judo mats sites in web. I hope you will post more best articles in future.
You can also read my articles posting related to judo mats
http://www.fitnessmatsindia.com/

I'm a Gracie/Brazilian jiu-jitsu practitioner and completely agree with you. On the bright side, I find more and more schools are implementing positional sparring (starting in a specific position and going from there) so that students become comfortable in all positions.