About 14 years ago, Dave Winer wrote a blog post "Transcendental Money", about how much money you really need. It's brilliant and I'll probably write about that on my other blog soon.

Today, though, my point relates to a term I heard for the first time in his post,


By that, he meant that if you have money, even if you do nothing it accrues interest, so you have more money. If you think you need $3 million to live on for the rest of your life and you are 50 years old, spending $100,000 a year, you could worry you'll live more than another 30 years, but that ignores the fact that you're earning interest on that money every year. This is the reason I've encouraged all of my daughters to start a retirement account as soon as they started working. They'll have all of those years of money becoming more money. Sure, you can start a retirement account at 40, but you'll have missed out on 20 years of compounded interest.

The same is true of effort, as I was trying to explain to my lovely youngest daughter this weekend. Yes, you can go back to college at 40, just like you can start saving for your retirement then. However, if you put in the effort earlier, you will have all of those years of paying dividends. Let me give you several examples:

I graduated from college at age 19, then went on to get an MBA at 21. I was not the most mature 21-year-old, but having a couple of degrees from well-known schools enabled me to get a job as an industrial engineer. Because I was working in a large corporation in the defense industry, I was surrounded by technology, both hardware and software, and had the chance to learn about programming and its applications. At each step, I gathered more knowledge - of languages, project management, different industries.

Because of that, I seldom apply for anything these days. Whether it is to present at a conference, teach at a university, work as a consultant or for a full-time job, people contact me based on the effort I put out in the past. They talked to a former student or client, read one of my company blogs or a paper I had published. I get opportunities now because of effort I put out in the past.

The same is true of judo. I wrote a book on judo that was published a year ago, but people still read it. Most of the time I spent coaching my daughter, Ronda, I put in during the years from 11 to 16 - over 10 years ago. If I go somewhere to teach judo, people have heard of me because of the work I did then.

This is not to say that I'm resting on my laurels. If I have to teach a class, I put a great deal of effort into, whether it is statistics or judo. If I'm giving the keynote address at a conference, I spend a lot of time researching it and practicing it.

First, I don't have to put out any effort to get opportunities.  Quite the opposite. I'm more likely to have a friend call up and say, "We put you as our keynote speaker," or "I need you to write a chapter for this book" or "How about doing a judo clinic on this day?"

Second, although it is true, as Shane Welcher said on twitter,  "Yesterday's home runs don't win tomorrow's games" it is also true that all that batting practice you did yesterday is going to help you out tomorrow. It's more than that, though. The fact that you are the best batter/ goalie/ statistical programmer or whatever is going to give you opportunities to play more, get your hands on the latest equipment or whatever. That, in turn, will make you even better.

I learn more about judo because I have the opportunity to be around people with a lot of knowledge. Because I understand about transition, combinations, techniques that were formerly allowed but aren't used any more, etc. etc. when those people tell me something, I can relate it to what I already know.

The same is true whether I'm writing a program or a lecture on population attributable risk - I can take code or lectures I wrote in the past and re-use that, making a better product with less effort.

Moral of the story: Work now so you can work less later.

I'm not sure she really took it to heart. I think she fell asleep. 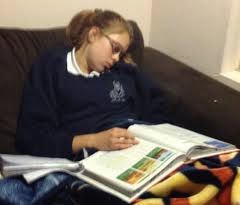 Essentially, what you are saying is that fame has a residual component. You became famous for being the first American female world champion. The fame you acquire by doing an exemplary (top 1/10 of 1%) job in any field of endeavor will accompany you into your later years.
You have become the 'go to' guy or gal, so to speak.
With respect to the sport of Judo, you were the 'effort' and Ronda is the 'sweat'.
Your initial efforts, in that regard, have paid major dividends.

So what? You introduce the most basis concept of time value of money (future value of a lump sum amount). Most high school students understand this basic concept.

Anonymous:
So what...
Mrs. DeMars is explaining the concept to her daughter, a young high school student!
That's what!

Anonymous must hang around with really smart high school students. I find most DON'T understand this basic concept.

Are you that unlearned? AnnMaria post consist of many vain boastings. Although it might be the case this time. To a simple minded fellow like you this is a big deal. That's what!!!!!

Ya know, Mr. I am to afraid to say my name, there are many other sites filled with 'Rousey haters' out there in cyber world. I am sure you would feel more at home there.
And.....there is a new invention called a dictionary where you can learn the difference between 'confidence' and 'vanity'.

20 years of compound interest, brilliant! and what have interest rates been the last 5 or 6 years? 0.5%?

if you were referring to returns on stocks, that's obviously not interest.

All young people should be so lucky as to have these ideas clearly explained to them.. along with a reminder here or there.

Dr. AnnaMaria, thank you for all of your wonderful blogs.