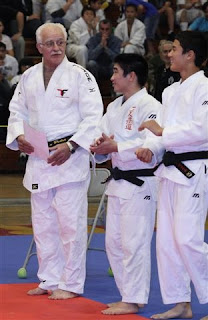 The post below is copied verbatim from Jimmy Pedro, Sr.'s column in Growing Judo this month.

(Note: You might think appropriating someone else's column for your blog is a new low in laziness. Not exactly. If the March issue of Growing Judo is to get out while it is still March, I need to spend my time on that. I really liked his column this month, so I thought I would reproduce part of it here.)

I don’t think matside coaching is calling scores that aren’t there or calling stalling on opponents just to win a match. I never say anything to a referee that I don’t believe to be true. I may not always be right, but I believe I am at the time.

Having said that, you need to be a student of the sport so what you are saying matside can help your players. Know the rules, know tactics, really study judo matches at tournaments, on DVDs. Take every opportunity to learn how and why people win contests so that when you are in the coach’s chair you can speak with authority.

The next thing to keep in mind is that you have to teach your students at every “matte” to look at you so that you can relay the information they need. The hardest thing is to program the students to do what you are telling them to do whether they agree or not with what you are saying. That comes with confidence in you. The hardest part is for them to commit 100%. The technical part is easier. Once one or two students commit to following your direction and start to win consistently, it is easier to get the rest of the students to follow.

...... read the rest of this article in the March issue of Growing Judo which, I promise, will be out while it is still March.
Posted by Dr. AnnMaria at 9:53 PM


Ronda's being interviewed by the Wall street jornal online

Her oldest sister called and said she is in this month's issue of Vogue. I will have to go buy it, even though I heard she is quoted saying that I am built like a tank.