Over twenty years ago, when my children were about ages 8, 5 and 4, I wrote a chapter called, "Handling the triple threat: How to hold a job, raise a family and still be sane by graduation" 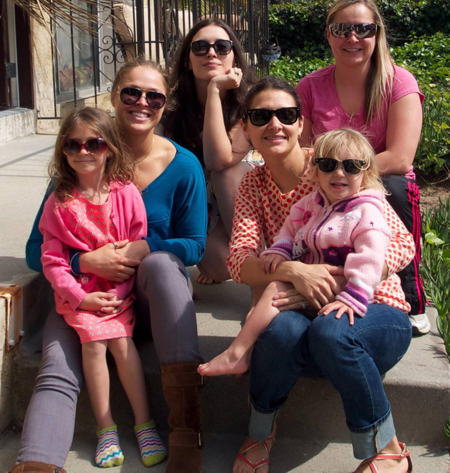 I could not find the book. My sister probably has it. She has taken it upon herself to be the family librarian and obtain a copy of everything any of us has published. She drew the line at Maria, though, because she has hundreds, maybe thousands, of articles in press.

One of my main points in the chapter was from Sandra Scarr, author of Mother Care, Other Care and much more famous for her research on black children adopted by white families. She wrote about her personal experience being an extraordinarily productive author, professor, researcher and a mother. One of her points was

Don't try to compensate by making organic, home-made baby food. Buy the kind in the store for 39 cents. Both are equally likely to end up spit up on the cat, and you can use the time you save reading your child a book and relaxing.


There is no doubt that my granddaughters are brilliant. Emilia turned two years old last month. When the surprise birthday party for her sister was breaking up, she was very sad because she did not want the party to end. Aunt Ronda explained that she had to go and work so she could make money to buy things, like a monkey. Emilia asked,

You have a monkey? Can I touch it?

So, yes, the children are brilliant and maybe that has to do with Maria devoting most of her waking hours to them. Perhaps that is supposed to make me feel guilty because I did not do that, in which case it is a failure.

One of our earliest home videos was of my using the remote control to turn the TV off to try to get two-year-old Jennifer to quit watching Inspector Gadget. I swear, that child tried her hardest to watch TV eight hours a day. I probably let her watch it two or three hours a day while I got work done.

She grew up to get a minor in film studies and major in history at San Francisco State, followed by a masters at USC and now she is the kind of history teacher you hope your child will have.

When my children were young, their father was ill and I suddenly had to make both incomes for our two-income family. After teaching at the university all day, I would come home and work as a consultant. I told all of them,

Unless there is blood on the floor, don't any of you talk to me after 10 p.m.

My desk was downstairs and their bedrooms upstairs. I chased them back upstairs many a time and I felt zero guilt.
They turned out fine.
Posted by Dr. AnnMaria at 3:31 AM

Mrs. DeMars
You adapted. Life is a scrap for most people. Just like young Rousey when in a fight. She adapts to any look. She conquers.
You adapted, and given the cards you were dealt, you conquered.
Because the end result is that all looks well in the Burns/Ortiz-Rousey-DeMars clan from my vantage point.
I thoroughly enjoy following you guys and reading your life's lessons, Mrs. DeMars.
All i have to do now is save my pay per view money and make it to one of your daughter's fights before she hangs up the gloves.
Keep the good stuff coming....I can't get enough!

One more thing on that note...
Your daughters were very young when their father passed. Ronda was 8?? Most parents are all knowing superheroes to kids that young. And then, in an effort to establish their own individuality, the young ones rebel and end up hating one or both of their parents for no good reason other than they've lost their superhero powers.
When wisdom takes hold, they come to their senses and realize that their parents are just imperfect human beings like everyone else...
And that doesn't happen overnight...sometimes it takes decades to come to that realization...to acquire true wisdom.