Even the out-takes from the book came out well! Last week at Gene Lebell's surprise 80th birthday party we had the luck of having award-winning photographer Hans Gutknecht on the premises. 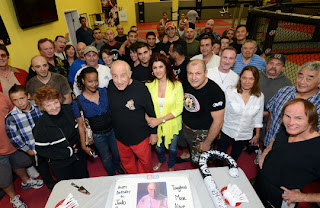 We were re-taking shots for a couple of techniques in our book, Winning on the Ground, and Hans very kindly offered to take them for us. He was extremely polite not to add,

"Because it's obvious YOU people aren't professionals!"


He got some amazing photos including some we ended up not using for the book.  What happened was Ronda and Manny started out doing the techniques we needed and then one of them would say,

"How about this one? This is a good move."


When I went through everything when Hans sent me the photos, I saw that Jim already had included some of the techniques in the pictures. We're thinking of writing this up as an article though, because it came out so well.

Here is the beginning - your opponent reaches over you and grabs your lapels. There are a number of judo moves the person on top can do from here. 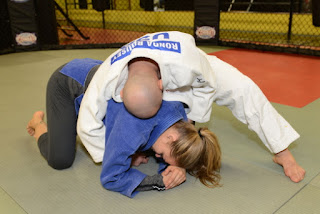 Assuming he is smart, like Manny, his weight is distributed more on the side of your body that is closest to him, making it difficult for you to lock above his elbow and do a wrestler's roll.

You might even want to fake as if you were going to roll him to fool him into thinking you are going to go in one direction - and then, instead ... 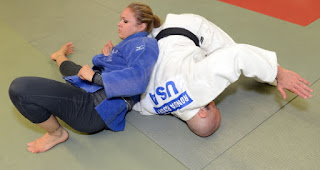 You sit out towards his hips, putting all of your body weight on his elbow. In judo, this technique is called waki gatame . I think I spelled that right. I'm sure someone will tell me if I did not.

Ronda likes to grab her own gi, to keep the person's arm held tight to her. Also, it leaves her other arm free, making it easier to turn into a pin if he manages to do a forward roll to escape from the arm bar. Personally, I like to grab my opponent's wrist with that hand. One way gives you a tighter arm bar but the other makes it easier to switch into a combination. Suit yourself.
Posted by Dr. AnnMaria at 1:16 AM

I have to say, I love your judo blog. (Yes I cannot wait to get your new book when Black belt does start selling it.) That said, could you spend some time explaining how you control the uki's elbow (especially from closed guard bottom) so that you complete the armbar. I find that experienced grapplers simply push the elbow to the outside of your hip and can trap your hips easily. Pulling uki's elbow towards the center of your body is near impossible even with two hands on one. Leverage seems to be on the side of uki pulling is elbow back and outside.

One way to get the arm bar is to transition into it AS you are throwing. A second key point is to have minimum space between yourself and the opponent. I always tell students that they should be sitting on their opponent' s shoulder and have the wrist trapped against their own chest. Then, all you need to do is arch and it's over. The final point is, when you hit it - hit it! By that I mean when you go for the arm bar you should be going all out. The second you feel yourself near the right position, you throw your body where it needs to be, lock the arm to you and arch.