Why I have matburn behind my ears

Yes, I do literally have matburn behind my ears. 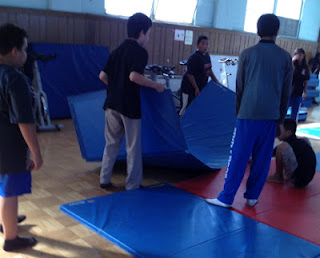 These kids are the reason why.

Years ago, when I was at Venice Dojo and much younger and in better shape, I noticed that a lot of the kids were nervous doing matwork with me. To make it more even, I decided that anyone who was smaller, when I did matwork with them, I would literally do it "no hands". This meant that I ended up locking a kid's arm under mine when he or she reached over, and rolling, or using my body weight to pin someone, without a grip, or getting in the position where I could put my head on someone's chest and use my head to hold my partner down.

An innovative meaning of the statement, "Use your head when doing matwork".

Using my head, instead of my hands, I ended up pinning several people today, and also, I noted from how much it was stinging when I took a shower when I got home, I ended up with matburn behind both of my ears.


As you can see in the photo at the top, these are some really good kids. As soon as the doors are open, everyone pitches in to help put down the mats. A couple of our mats disappeared over the summer. You might think that would be the last we would see of them.  As the teacher explained to the kids,


"These mats are very important to us."


Somehow, the mats re-appeared. We continue to get a lot of support from the school, with snacks after practice and opening the gym to accommodate us. The pile of trash in the corner is getting larger, though, because the school only has two janitors and cleaning up areas the kids are in during school time (as opposed to an after-school program), is reasonably their bigger priority. One of the janitors volunteered to work on getting us a broom, garbage can and mop to leave in the closet with the mats so the kids could clean up the gym themselves before and after.

Today was a minimum day for the school. I questioned whether any kids would want to stay when school got out early. Mr. Gonzales assured me that they would, and, in fact, he was correct. Every student was there today, as well as a few spectators.

We are doing the circuits at each practice. Today was the second time, and we do it a minute longer each time. I also assigned circuits to the students as homework. It is evident they are doing them, because they are noticeably in better condition than the beginning of the school year.

If you are too lazy to click on the link, I will tell you that our circuits are 30 jumping jacks, 5 sit-ups and 5 push-ups, repeated for 3 minutes, then a one minute rest, then we do it again. Next week, it will be 4 minutes.

If you'd like to support the Gompers program, we can always use judo gis, especially the larger sizes.

If you live in California, you can also vote for Proposition 30. And yes, Prop 30 will cost me money and I already pay a pile of taxes AND I own a small business. The public schools desperately need the money, plain and simple. I can tell you that there is NOT a lot of waste there. Did you just not read that there are only two janitors for thousands of kids? Hell, I can't clean up after four!

So, I will vote for it and next year I will pay even more taxes and probably have matburn behind my ears again. I'm okay with that.

Not a Californian, but I'd be really hesitant to support Pop 30. It relies too much on personal income taxes.

Here in TN, we do not have a personal income tax. We have a sales tax. Everyone pays their fair share (including the illegal immigrant / undocumented worker). We have not had a budget shortfall since we cleaned up our socialized healthcare "Tenncare" ten years ago.

I agree with you, and many other people who say that California has a flawed tax policy. Unfortunately, our schools are in a triage situation where they don't have enough textbooks, janitors or anything else. Yes, Prop 30 is a stop-gap but we need to do something to give more funding to the schools. The tax code definitely needs to be fixed but the schools need money now. I agree with the LA Times which published an article saying Prop 30 is a bad idea but we need to vote for it anyway.