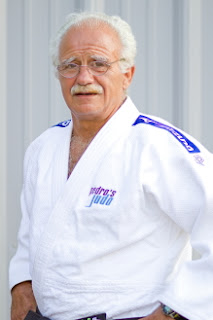 "Once a month or so, Jimmy (1999 World Judo Champion, Jimmy Pedro, Jr.) gives a clinic for an hour at the club. Usually I'm not on the mat, but this time I walked out there for some reason and a little girl pipes up and asks me to help her. I think it was sankaku (a triangle choke) they were learning. Anyway, my first reaction was to think she was doing it wrong because it looked different from all of the other kids but then I caught myself and realized, wait a minute, she was just doing it to the opposite side. That's when I got to thinking about the fact that we almost always do matwork on the opponent's strong side.

Look out on the mat and you'll see that 90% of the time, the person is arm barring their opponent's right arm. That doesn't really make sense does it? From now on, what I'm going to start having people do is to go for the weaker arm.

I kind of sort of agree with Jim. If you are going to only train one side, it probably makes more sense to do the opposite of what everyone else is doing because your opponent won't expect it. It also makes more sense to attack the weaker arm. It is also true, as I looked through just random pictures I had of me doing juji gatame that it was always the person's right arm. 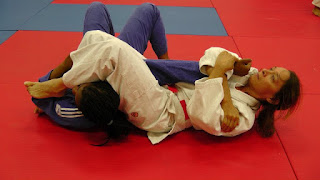 Okay, I admit, these were just the first two pictures I pulled up, but they ARE both being armbarred on the right arm. 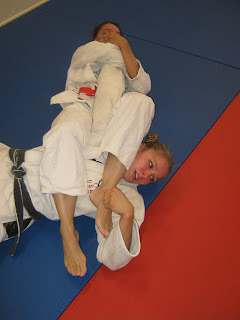 So, Jim is right but there are two reasons I don't COMPLETELY agree. The first is that I usually end up in whatever position I'm in as a transition or combination from something else my opponent did or I did. Since I am right-handed and I mostly  throw right-handed, when you hit the mat, odds are, I have hold of your right arm.

Jim is also partly correct, though. In the first photo above, I had Crystal in tate shiho gatame (a mount) and she tried to push me away with her right arm, which I had shoved across her face. That naturally led to me arm barring her right arm. In the second photo, I was doing the collect the arm move, then rolled on top into the mount again and then moved into the arm bar. In this case, though, since Ronda is left-handed, I was actually arm barring her weaker arm. Jim would argue, though, that I could just as easily have set her up in this case to arm bar her other arm, and he is correct, because when you are collecting the arm, you could do it to either side.

The one place I would disagree is that I think you should always practice BOTH sides. Ronda competed in swimming from age six until ten, then she started judo.  From the time Ronda was little, I told her,

"There are no sides in matwork. You're not standing up. It's like in swimming, no one does a left-sided backstroke. "

That probably doesn't make sense but my point was to convince her that she should be able to do matwork equally well to both sides and to practice it equally often on both sides. It's funny because I agree with Jim when he says you should pick a side and stick with it, when it comes to standing techniques. Not that you shouldn't have one or two techniques to the opposite side, but that you should have one that is predominant. For matwork, though, it just seems different, somehow.

I have to say, when I was young and could actually do all this stuff really well, when I was on the mat and everything was going right, it almost seemed like swimming in air. Let me know if that makes sense to you because it makes lots of sense to me in my brain!

I don't know where i picked up the belief, but I've had it for awhile. I'm happy to know that I'm in good company with this belief!

You probably picked the idea up from me (-:

Marcelo Garcia is a bit of an odd duck in that regard. His stance with ground work is that while you should have a technique for any given way your competitor can move, that this should generally speaking not be the same technique switched to the mirror side, because your hips will not generally speaking be in position to go for the mirror side technique when your favored side technique is shut down. So the move he'll do when your left arm is exposed is far different than what he would do if it was your right arm, simply because of where he predicts his frames being