MMA Clothes for the Homeless : People are Funny 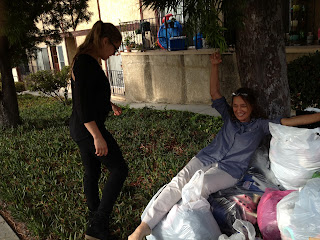 Wednesday, we packed up a bunch of clothes for the charity Jennifer Swift started, MMA Clothes for the Homeless. Ronda tweeted out a picture (that was better than mine above) about going through our closets for clothes to donate and the responses she got back were pretty funny. 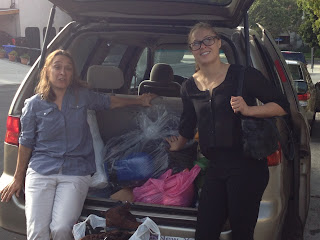 No, it is a charity that collects donations of clothes FROM people in the MMA community and donates them to homeless shelters. You can't really see it in this picture, but the back of my van is FULL. However, I have space still in the two rows of passenger seats to fill up. So .... if you are going to be at the work out at Ogden Judo on Saturday, October 13 the West Coast Judo Training Center is having a joint practice there. That means a practice hosted jointly. No actual joints are involved. I need to point that out because some of you (you know who you are) may get the wrong idea, show up and be disappointed.

Anyway ... if you come to the practice and drop your clothes off before 4 pm when I head out to Huntington Beach to drop them off, you can help fill up my van.

Also, I am doing a clinic at Venice Judo Club on October 12. I'm not giving the address because it is invitation only. I did not send out the invitations, I'm just teaching. Anyway, you can drop off clothes there also. If you did not get an invitation, don't pout. Just show up at Ogden's.

Oh, yes, Ronda also donated a signed pair of boxing gloves to auction off to raise a little cash, too. If you are interested, contact Jennifer Swift , MMA Clothes for the Homeless
Posted by Dr. AnnMaria at 2:24 AM