Another of Life's Unanswered Questions: Just Who Do You Think You Are? 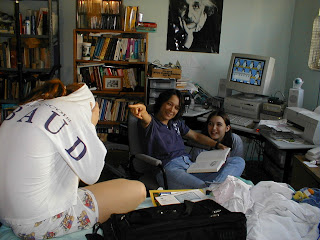 Just who do you think you are?
Why can't you be like everybody else?
Must you question everything?
Can't you ever just go along?

I've been asked some variation of those questions my whole life and the answers are No, I can't just go along, yes, I must question everything, because I am not everybody else, I am me. And, incidentally, no, I am not sorry now.

If you are like everyone else, you will be average. That's not terrible. McDonald's is average. You'll never confuse an egg McMuffin with oysters rockefeller, but you likely won't find rat poop in it, either. Average is safe. People of my generation remember the saying, "No one ever got fired for buying IBM." This was a short cut way of saying that if you did the expected thing you might not make a million dollars but it was, well, safe.

I have quoted this a hundred times in different contexts. Sitting in class one warm afternoon during graduate school at the University of Minnesota, I'll never forget the professor lecturing us,

"Always remember, ladies and gentlemen, while Burroughs had all of its engineers hard at work developing a better adding machine, Steve Wozniak was in his garage inventing the Apple computer."

What does all of this have to do with judo?

Over the years, many, many people have criticized first me and more recently my daughter for having a bad attitude or being unsportsmanlike.

What terrible things did we do? Did we use steroids, hire henchmen to hit our competitors with boards, hide brass knuckles in our judo gis?

None of the above. We didn't act like everyone else.

What puzzles me are the questions that no one else asks. Here is one:

There has been a lot of talk about how Ronda is on a different level than the other competitors in the U.S. People have even suggested that she should not compete in the senior nationals, or if she must, that she be nice about it and not embarrass her competitors by making it evident how much better she is. No one asks why Ronda is doing so much better when almost everyone in her division (and several who moved out of the division when she moved up) are older than her and have been in judo longer than her. No one asks why a player who, until five years ago had competed in exactly one senior tournament, where she placed seventh, is now head and shoulders above the competition. No one asks what Ronda did that the other players didn't do.

You might think that I am patting myself on the back here and expecting people to say, "She had a coach who knew so much judo." That's not it.

I have a pretty high self-esteem but there is no way I would say I know more judo than Yone Yonezuka, because I don't. Israel Hernandez coaches another of Ronda's competitors. I don't know him well, but I would guess he knows more about judo than I do. Doug Tono, who has coached a couple of Ronda's competitors, knew more judo than me when we were kids doing randori at Uptown Dojo - and he still does. Ron Angus knows more judo than I do now - I have seen him teach - although I am not sure he did back when we were both at Tenri Dojo. Ronda has fought a couple of his players in Canada. None of this is false modesty. It is all true. Israel, Ron and Yone particularly chose to focus on judo most of their lives while I spent a lot of time learning statistics, programming and how to make things work across operating systems. It's no surprise they learned the stuff they studied and I learned the stuff I studied.

One of those people who called and asked had an Olympic bronze medal and a world bronze medal himself. When I laughed, he demanded,
"No, seriously, how did you do that. I want to know."

I wish I had some brilliant master plan I could share where we all get bit by a radioactive spider and turn into SpiderRondaWoman. The truth is a lot more mundane.

Ronda made the hard decisions. She went to where the best training was for her and not where the most friends were, best weather or best education.

Ronda faced reality. She could not handle both college and training all out at the same time so she chose judo and got a job at Home Depot. Some people can train and compete simultaneously but Ronda knew it would not work for her.

Ronda did not make compromises. I have been to so many practices where it has been tacitly agreed that we will not train too hard, not really push each other. She trained her heart out even when it meant people didn't like her, called her mean or unfeminine or a lot worse things. She trained until she cried. She trained until other people cried.

People who go along with the crowd tend to be average and well-liked.

Other people don't go along, they cry, they fight, they are criticized, all for the chance to be something extraordinary.

We are all defined by our choices. Think about yours.
Posted by Dr. AnnMaria at 10:38 PM

What will we trade for the things we want?
What lesson about life can be better expressed than the way athletics teaches us this?

It's a fine line, and a difficult decision when you know that you're choices and sacrifices inevitably leave you with less in common than everyone else. And it's scary, going down that road.

I think that the Rousey secret isn't about Judo, it's about accountability.

When she comes home from Beijing with another medal, she will have no one to blame but herself, and those that never stopped supporting her.

I have many friends who went on to get far more education than their family members and the friends they had growing up. One said, "I go back home and everyone says that I have changed. Of course I have changed. I have attended university for ten years in three different states and earned three degrees. If that experience didn't change me, I sure wasted a lot of time and money. I have to admit, though, there are days when I miss fitting in."

I know that my education changed me, as did many of my professional experiences, but I don't mind so much because I sense that I never would have fit in any way.