The Importance of Practice Tournaments 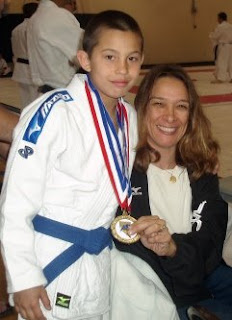 Practice tournaments and what you learn, about judo and about life

I can't count the number of trophies from the YMCA championships or Nanka Fall tournament or 47 others they have each year that have gone into the dumpster. I don't really feel bad about that, because what I brought my children to those tournaments to gain was not the purple and gold trophy, and the lessons they learned have stuck with them, and me, long after everyone has forgotten exactly who won the 13-14 lightweight divisions at the Silver State championships.
Posted by Dr. AnnMaria at 11:27 PM

I train with Ramon and Adrian here in Mesa, Az. They are incredible guys! I love reading this blog, keep it up.

Great blog AM hope all is well. Hope to see you in RI.
Will
GWJC

Adrian 40 ? Hes 50 years old. After Ramon's work outs he look's like he's pushing 70 :) !!! I also train at HeartJudo.com with Adrian and Ramon Rivera. The Dojo has been open for 1 year and the Rivera's have introduced the Phoenix area to traditional Japanese Judo. Heart Judo one of few Judo only Dojo's in Arizona. Judo is making a comeback in Arizona.

Adrian is older than me? That is great. Are you sure? Just wait until I see him again and have the chance to make fun of him about that!

My theory is that he trains so hard because he is afraid of Ramon!