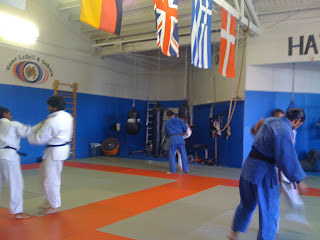 Today was a day of unanswered questions:

As my daughter, The Perfect Jennifer, reminds me on every possible occasion, I am an old woman. Either because of my elderly status or because of my new job, night at the emergency room and other distractions, I forget things.

This is another way of saying that I really screwed up this week and Kenji Osugi, Michael Fujimoto and most especially, Carlos Mendez, Ali Moghadas and the folks from Hayastan covered my ass for which I am extremely grateful.

I asked Carlos, who is an outstanding judo player, if he would mind running practice for the training center, maybe Saturday and Sunday, during the weekend of the senior nationals. I mentioned this to Kenji Osugi, the president of our local black belt association (Nanka Yudanshakai) and he said that we should also get Ali Moghadas, another relatively young black belt and terrific technician. Great ideas, right?

Here is where things started to go wrong. I thought Kenji had confirmed the dates with them and Kenji thought Ryan (Nanka development chair) had and Ryan was out of town. Thank God and Michael Fujimoto, who happened to be at practice on Saturday and mention that Ali apparently knew nothing about the practice. (Let me clarify that last sentence by saying that I am not stating that both God and Michael were at practice. Michael was for sure, though.)

Oh, did I mention that James Igne sent me a text that Sarko had not received any confirmation. So... we have announced this practice, given out flyers, but forgotten to tell our clinicians or the host dojo. Does this sound like unmitigated disaster to you? I sent a text message back to James at practice on Friday, who confirmed with Sarko that we could use the dojo. Saturday, I called both Ali and Carlos, abjectly apologized, begged forgiveness and threw myself on their good graces in asking them to show up and do a clinic with 18 hours notice. They were incredibly gracious about it.

Then, I emailed everyone I knew to remind them and called everyone who I thought might be planning to come, just to remind them again. When Ronda called in the morning, I asked her to do the same. The conversation went like this,
"I forgot just about everything about this clinic. I need your help. Call everyone you know and remind them."
"Sure, no problem. When is it?"
"At 1 pm."
"Today?"
"Yes, today."
"As in today, today?"
"Yes. At 1 pm."
"Today?"
"If you ask me seven more times, it will still be today, unless you keep asking for the next 14 hours, then it will be yesterday. Yes. Today."

And at 1 pm... drum roll please ...
Sarko was there to open the dojo. Ali and Carlos were there to teach. Players and coaches from Hayastan, Pasadena Judo, LACC, Discover, Valley Judo Institute and Sawtelle were on the mat and everything went beautifully. Carlos showed his very traditional Japanese seoi nage. Sarko showed his less traditional Russian seoi nage. Ali demonstrated two variations of tomoe nage. Gary Butts and I attempted the techniques and were mocked by various people's children.

I learned some new ways of teaching, had a chance to work on techniques instead of being the one teaching them, and got to observe our up and coming players in randori with some good partners. As I stood there watching, I marveled at how lucky I am to have so many people willing to help me out and at the slightest notice.

On top of it all, when I tried to pay Ali and Carlos for their time, both of them refused the money. There are always three people who deserve every dollar we get in the development fund, so this gives me a chance to fund another activity, an activity which I will flake on considerably less. Anyone willing to help with flyers, not forgetting to email people and general administration, please email me

The only thing that could have been better is if my daughter Julia could have come and learned some of what was taught. After having hurt her back earlier in the week, she still went to the training center on Saturday and went through all of both practices. I had told her to take the randori off, the last hour, but she said, "I think I will just go one round." In the first minute, someone landed against the side of her knee and she was crying on the mat. Last night, she needed crutches to get around. Since we have had 10 knee surgeries between me and two of my daughters, there was no shortage of crutches. By morning, she wanted to go to Malibu with her friend. Just like in Lourdes, she left on crutches and returned walking.

Sometimes I worry that Julia takes after my husband more than me when it comes to physical pursuits. Dennis believes that the point of civilization was to free us from physical labor, so by sitting on the couch watching Futurama he is demonstrating what a highly evolved being he is. Being a little kid, and the youngest, Julia can certainly milk a situation for all it is worth.

"Cough. I think I am too sick to go to practice. Maybe I better just stay home. Dad said it is okay with him if you say it is okay."
"I say get your judo gi on and get your ass in the car."

Today we had decided that she should skip gymnastics tomorrow because she had hurt both her back and her knee within a period of 72 hours.

Julia twisted this way and that, felt her back, then her knee.
"My back still hurts a little and so does my knee, but I think I could go to practice tomorrow. How about I do a front handspring in the living room and see if anything hurts more?"

I still don't know why there were swords in the living room.
Posted by Dr. AnnMaria at 11:11 PM