With just about six months under our belt, the USJA/ USJF West Coast Training Center picked up the second place team trophy in Las Vegas.

The little girl in pink is actually not a member of the training center. She is Sarah Crosby's little sister. We stuck her in to replace Anthony Igne who took off early - teach him to ditch out without watching his teammates! I am just kidding. Anthony did great - won two gold medals, and, like a true champion, came back against a first round loss to beat the same player twice and win the 13-14 division. After that, his own 11-12 year old division was easy. Crystal Butts performed awesomely, which I believe is an adjective I just made up, winning three divisions, including the lightweight women's black belt division. Not too shabby for 14 years old. Older sister Amber Butts was a lazy slacker by comparison, ONLY winning one gold medal for the heavyweight women's black belt division. Sarah brought in a first, second and third for her three divisions, topping her mom's silver medal in the women's masters.

Second place was not too bad. We only had eight players enter this weekend. It is a four-hour drive from LA, longer from San Diego, and several of our athletes had been in Wisconsin for a tournament the weekend before. We beat the third place team, which had 15 competitors, by one point, thanks to coach Tony Comfort jumping into the men's heavyweight black belt division and pulling out a silver medal - not bad for a retired guy. First place team was High Desert, which I believe entered 187 players. (Okay, well, I exaggerated a little - but more than 8!)

There were also several players who chose to represent their home club instead of the training center - and that was fine, too. The whole concept of a regional training center is new, and, as Gary Butts always says, we will learn and adapt as we go. I believe that is a saying from the Marines - Adapt and overcome. Whether the individual players and coaches decide to represent the training center or their own club at an event is their decision. What we provide is an opportunity for people to get additional training and instruction. One of the lessons I have learned in my years in both judo and business is that you can accomplish an amazing amount if you don't worry too much about who gets the credit.

Very importantly, I think everyone had a good time. Since I was strictly informed that everything that happened in Vegas was supposed to stay in Vegas I will not rat out any members of our team.

On a semi-related note, Ronda called and was a bit on the down side, even though she was very proud of our team. Ronda is a lot like Tigger, in Winnie the Pooh (her sister, Jenn, is more the Eeyore type), so for Ronda to be down is uncharacteristic. For the past year or so, judo for Ronda has been "train for this, then go home and have a good time for a week or two, train for that and then go lay on the beach at home." It dawned on her that from now until the Olympics it is pretty much an unending series of days where she trains balls to the wall. (I don't know where we got that expression we always use, because if you think about it literally, Ronda does not actually have any balls).

In an effort to help Ronda's Olympic career, Julia and I engaged in a systematic program of research this weekend. Below is a picture of Julia during our research at the Coca-Cola store which involved assessing the Float Variety Platter. 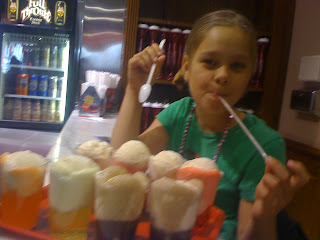 We reasoned that even Jim Pedro had to give Ronda at least a day off in Las Vegas since she fights on Friday and the trials end on Saturday. Just because we are such a good family, Julia and I sampled Las Vegas activities to create the perfect two or three days for Ronda during the trials. If you would like to assist, in the interest of supporting Olympic gold for America, of course, feel free to conduct your own research and publish the results here as suggestions. I am sorry, but I cannot promise that the IRS will allow tax deductions for your trip. Here are the conclusions from the extensive study Julia and I performed. 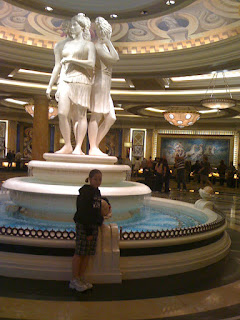 Thursday - we are going to arrive before 8 p.m. based on the hypothesis that Jim Pedro, Sr. will kill us all if we get Ronda in late at night before she fights. We decided to stay at Caesar's Palace because we figured it would be a bit more class than some of the other hotels and so she could get a good night's sleep without a lot of rowdy drunken people in the hallway. Friday morning, after weigh-ins, Cafe Lago has a terrific brunch which would be good since Ronda always likes breakfast. We thought brunch on the patio overlooking the pool would be a nice place for her to focus on the upcoming day. Julia wondered if the statues of naked people "with their parts, you know!" would distract Ronda but I assured her that it would be okay because Ronda is a professional athlete and could overlook those things.

After the Olympic trials (we are assuming Ronda will win and not have to throw herself into some fountain and drown in a fit of depression because she lost), we are going to go for margaritas at some destination to be determined (suggestions welcome!). Then, we are off to Laser Tag battles at Circus Circus with all of the people from the West Coast Training Center and Nanka we can draft to participate.

Saturday morning we are going to float in the pool at Caesar's Palace, watch part of the trials, slip over to the Coca Cola store for floats, buy things we don't need in the Forum shops and go for dinner at the Eiffel Tower restaurant. (We haven't been there but it looked cool.) Since all of Ronda's friends will have finished competing by Saturday night, I assumed that she would be off to do things of which mothers would vastly disapprove and are probably better not informed, so Julia and I are thinking of heading home on Saturday night, or maybe staying over at a different hotel. She is inclined toward the Bellagio because they have flowers on the ceiling.

As you can see, our plans can use some improvement. Please feel free to perform your own research and send us your results. After all, it is for a good cause.

========== IMPORTANT MAJOR ANNOUNCEMENT +++++++++++++++++
Eva Maria Ortiz was born April 5, 2008. I am now officially a grandmother, so show some respect, damn it! I have seen one picture so far in which she looks adorable, just like her mom. Also, if you hear any rumors that my daughter in Boston had a baby, don't freak out about our Olympic possibilities. Ronda is not the mother. She is the designated younger-sister-baby-sitter.

Yes, I have FOUR daughters. Ronda is the third one. So, all of you people who are saying, "Wow, AnnMaria is taking it really well that her daughter had a baby" can just relax now.
Posted by Dr. AnnMaria at 11:11 PM

Hello. This post is likeable, and your blog is very interesting, congratulations :-). I will add in my blogroll =). If possible gives a last there on my blog, it is about the TV de Plasma, I hope you enjoy. The address is http://tv-de-plasma.blogspot.com. A hug.