Don't Wish It Were Easier: Wish You Were Better - A nice girl's guide to winning 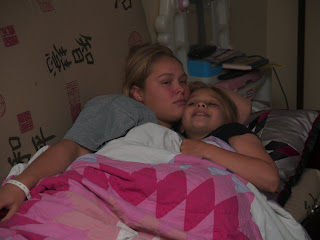 Caution: People who think they are perfect may be offended by this post

The photo above is of Ronda after her most recent knee surgery, which occurred right after the Panamerican Championships. She fought (and won) the bronze medal match with a torn cartilage, then flew straight home for surgery. Her little sister is cuddled up with her trying to make her feel better.

Today, on the Judo Forum, there were some people who posted about how Ronda was unsportsmanlike because she got up from pinning her opponent and fought some more before pinning her again, then switched pins.

Note, Ronda did not break any rules, injure her opponent, call her opponent names or make obscene gestures toward the referees. In the opinion of some, what Ronda did wrong was not win nicely enough.

It was stated that Ronda is so much better than the competition that she some how owed it to them and the spectators to "play nice", to win the match by a clean ippon, preferably a throw, I presume where she held her opponent up nicely as she landed.

Who was Ronda fighting? You might think it was her ten-year-old sister by the concern shown for her opponent. No, in fact, the young woman, who is older than Ronda, is a black belt in judo, collegiate national champion and had just beaten the number two player in the U.S. earlier in the day.

Because Ronda is so much better, some argued she should not even have competed in the nationals because it was unsportsmanlike. If she decided to compete, she should be nice about it and not use this opportunity for her own benefit trying to get extra time on the mat, "because it is the U.S. Senior National Championships."

My opinion is this --- Ronda is training to win the Olympics. I know some people are rooting for her to lose and are happy whenever she does lose a match (everyone loses sometimes). She does not act the way they think she should and they much prefer other players who dress differently, talk differently and compete differently.

The greatest woman athlete ever, in my opinion, was Babe Didriksen. At the Olympic Trials, she said,

"I came out here to beat everyone in sight and that’s just what I’m going to do."

She won the first place team award all by herself - and this was in track and field. Back then, the Babe wasn't too popular with some either, and I am sure the same people criticizing Ronda today would say the Babe was greedy and unsportsmanlike wanting to go to the Olympics in all those sports.

How did Ronda get to be good enough that people think she should take it easy at the national championships? Did she start judo at age five, go to all of the best camps, train all over Europe, live in Japan?

Actually, she started judo just five years before she made her first U.S. women's team and made a lot of sacrifices. She didn't quit after the first knee surgery. Or the second. Or the third. She went through physical therapy, lifted weights, learned new techniques, watched videos of her matches and her opponents. At age 16, she moved to Massachusetts and lived with Jim Pedro, Sr. who, although he is a really good person and great coach, as a friend of mine said, in the warm and fuzzy department, he got a half a dose of warm and a double dose of fuzzy. 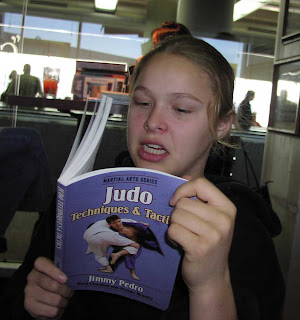 Why is it that Ronda is criticized so often. An interesting interview with Mariah Burton Nelson, the author of Embracing Victory, discusses how women are held to different standards than men when it comes to competition in sports. While it is okay for men to play to win as long as they don't break the rules, women are supposed to play nicely, not be too openly competitive, not "show off" by being obviously better than the competition.

I would like to state publicly that I am very proud of my daughter. Some players attempt to find the easiest weight division so they can qualify for the Olympic trials, fly around the country and the world to pick up points hoping for an easy draw at an easy tournament that puts them in the number one spot. They pick the place to train where they have the most friends, the best job opportunities or where they can be reassured that they really are terrific and anyone who beats them "has bad judo" or is just a big meanie.

Ronda has realized that there is no shortcut, no easy route to the top. She practices twice a day, sometimes three times a day. She is better in judo than most people because she has shown a devotion and discipline when it comes to her sport that most people do not.

Well-meaning people have advised me not to let people know that I have a Ph.D. or won a world championships, not to mention it in conversation, because it will make them angry, because they will think I am showing off.

Now people have accused my daughter of "showing off" by winning the U.S. Senior National finals and clearly dominating her opponent.

My advice to all of you: If it bothers you so much when someone has a greater accomplishment than you, you should do more instead of asking other people to pretend they have done less.

As for me, when I meet someone who has accomplished a lot more than me athletically, academically or professionally, one of only three thoughts crosses my mind.

I think people were shocked at how big the gap between Rhonda and the rest is.Maybe it was a shock to their self-esteem because it also showed the gap with the rest of the judo-world.
Don't let it bother you and don't spend to much energy on it.

I wish it was EASIER to get BETTER!
Hahahhaahha

You need to know this Dr.de Mars.F or every 10 idiots hating on Ronda,back then and now.There's a 1000 who love her.She has always been extremely competitive, is truth.But,she is kind,works harder than most and still smiles for everyone.