Four feelings I have never had: 1. Just Happy to Be Here

I'm reading a book, Devil at my Heels, by Louis Zamperini. It's a good book and he has an interesting story. He was a bit of a juvenile delinquent who became an Olympic runner and then was a prisoner of war during WW II.

When he writes about the Olympics (he placed 8th) he says how great it felt to take part, what a great experience it was. People say that the point of the Olympics, like life,is not to win but to take part. I competed for 14 years and I never felt that way for one second. Don't get me wrong, I made good friends, benefited from wonderful mentors, saw a lot of the world. However, competition wasn't necessary for any of that. I have made friends, traveled the world and had wonderful mentors as a student and in my career. I teach judo with some really good people.

However, the only point of competition for me was to train as hard as possible and learn as much as possible to beat as many people as possible as decisively as possible. I had zero interest in opening ceremonies, closing ceremonies or team uniforms (I gave 90% of mine away to people who helped me train).

Women's judo was not an Olympic sport until after I retired and I cared not at all because during most of my competitive career countries were boycotting the Olympics and I wanted to be champion of the whole world, not half of it.

My point isn't that Zamperini is wrong and I was right or vice versa. It's simply to me, it is a foreign concept - "happy to be here" paired with competition. I want my partying and vacations separate from beating people up. That's probably why I had a shorter competitive career than a lot of people I knew. Once I had reached my peak as a competitor, I was done.

It's like that slogan, "Join the army, travel to exotic locations, meet new people and kill them." I think the goals are contradictory,no?

P.S. I don't mean I have never had the experience of just happy to be alive or happy to be in a place. I have that a lot - when I'm with my family, at work, on vacation. When competing, no, it was all business.

P.P.S. In case you are wondering, the other three things I have never felt are:

2. The desire to stay home with my children full-time
3.  Competition with other parents or the need to justify myself as a mother.
4. Attracted to other women/ wanting to be a man - yes, I realize those are pretty much completely different things but I put them together under sex and gender because this is my blog, so there.

Will get to blogging about those when I get a minute but here is my synopsis.

There Isn't A Single Turning Point

Very seldom do I write or talk about my childhood, because, what's the point, really? A wise person once said ,

"There's no point in having the same thought more than once unless you enjoy having that thought."


Well, I definitely don't enjoy thinking about when I was young.

Last night, I went to a screening of American Street Kid - it's not widely available yet, but if you have a chance to go to see it - GO! A lot of what happened in the film was very familiar to me. So many of the people I hung out with when I was young are dead or in jail. 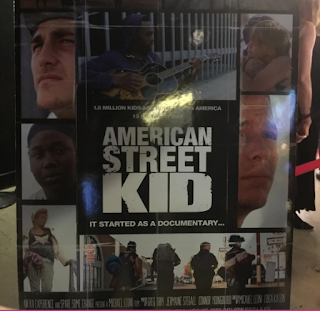 I'm still debating about the whole memoir thing. Jonathan Shaw, who wrote a couple of books about his life, including Scab Vendor: Confessions of a Tattoo Artist, was on our podcast a few weeks ago and he said,

You'll grow as a person, but it will probably hurt. And I just said 'probably' to be nice.


Maybe. It sounds like psychotherapy but just talking to yourself (insert desired sexual innuendo here). I'm the kind of psychologist that computes statistics, I can tell you what percentile your depression score falls in relative to the general population. I'm not the one to come to for treatment for depression and helping you understand about its roots on your childhood.

(People who suffer from depression, don't bother writing hateful comments. Yes, I'm sure depression is a serious illness. We already established that I am not a person with depression expertise in the previous paragraph.)

Foster homes. Juvenile hall. I don't feel I need to write out my autobiography or go talk to someone for $250 an hour so I can "understand my feelings" about my childhood.

A lot of things fucking sucked. Understood. The End.

However, Fidel Rodriguez, is very persuasive when it comes to getting people to do things to support youth, so I ended up speaking about my own youth at the Rise Up for Humanity conference, and putting some of those remarks in my last post.

One question I got asked several times was,

Judo helped. All of the people I knew who fell by the wayside seemed to have problems with self-esteem. It's hard to believe you are are a loser when you're winning all of the time, like I was.

Not getting addicted to heroin helped. Don't shake your head like that's a given. That did in some of the smartest people I knew.

I'm not saying it was all luck. I worked full-time, went to college and trained at judo enough to win the national championships - for years on end. I was naturally pretty smart and athletic. (Don't give me any bullshit for saying that - I have a Ph.D. and a world championships. I'm not dumb and uncoordinated.)

So, lately I've been talking to people who work with incarcerated youth. Originally, we started out discussing the adventure games my company makes as a way to help them catch up with their math and language skills but after a while, the subject came up, how I'm being asked to speak at these youth conferences they would have barred me from attending when I was young. What the staff members tell me is that youth in their facilities need to hear from me. I think they want the youth to hear the message

Work hard. Don't get addicted to drugs. Get an education.


I think, though, it is just as important to talk to the staff and tell them:

There is no turning point. There is no time when you can give up on a kid as they are destined to be an asshole loser.


I helpfully diagrammed my own path for you. 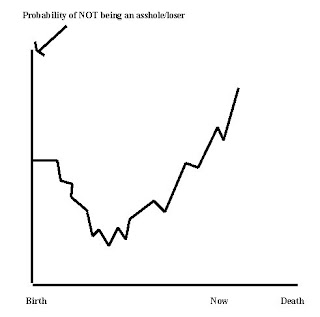 Born, I had the same odds of NOT being an asshole/ loser as anyone else. Right about the time I came into contact with you, those odds had plummeted. It looked like I was doing better for a while, then worse. Eventually, one good thing piled on another, and although there have been ups and downs, I'd say my odds are better than even now.

My message is that because you don't know when or what thing will make the difference, you have to keep trying different things all of the time. I know there are some programs that emphasize poetry and art, which is fine for some kids. Personally, I hate poetry, I suck at art but excelled at math and beating people up. Maybe you should get that kid who keeps running away to go out for the soccer or track team.

Still not sure on the memoir thing, but I'm thinking if  I really am going to be going out to speak to kids and staff, I may as well start writing it down.