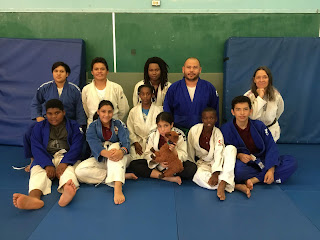 How Judo Taught Me to Avoid Startup Burnout

One thing I gained from judo was the importance of persistence. There are no doubt a lot of people who have better technique than me. They had better instructors who came from famous clubs, maybe even the Kodokan. I started at the Alton YMCA.

There are probably lots of people who have more natural athletic talent than me. I was never particularly fast. I'm also very near-sighted, so I couldn't see the scoreboard or time clock for most of the years I was competing, until I finally got contacts. I injured my knee really badly when I was a teenager and couldn't do any technique that required putting all my weight on my right leg.

Despite many disadvantages, I won anyway, over and over.

What I did learn was to be persevere.


(This might be why Forgotten Trail is my favorite game, because we dropped a lesson on perseverance in there.)

How did learning perseverance help me run a startup?

Face facts, winning a world championships is one hard slog. In my day, you had to win the state championships to qualify for nationals. After that, you had to be good enough to make it into at least the top five to get points toward the national team. There were several tournaments each year that earned points toward the world or Panamerican team. When the trials came around, the top 8 people were invited to compete.

So, there were a lot of times each year I had to be ready to win. After the World Trials, of course, there were still tournaments in Europe and then the world championships. There isn't a lot of time to just relax and decompress because each time after I'd win the next tournament was going to be at an even higher level of competition.

Running a startup is kind of like that. First, you need to make a prototype, which maybe you can do by yourself or with your one or two co-founders. Then, you need to get some customers. To scale, you probably need to bring in employees and the amount of money you require increases. You need to go out and get your first investors.

Our company is over five years old now. We've survived where many startups have run out of money, failed to gain customers, couldn't build the desired features. At each step, it gets harder. Now we have more products that need updates, to put on more devices. We have customers who have questions. More employees means we need more sales, more investor funds.

So, that is one place that judo helped. I have learned that success isn't just a matter of working hard but working hard over a very long period of time.

Many competitors I knew worked just as hard as me, or even harder, at a single practice or a single training camp, but the next time or the next month or year, they weren't there.

Sometimes, I was just tired of fighting the same people over and over. I worked full time as an engineer in San Diego so I didn't often have the option of traveling all over for training. Manny Gamburyan described it well when he was talking about doing judo with Karo Parisyan,

"I've fought him so many times, it's like fighting myself."

My usual day was to come in, do 25 or 50 throws on the crash pad, a few rounds of matwork, randori (sparring), and finish off with newaza uchikomi (matwork drills). There would be days when I just was not feeling it. Maybe it had been a long week at work. Maybe I was sore or mentally tired.

Instead of not going to practice, I would mix it up. I might just come in and do 500 throws that day. Maybe I'd do all matwork.

That's what I'm doing at this very minute. It's been a pretty exhausting month, flying to conferences, talking to people about our educational software.

Hey! Don't tune out just because I said educational software. It is completely awesome and some of it is even completely bilingual. You can learn math, history and even a second language all at the same time. Don't be such a wimp. Check it out!

So, I'm writing a blog post and while I'm at it telling you to get our games.

I knew someone who lost at a major tournament and, crying, turned to me and said she could not have trained any harder.  She was working out 6-8 hours a day. She worked at a health club and said she taught aerobics classes, ran on the treadmill 45 minutes every day, did at least a half-hour a day of weightlifting, taught spin cycling classes.

I tried pointing out that none of that was judo and she responded, "But I work SO HARD!"

I realize that writing a post like this probably won't get more than a few if you to check out our games, any more than just doing throws on the crash pad is an effective way to train for competition. Still, it is something and it helps.

I also realize that some things, like those endless tech meetups I'm invited to where people pitch their idea for electric underwear or something equally useless are a complete waste of my time, because I'm past that point, just like the woman doing the cycling classes was past the point of those being useful for her. That's a post for another day, though and now that I am less burned out, I'm going to go back to answering those emails.

Did I mention that Maria and I wrote a parenting book? You can get it here for only $1.99