Even less exciting than it sounds, but with some good bits 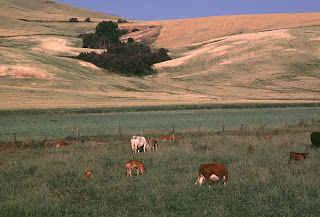 The hotel I stayed at last night did not have room service but it DID have separate fish and game cleaning rooms out back. That about sums it up. For those of you unclear as to why one would need a fish and game cleaning room,let me just explain that if you catch a large quantity of fish or shoot a deer and then you skin it or fillet it in the room, this leaves a less than desirable odor and traces of blood and guts for the subsequent occupants. Those of you who have complained about occupying a "non-smoking room" following a smoker have nothing to talk about compared to this. So, be grateful for conveniences like the fish and game cleaning room located behind the hotel.

In a few short minutes, the plane will be boarding and I will be leaving North Dakota for the last time after 17 years of living and working out here. Erich went with me to Jamestown earlier this week to visit Ron's grave. Maybe I will write about that some other time, and maybe not. I am not sure it was important to do to have closure. I guess at some level deep down I really did want to go, because I brought it up when I was talking to Erich. To the Sioux, spirituality and customs surrounding death are a part of life. One of the things I like about Erich is that he is a genuine person. I always have to laugh at those people I meet in LA or at conferences who tell me they 'just found out' that their grandmother was a Cherokee princess and then have all this new-found "Native American knowledge" that some how they claim as part of their roots. As a woman I met at the Turtle Mountain Reservation said to me this week,
"I am not so concerned about my grandchildren's tribal enrollment. I am concerned that they are Indian in their hearts."

I would say, of all of the people I have ever met, Erich is one of the most Indian in his heart, which is why I knew the second I mentioned to him that I had never visited my husband's grave and I was thinking about it that we would be going to the cemetery the next day.

So, that is over. In a way, it feels like one more loose end tied up and now I am leaving North Dakota for good. There are things that make me feel humbled as I look back.

On Thursday and Friday, Willie Davis and I did a workshop on Young Children and Disability There were 47 people who attended over the two days; 42 of them attended for both days. There were young, expectant mothers there with the baby's father and a couple of new mothers as well. On my way out, I passed a gentleman from the college who said with some amusement,

"I was outside having a cigarette and I overheard a lot of these young guys talking. Everyone of them jerked a finger towards his girlfriend and said, SHE made me come, but you know what, it wasn't bad."

More than the fact that people who had no interest in coming find the workshop to be useful, what made me feel best was the fact that not only did these young mothers-to-be care enough about being a good mother that they spent two days at a workshop, but they cared enough to insist the baby's father come with them. During the two days, I noticed a few times when I would talk about newborns or using toys to teach and the young couples would lean over and whisper to one another. They took turns printing out pages on everything from what to expect in the first six weeks to teaching language.

I hope we helped them some. These young women have my respect. They are starting families at a young age, with little money, not a lot of education and sometimes without a father in the picture. Yet, they all made the effort to come to the college and be actively involved in class six hours a day just so they could learn how to better care for their baby. That in itself is enough to give you hope for their babies' future.
Posted by Dr. AnnMaria at 1:39 PM

Their babies future will be better because of you.