I Resolve to Stay the Same

"I have better friends than I deserve."

When I said this a few years ago to my wonderful friend, Dr. Jake Flores, his son, Jacob, Jr. remarked seriously,

"I don't think that's possible. I think everybody gets exactly the friends that they deserve."

I do understand Jacob's logic, and I hope it's true, that if you are an honest, loyal person, you get honest, loyal intelligent friends. On the off chance that he is correct, my New Year's resolution is to stay the same. As with most things I have done in my life, I am sure this decision and statement will gratify some and infuriate others. As usual, it will take me a while to get over it - oh wait, no, I forgot, it won't.

What I know for a fact as the year winds to a close is that I am incredibly blessed. This Christmas, as for most of the past twenty-some years, my house wasn't cleaned up but it was full of my children. I rather suspect that a clean house and several children are two incompatible forces in life. I'm okay with that. 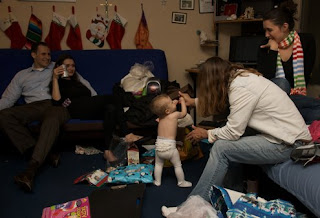 I am back to work after a brief foray into retirement at the beginning of this year. That ended with me teaching a course at Loyola Marymount University, accepting a full-time position as senior statistical consultant at the University of Southern California and continuing as a technical consultant to Spirit Lake Consulting. This is good because I get paid. Just in case, though, I am trying to practice for retirement by occasionally going on vacation. All of us, except for Ronda, went to Palm Springs for three days just to see what it would be like not to work. 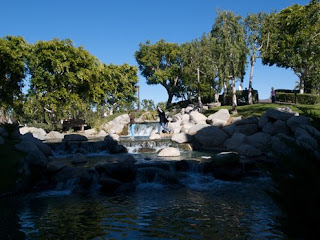 We all did very unproductive things like jumping from rock to rock to cross streams (no one fell in), riding horses in the canyons, laying by the pool in the sun and drinking white Russians and martinis. I am sure in the photo above that Julia and I are violating some resort regulation. I am equally sure that my husband takes all of these photos for evidence should it ever be needed in a custody dispute.

"Your honor, I told her that a fifty-year-old grandmother should not be jumping from rock to rock across a running stream with a ten-year-old, but she refused to listen to me."

Hah! Maturity is greatly over-rated. I have no intention of increasing my maturity rating in 2009.

After three days of this, we all concluded that the ideal duration for retirement is probably about three days. We were all ready to go back home and dive back into work. Having work you want to do is a pretty significant blessing. So is making a living wage (and a bit more) so you can buy bread (and white Russians) for your family. (And even after several white Russians the night before, does The Perfect Jennifer still look amazing or what?) 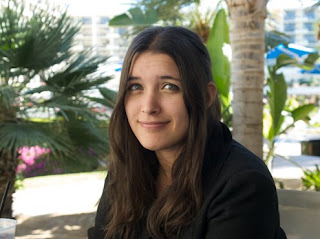 Yes, I am probably going to hell for not chastising my children more about legally drinking. That is rather hard to do considering that I am sitting here with a glass of champagne toasting the new year with my husband. If you ask my daughters, they will all tell you that I do preach to them regularly on not drinking too much and on a hundred other subjects as well. I don't intend to change that, either.

Speaking of hell and unrepentant, the new member of the family, Eva Maria, was baptized this week. Ronda was the godmother. 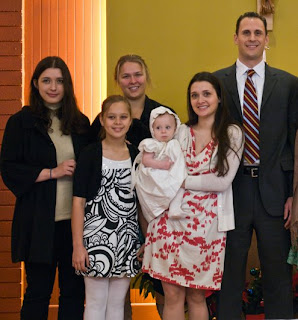 While among many of my friends, religion is considered somewhat lower-class, passe or just not 'what we do', I remain unapologetically Catholic. I don't intend to change on this score, either. Yes, the church leadership needs to be a lot more open-minded, pay a whole lot less attention to people's sex lives and move into the nineteenth century in its attitudes toward women. On the other hand, few institutions in the history of the world have been responsible for as much education, charity and culture as the Catholic church. That whole "feed the hungry, instruct the ignorant, visit the sick", yes, I really believe in that. I don't do so well on the "forgive offenses willingly" or "bear wrongs patiently". Yes, I know the latter are also part of the works of mercy encouraged by the church, but the truth is that my gut instinct is to meet wrongs with a whack upside the head, and it is probably the California penal code rather than the the Catholic teachings that prevents me from doing so. I doubt I'll change much on that score this year, either.

Oh, and there is judo. By the most random winding of coincidences I ended the year as the first female ever to become president of the United States Judo Association (or any national judo organization in the U.S., for that matter). I have noticed that some (about 98% of them male) have been incensed by this development. Some have been pleased, others amused and the vast majority disinterested because even those who practice judo have actual lives in which who is holding what office in which judo organization is about as significant as the name of the chief clerk in the Sacramento office of the Department of Motor Vehicles.

I have decided not to quit judo this year. In part this decision is based on inertia. After 38 years, I am used to it. More than that, though, it is based on my conclusion that judo, like my children, really is more worth than it is trouble. Thinking about why, a few very recent memories came to mind.

The voicemail from the ten-year-old boy from the training center who took himself away from his presents on Christmas morning just to call and wish me a Merry Christmas.

Looking through the photos from the USJA/ USJF Winter Nationals and seeing Frankie Sanchez coaching. 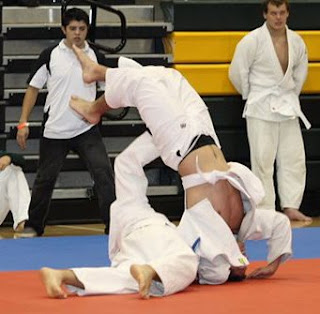 I remember when Frankie was born. After winning the world championships, I would drop by and work out at the Guerreros Judo Club on occasion, because it was near my house. Frank Sanchez, Sr. ran the club. He had probably just gotten his black belt. We were both in our twenties and just trying to, as Keith Nakasone so eloquently put it, "Share what little judo I know."

Twenty-three years later, Gary Butts and I got the idea for a West Coast Judo Training Center. By then, Frankie and Eric Sanchez were pretty much running the club their dad had started. We approached them at the USJA Junior Nationals with this crazy idea that we would raise money for mats from the USJA and USJF and maybe their dad would let us use one of his buildings for free for the next year or so to get it started. In 2008, we had our first full year at the training center and we start the 2009 practices on January 3. 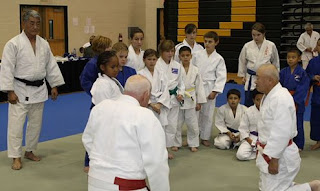 Speaking of the USJA/ USJF Winter Nationals, there was Hayward Nishioka, who I have known for more than half my life. He helped me with chokes in my twenties, and, in my fifties, I called him up and asked him to help expand and develop the USJA coaching program. He did not say any of the reasonable things to say, such as "I am a college professor with 30 years teaching experience, an eighth-degree black belt, a former world team member, coach of the world team and international referee. I am too busy and important." He said none of that. He said,

"Sure. Let's meet for lunch on Friday."

As I have told him more than once, when I grow up, I want to be Hayward.

From judo, I gained great friends who I have admired for decades. I have known my friend, Lanny Clark, since the 1983 Panamerican Games trials. His daughter, Tara, is fond of pointing out that back then her dad fought in a lighter weight division than Ronda. I am not sure whether she is teasing Ronda or Lanny. The point is, we have a whole new generation coaching judo and, as best they can, supporting and befriending one another.

I learned the discipline and work ethic that brought me academic and professional success.

Also, it keeps me from getting fat. 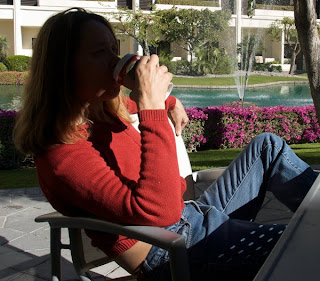 So, that is why I am in judo for another year. It has taught me lessons and brought me friends. As I looked through the pictures from the USJA/ USJF Winter Nationals, this one from the coaching clinic stood out, when Ronda drove 70 miles just to be there and help out. It's great that Ronda won a bronze medal in the Olympics this year, but that is not the reason that I do judo. The reason I do judo is that many of the people I love are in it. 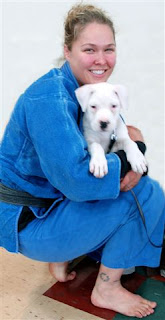