Leave my children alone, damn it! (and other people's children, too) 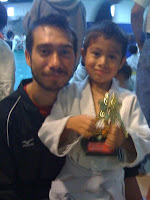 I have been really busy at work the past week getting ready for a few classes to teach next week, and leaving town for a conference, but I just could not let a few things pass without comment.

If you read the Judo Info site regularly, you might have spotted these two items on the forum. The first one was an interview with Neil Adams, a British coach, world champion and Olympic silver medalist. One of the points he made was the short-sightedness and ineffectiveness of only focusing on competition for our youthful players, say the 14 to 16-year-old group. He said it isn't necessarily good to go to a contest every weekend. I could not agree more. In the U.S., I think our competitive focus begins even younger than 14. A few years ago, after a tournament a number of children from 8 to 12 years old attended IN JAPAN, I overheard a coach wondering why we did not have much success in the senior divisions when,

"We have the best eight-year-olds in the world."

There is something wrong with that statement on so many dimensions. I don't even know where to begin. A few years ago, when my youngest daughter was SEVEN, she competed in a large tournament. She won four matches and near the end, I noticed several "high-level" coaches watching her compete. I was not at all flattered. I was extremely annoyed. The child hadn't even learned multiplication yet, for crying out loud! Maybe she'll be good some day and maybe she won't. For now, her biggest concern is if she'll get accepted to summer science camp, not the junior nationals. Her judo development involves clinics like the one on footsweeps last weekend and the one on counters and combinations the week before that, and the other clinic on counters and combinations in January. It involves going to judo practice and learning throws.

In America, we eat our seed corn when it comes to young players. We take away the greatest gift young children have and that is time. We put kids in the senior nationals at twelve, thirteen and fourteen. I agree wholeheartedly with Neil Adams. We should instead be TEACHING our children at that age. If my youngest daughter was to win a bushel of gold medals by 18 because she had a killer seoi nage and nothing else - what an enormous waste of time and knowledge available to her. Yet, I know players like that, who have won a lot on one or two moves and a lot of physical training. They may make it to the national team, and then they are done.

Let me give an example of why this happens...

I watched nameless player A make it to number one in the U.S. She always attacked with a high grip. She was strong and had a couple of good throws from that grip. The divisions in the U.S. aren't very big and she beat everyone. She competed internationally and just could not win. Why? Because anyone watching her for 30 seconds could see that the key to beating her was blocking that high grip.

Was the solution for A, then, to learn better grip-fighting so that she could always get that grip? Well no, not really. That would have helped some, but if she did, she would still only have two throws and barely any matwork. Her problem was that she didn't really know that much judo. AND she was coached by people who didn't really know that much judo, either. Prior to her competing internationally, her coach's response to any suggestions was,

"We must be doing something right, she's winning."

The solution for A is that, beginning way back at age 10 or so, she should have focused on learning more judo. Then,


Two pieces of advice,
From me: If you find your happiness really depends on whether your 8- or 10- or 12-year-old wins a judo tournament, you better check yourself. I will be very happy if the two articles I have under review get accepted for publication in scientific journals and if my book proposal gets approved. Grown-ups should have grown-up goals and kids should have goals that include getting their footsweeps to work and conning their parents into buying them an iPod touch.

"Our children are commodities to these coaches. If they get injured, burned out, pregnant, they will just find another one, but these are the only children I will ever have."

Finally, what do I say to those parents who tell me their 12- 15-year-old child wants to compete internationally in senior competition? I say,

"Tell them, 'No'. You're the parent. It is NOT good for their development and if they really do want to do it, they'll want to do it twice as much next year because nothing makes you want to do something like your parents telling you that you can't."


I said said there was a second point I wanted to make, which I did, about another topic on the forum on how one size does not fit all for training someone to be a world-class athlete, and what an 18-year-old and a 24-year-old ought to be doing right now are two very different things but it is late,and I have a day job, so I guess that will have to wait until next time.
Posted by Dr. AnnMaria at 12:07 AM

kids should have goals that include getting their footsweeps to work and conning their parents into buying them an iPod touch.

You've nailed it with my eight year old.

You nailed it on the head. I practiced and played hard during my high school and college days. Then went on to have a family and attend PA school. Now that the family is grown, and the practice is international, I'm getting back into Judo with a renewed interest. Not every 8, 12, 14 or 20 year old is going to be the next best thing. Let them be kids, let them have fun and let them learn Judo. Then, like me, eventually they will come back.