Children's competition: If you think you know, you're wrong

Last week, Ronda and I were at practice at Sawtelle Dojo discussing the upcoming state championships. I said that I had not yet sent in Julia's application because I had left it up to her if she wanted to compete and she hadn't decided. Ronda said,

"I think she should go. If you don't compete in a tournament because you are afraid you might lose, that just feeds on itself and pretty soon you area afraid to compete in anything."

I agreed with that, but I said,

"I really can't see the benefit of forcing an 11-year-old to compete in a state championships."

Thinking about this, I realized here Ronda and I are, both with gold medals from the Panamerican games, Austrian Open, Canada Cup/ Rendezvous, U.S. Open, both having competed in the finals in the world championships, and a lot more. Neither of us is 100% sure of the right answer, with 20 years and several continents of international competition between us. That's when it occurred to me.

None of us know what is right with 100% certainty. Are you putting too much pressure on your child or not holding high enough expectations? Are you letting your child give up on a shot at the Olympics or are you making sure that he/she focuses on education? If you don't force your child to go to practice several times a week is that accepting mediocrity, putting other priorities first or letting someone be a kid?

As the saying goes, everyone knows the right answers in parenting until they have children. I used to be one of those coaches who complained about children who could be "so good" but their parents had them in every activity under the sun, "mediocre in every activity rather than excellent in one", we coaches would complain, self-righteously.

Now, I have a child who goes to judo three practices a week. She only goes to one tournament a month, and I let her pick which one doesn't conflict with her friend's birthday party or going to see some new movie with Dad. She made straight A's last semester, was just re-elected to student council, accepted to the USC Science Camp for Middle School Girls, is in the Debate Club, takes piano lessons, and played on her school's basketball and volleyball teams. She could be a great athlete. What she will end up doing is anyone's guess.

I still hear coaches talking about parents who have their children in multiple activities "just so they can get into a good college" - as if that is a less valuable goal than making the junior Panamerican team.

I am writing a book on statistical software, it's on SAS Enterprise Guide for researchers, if you ae interested, which I know you are not. I mention it because I am progressing with glacial speed, although I AM getting something written every day. I read a quote,

"I hate writing, but I love having written."

Parenting is like that, although I do love everything about my children from the way they laugh to the fact that they are always thinking about what is going on in the world. Still, even years later, you're still not sure if your decisions were the right ones.

Ronda is 22. In a few weeks, she will buckle down and start training for the next Olympics, traveling all over the world and making her life happen.

Jenn is 23. In a few weeks, she will buckle down and start graduate school at USC, meeting people from all over the world and making her life happen.

Did I go wrong with one of them? Did I make a mistake? Well, I'm sure I made a lot of mistakes but I learned a few things along the way. It's like the line from that movie, Pleasantville.

No matter how many degrees or medals any of us have, we all just do the best we can, wonder if it is the right way or if we should do something else. I wear a St. Jude medal all of the time except when I am working out. My kids ask about it from time to time. It's simple, really. It's a lost cause to think we can always have the right answer or do the right thing. The best we can do is buckle down, try our hardest and pray.
------

There is, however, a right game! 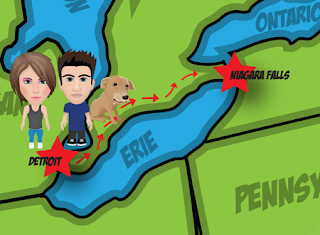 Check out Forgotten Trail - explore the country, help Angie and Sam prove they are extraordinary.

Hey, I know that feeling. I teach the under 10s judo classes and my little guy participates.

I'm hesitant to have him compete. Why? Because I fear he won't do so well, I fear he'll get upset and not enjoy himself.

But those fears are mine, not necessarily his. I can only give him the opportunity and hope that it works out.

Like life. You teach 'em, train 'em, prepare 'em - but at some stage they're on their own.

It´s just as well that kids are usually resilient enough to survive their parents!

Yes, I am constantly amazed at how well mine turned out despite me!