If a man wants to saw off parts of your leg, tell him no

Warning: If you are looking for a post to encourage people to start judo, this is probably not it.

People keep telling me that after I see how much more I can do after this surgery it will be all worth it. They are wrong. I know this because the only thing that would make it worth it would be if I develop super-powers. And I don't mean Ronda-type able to lose the Eiffel Tower in her purse and do juji gatame from a back-bend super-powers. No, I mean honest to God, leaping tall buildings with a single bound, catching speeding bullets in my teeth and flying super-powers. 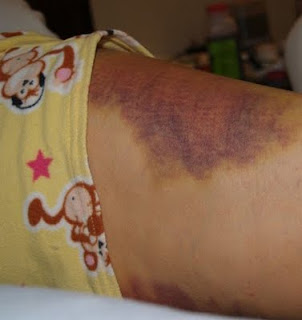 That picture above is my leg (and Julia's monkey shorts). There are just as many bruises on the bottom and the middle part in between is that nine-inch gash stapled together. Here is what happens in a nutshell. They cut open your leg, saw off the ends of two bones, the tibia and femur, and replace those with Titanium or Titanium and plastic parts. If you have a strong stomach, you can see photos here.

I was thinking that maybe I am just a wimp because I have not heard how bad this was from other people but let's just revisit this a moment. They cut open your leg and saw off the ends of your bones. There is no way in which you can frame that where the natural human response is not,
"F###! That's got to hurt."

In fact, I am pretty sure I saw devices in the Museum of Torture that had similar purposes. I used to say that having a baby was no worse than having knee surgery and once labor is over, it pretty much stops hurting and you have a baby. Where, with knee surgery, you only have a scar, no baby and it hurts for a few days. Having your knee replaced is NOTHING like having a baby. After this, I could have quadruplets in the middle of randori and it would be a piece of cake.

So, why did I do it, other than the obvious answer of stupidity? Well, my doctor said there was no choice. That it was essential was pretty obvious for two reasons. First, this surgery has a much higher risk of failure for people under 50. I turned 51 in August and was on the operating table within a month. Second, my insurance company approved it right away. Insurance companies never approve anything without an argument. They give you responses like,

"Yes, Mr. Fishbein, your doctor does say you could die without this surgery but that doesn't mean it is medically necessary as our statistics show that death is the usual condition for people of your age."

Generally, when doctors give me medical advice, I go along with it, based on the presumption, as Jake Flores is always reminding me, that it's amazing what you can learn if you stay awake during medical school.

One reason it turns out that this operation was advisable is that I have been putting it off for years and there is a point where you damage your leg so much that the operation isn't likely to be successful. Ronda said she would have been mad at me if I didn't do it as it would mean I would not be walking eventually. I guess she is right, though at this point, it is not just the pain, it is the nausea from the medication, the not being able to do ANYTHING, the giving myself injections of blood thinner medication, and the whole just being a patient thing.

It turns out that the reasons the nurses always ask that cheery question is that one of the side effects one of the medications I am on has is constipation. I told the nurse I had solved that problem by puking up all my food.

Here is the really, odd crazy thing, though. If I could go back to my 17-year-old self the day before I first tore my knee up in practice and told her everything that would happen, I know that I would have gone ahead and done it anyway.

One of the cheery nurses chided me this week,

"If you'd believed those doctors and physical therapists way back then,you wouldn't have kept competing at judo and be needing this surgery at your age."

"On the contrary, I never doubted they were right. I just wanted to win that badly and this was a price I was willing to pay."

The nurse walked away shaking her head.

Like I said, this was probably not the post to show people to convince them to start judo.
Posted by Dr. AnnMaria at 1:22 PM

And I understand, there are some decisions in my younger life that I would do it all over again, even if I knew the consequences.

You have to live life.

You actually live the Credo by T. Roosevelt that is printed on the back of my USJA card.

Thank you for saying that. You made my day. Of course, the way my day has been, a cherry jelly bean would have been an improvement, but still, thank you, I really appreciate it.

I read somewhere that there are two types of pain in life. The pain of discipline and the pain of regret. After reading your latest blog, I don't think you suffer at all from the latter. I'm sure you'll be back at the WCTC very soon shaking a cane at the students to get things done right. Here's to hoping you recover soon. Take care.

AnnMaria, hang on there! My sis-in-law had torn her knee many years ago rock climbing with her boyfriend, married the guy (on crutches!) and had similar surgery three years ago. It felt rotten at a time, it's s-o-o-o back to normal now. Nothing a little physical therapy can't do!

As a fellow judoka who has had this procedure done to both knees and an elbow, I can definitely sympathize with your situation. Believe me, the pain is a distant second when compared to the boredom of being condemned to the couch…

But look at the bright side; plenty of time for writing thought provoking blog posts, eh?

And I have to whole-heartedly echo Ice's sentiments.

I wish that I had not followed that link!
I feel so ill!

I've a co-worker who put off surgery almost as long as you did.

He was back at work in three days, and the difference in the pain levels for him was amazing.

Would he have still played football? Without a doubt. His only regret is that he did not have the surgery sooner.

I do hope you are feeling better. I hate to think of any of my friends in pain.

Stephen -
I guarantee you this isn't the same surgery. I had six knee operations before. I was back on them at six days after one surgery and won the world trials a couple of weeks later. This is nothing like that. Three days after this, I was still in the hospital. That (and the BOREDOM) is part of what really through me. I had no idea how bad this would be nor how long it would last. And my days for the next couple of weeks are three hours of sitting up doing anything and then three hours laying down healing. Seriously, I must spend 15 hours a day laying in bed just waiting for cellular growth.

I have used up my life time quota that anyone is allowed to say, "This sucks."

I am so happy I have a job I can do laying down with a computer on my lap so I am not bored totally out of my mind.