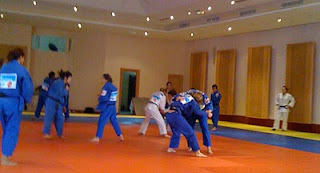 I realize we came back from Tunisia a month ago, but business has been wonderfully crazy busy. I am taking a five minute break to write this post. My advice to anyone who has a chance to go to the training camp in Tunisia next year is that you should go. It would be especially good for just about any American player. I mostly watched the women's practices. The first thing I noticed is that there were several countries you don't see that often. Tunisia, of course, Kazakhystan which I probably spelled totally wrong and Spain all had a lot of players. There were a few from Czechoslovakia, Hungary, Australia and I don't remember who all else. There were some really good players but there were also a lot of upcoming athletes so if you are coming to your first camp, this would be a good choice. There is also the fact that EVERYONE was incredibly nice.

In Tunisia most people speak Arabic and French and neither Ronda nor I speak either. It didn't matter. All the players at camp went out of their way to get matches with each other. When Ronda hurt her knee, the Spanish coach came up to me (at least I speak Spanish) and offered to have their doctor check it for her and tape it. Some how she made the Tunisian coach understand that she wanted to come to practices and do gripping, matwork and whatever she could with her knee taped up and the coach was fine with it, so she was able to attend every practice and get in tons of matwork.

Then there is the country itself. It is amazingly beautiful and not at all what I expected, given all of the negativity we hear in the news about Arabic countries and Africa and here you have both together. The food was great. The people were great. The history was amazing. 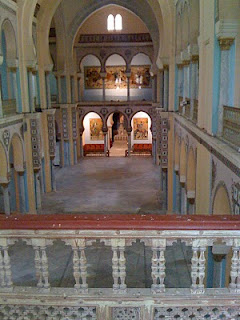 Even the cab drivers were nice. We went on a tour of the historical sites between practices and Ronda commented on how friendly everyone was. He said,

"In Tunisia, everyone is welcome. We get along with everybody. We are the Switzerland of Africa. Like Switzerland, but without the chocolate. No chocolate. It's too hot here. It would melt."
Posted by Dr. AnnMaria at 11:18 PM

That was a sweet way to describe the country.

I have to go for training camp. And I read this that is quite very helpful.