What would you measure?

I received this email today, from Dr. Will Dampier, a professor at Drexel University who also happens to be a judo instructor from Philly. He says,

I've gotten a Biomechanics of judo course approved for the summer semester (starting in June). I've got a preliminary syllabus (obviously subject to change). I'm polling experts to see if they had any interesting brainstorming ideas on things to measure or data to collect.

I expect to have ~30 students consisting of 1 nidan (myself), 2 brown-belts, a few lower kyu ranks, and the rest will be absolute beginners. I'm planning on use motion capture techniques (possibly the Microsoft Kinect) to measure things like impact velocity, height of the hips during hip throws, the "angle of kuzuchi" (how far you lean your partner forward during off-balance), etc. Obviously our sample size will be pretty small initially but we'll see how many people I can recruit. I plan on putting any data online and making my measurement programs available as open-source code.

If you have any other ideas of cool stuff to measure I'm open to them. You can also feel free to distribute this around to anyone else who'd be interested.

Well, of course, as my lovely daughter says,


If you want any extra advice, just ask Mom because she's just brimming with it. 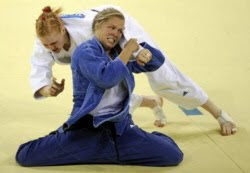 Not to disappoint, I actually did have some advice for data to collect. I suggested that when Dr. Dampier made his data available that he include data on the players attempting the technique as well as the characteristics of the technique. We often say that men and women are different in strength, center of gravity, flexibility, etc. It would be interesting to see if there are differences in the success rate of different techniques for males and females. It would also be interesting to see in what ways the movements differ between experienced and novice players. Being in excellent physical condition may make a difference. A person who is a novice judo player but a good athlete may be able to power through a throw or recover from being off-balance where someone who hasn't done anything more athletic than drive a standard transmission would fail.

So, information I would like to see on the players would be :

For each throw or other technique, it would be useful to see information on both opponents. From this information, you could see, for example, if some techniques have a higher probability of success when applied against a taller opponent, or by males, or if they only work against people who are smaller and weaker than you or with much less experience.

So, yes, Ronda was correct. I am just brimming with advice. If you'd like to add your own, you are welcome to post here or email Dr. Dampier directly at:

Will Dampier wnd22@drexel.edu
Posted by Dr. AnnMaria at 9:35 PM

Thanks for all the ideas! Since this is the first time doing this project I will likely stick to "simple" setups. I'm going to apply the measurement system to static versions throws not necessarily live rondouri. So results will be in the area of: "If I bend my knees in o-goshi to theta degrees I need to apply F newtons of pull to get the proper rotation, but if I bend my knees another 10 degrees it will take 30% less pull."
-Will

Just a quick idea - it would be interesting to compare the measurements of beginners versus those of highly successful competitors (assuming they would participate).

You might want to consider the measurement of the distance from the pulling hand to the fulcrum (the uke's feet if there is no body contact or where there is body contact). This would show the advantage of good, early kuzushi on the effectiveness of the throw.