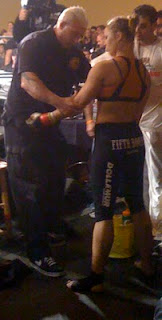 I thought I'd post here about Ronda's fight since so many people called, texted and emailed me, I figured I would tell everyone at once. It was pretty short. I had heard the woman she was going to fight, Ediane Gomes , had a 6-1 record and was supposed to be very good in jiu-jitsu, having won several fights by arm bars. Of course, I don't really know anything about MMA and that may not be true at all. For all I know, she bludgeoned her last six opponents into submission with a parakeet, although I do have to admit that the arm bar story does sound more likely.

I do know what judo looks like though, and that was pretty much what Ronda's match looked like, all 25 seconds of it. First, she threw the woman with ko uchi gari. She got on top for what looked like a tate shiho gatame and then punched her a couple of times. When the other woman put her arm up to block the punches, Ronda took the arm and switched to a juji gatame armbar.

I did not get a picture of the armbar because:
However, it looked exactly like this picture from the clinic Ronda and I taught on armbars a few weeks ago. Just imagine that the guy doing the armbar is Ronda and the other guy is a woman and they are both dressed kind of like in the picture above. And it looked just like that.

I watched Ronda's first three fights on YouTube--maybe somebody was able to record this one and they'll upload it this week. I've been telling my coworkers about Ronda since she first expressed interest in competing in MMA and I've updated them with her progress. We're hoping that the UFC decides to keep the female divisions that are part of Strikeforce, which they just purchased, so they can bring Ronda in and let her fight Cyborg and Carano

LOL! I love the last paragraph of your description of what the armbar looked like in lieu of video or photo. Congratulations Ronda and AnnMaria-sensei. Please show us what happened at WCJTC this upcoming weekend. Take care

So...pretty much like her last two bouts went? Throw to the canvas. Mix it up briefly. Jujigatame.

@carlo Julia's soccer team made the playoffs so I will be watching her this weekend. I left Ronda a voice mail about running practice Sunday but she hasn't called back yet.

About the last paragraph - yeah, it always cracks me up when people write me about my blog and say, "Well that's not properly serious about how Jigoro Kano would have done it."

Come on, this blog has featured not one but two videos of how to do sankaku on your dog, and one on the best technique to perform on a guinea pig, using an actual guinea pig, so complete seriousness is just not on the program.

@AnnMaria-sensei,
Blinky-sensei said he would check with Gary-sensei about covering Saturday and/or Sunday since Gary-sensei, Crystal and Erin will be at Grand Rapids. Please wish Julia luck for us! Also, some people will always be uptight, what's wrong with a little humor? Take care and has anybody posted the video yet?

I wonder if you have more information about this incredible judoka!