All Your Arms Are Belong To Us 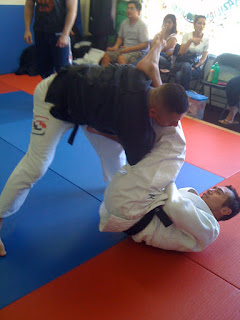 Victor Ortiz armbars Sam Garcia in one of several transition to armbar drills we did last Saturday. This is a variation of the armbar Ronda did on Sarah D'Alelio. Of course the day was full of people jumping up and yelling, 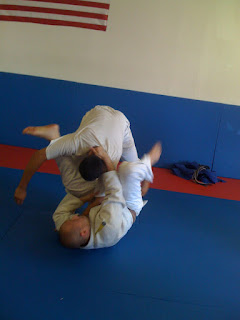 Daniel Valdez from Barstow practicing transition, a little earlier in the sequence in the same arm bar Victor is finishing above. I cannot recognize the other person just from the top of his head. Sorry. 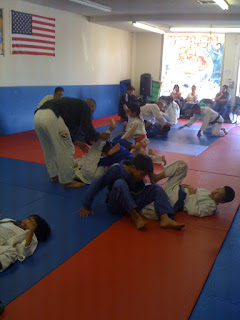 It did get a little bit crowded at times when we were all doing matwork at once. I think Nathan is resting there, right after he kicked me in the face while I was doing matwork at the other end of the mat with Crystal. How does he even manage that? It's a gift. So, I had to give a talk on statistics for two classes of middle school students today and I looked liked I'd been in a fight in a bar the night before. Of course, they were very well-behaved. 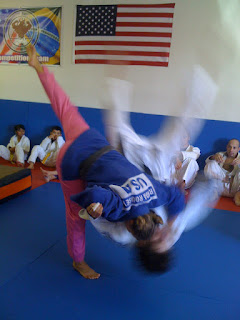 Toward the end, because we had some younger children in attendance, we thought they might like to work on some throws. Ronda demonstrated a head fake to a switch (tani otoshi). Some of the younger kids wanted to know why she started doing the switch, which led to a story about how, when she was a kid, she threw everyone with uchimata and we were trying to get her to do a different throw. Since Steven Schwarz from Valley Judo Institute was there and we hadn't seen him for a long time, of course that led to she had to throw him with it for old time's sake. I'm sure he just didn't want to admit how much he missed her throwing him at those Nanka workouts.
Posted by Dr. AnnMaria at 8:54 PM

Email ThisBlogThis!Share to TwitterShare to FacebookShare to Pinterest
Labels: armbars

I cannot believe the title of this post. I've been working on a couple PhotoShops for Ronda and that is the name I've given one.
I think there's a saying out there about "Great minds." ...or was it "Rattled minds?" I can't remember.

Looks like the clinic was a blast.
Thanks so much for the blog, your thoughts and your service to judofolk.
In taking a morning to do this clinic, I suspect there was an opportunity cost for you and for Ronda.

I believe that unknown guy with Danny Valdez was Adam Coronel. In the not- so-far-future those 20 or so of us who were there will shake our head in amazement that a clinic with Ronda Rousey was only $10 for judo players and $20 for non-judo players. How can you afford NOT to have been there? Thanks again for holding this clinic. Will there be another one after her next MMA match?

We were working on similar standing Armbars as well in class yesterday.

As for the title, I say that all the time in class. It's interesting how people can think the same. I'm big on chokes as well so you will also hear the occasional "All Your Necks Are Belong To Me" from me at work.

It was a lot of fun. We'll probably do another one again in a month or two. It depends on Ronda's fight schedule which I don't think is completely determined yet.

I desperately looked for flights to bring my son out for that very reason. Even my wife agreed that a clinic hosted by you and Ronda would be time and money well spent on him, and fun for Dad and son! So I do hope you do another before my work takes me out of the country. If there is open training on Saturdays, we may take the trip out anyway in early October. It would be a thrill for us to meet everyone there. I'll want to run that by you ahead of time, though.