She calls it MMA now 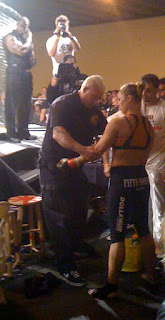 Earlier this week, a judo coach I had not spoken to in a couple of years caught up with me on Twitter and said,


"I just heard that Ronda is a professional fighter in MMA. So, is she not doing judo at all any more?"


"She's still doing judo. She just calls it mixed martial arts now and gets paid for it."


Now is the time in every fight when I call up Jim and say how worried I am that my little baby is going to get in a ring with people who are going to try to punch and kick her. Jim always says the same thing, that she'll be fine, that once they clench up, Ronda will throw the woman and arm bar her because it is what Ronda has been doing since she learned arm bars in the eighth grade. I pointed out that is what the other person would expect and that in the pre-fight interviews her opponent said they had been training for that. His answer,


Yeah, well what did you expect her to say to reporters? 'I think I'm going to get killed?'

Even though I think I will never get over worrying about all of my kids, I have to admit that Jim does have a point. Ronda won the high school nationals by arm bar when she was a freshman, before she was even old enough to be allowed to do them in the USJF Junior Nationals. She won the women's division of the California state championships with an arm bar the same year. When she was 16, she was winning matches in the Ontario Open with arm bars, beating the then-Panamerican champion.  At 17, she was winning matches in the Junior World Championships with an armbar, on her way to taking home a gold medal. She was the first American woman in a decade to win a World Cup, including a win with an armbar that made it into 101 Ippons. 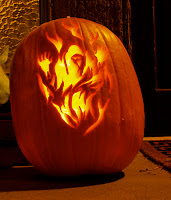 So, yeah, however much practice that other woman has in avoiding arm bars, I'd be willing to bet that Ronda has a lot more experience getting them on people who don't want to be gotten, and who have practiced their defense a lot, specifically defense against her. Just like in the 2004 Olympic Trials, my money is on the little pumpkin.

Is that pic from tonight's fight? Is it too late to watch her live online somewhere?

oooh I like that.
"The Little Pumpkin" is the best nom de cage ever!

Don't know when people are going to get it. Field mice can't train for a hawk.

With apologies to Chief Brody, the best future opponents' corners can do is realize "we're gonna need a bigger icepack."

The original "Little Pumpkin" was Miguel Tudela, a member of the 1980 Olympic team for judo (which ended up boycotting the Olympics) and national champion in both judo and sambo in the 189 and later open weight divisions. Miguel could lift more weight than any human being I had ever seen. His wife called him "Little Pumpkin" and NOBODY was going to comment on it out of fear that Miguel would kill them and eat them.