Animal Judo Theme: I. The Shrimp

I didn't do this on purpose but I just happened to notice that all of the exercises I did for warm-ups had an animal theme. So, for the next few posts, I'd like to go through the "animal exercises".

First there is the shrimp. At some judo clubs they call this exercise 'ebi', which is just Japanese for shrimp. You probably know the shrimp crawl. You lay on your side with your knees bent push off with your feet and have both hands in front of you with your elbows bent.

You "shrimp" first to one side and then to the other, usually all the way down the mat. Do you know WHY you do that?

Well, I don't know why YOU do it but why I do it is because that is the exact move you use when trying to stop someone from pinning you when they are coming at you from the side.

In the picture above, you see Manny Gamburyan coming in for a pin and his opponent is doing that same shrimp move. 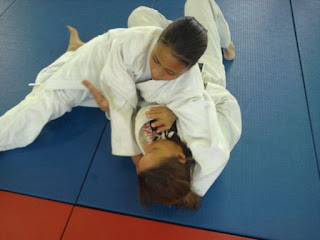 In the second picture, again, you see someone trying to pin me in judo with kesa gatame and I am doing the exact same shrimp move where I have my hands between the two of us to make some space so I can turn out before she pins me, my feet are on the floor, knees bent, turned on my side and I'm going to do that shrimp move to get out.

Someone sent me this today and I thought of my kids and, of course, your daughter.

It is our light, not our darkness, that most frightens us.
We ask ourselves, Who am I to be brilliant,gorgeous, handsome, talented and fabulous?

Actually, who are you not to be?
You are a child of God.

Your playing small does not serve the world.
There is nothing enlightened about shrinking so that other people won't feel insecure around you.
We are all meant to shine, as children do.

We were born to make manifest the glory of God within us.
It is not just in some; it is in everyone.

And, as we let our own light shine, we consciously give other people permission to do the same.
As we are liberated from our fear,
our presence automatically liberates others.

an except from A Return To Love, a book by Marianne Williamson