How the Media Works - & Why I No Longer Dislike Dana White

There is a documentary coming out on Monday centered around Ronda, a.k.a. darling daughter number three. I joke about how the main point of the show better be that her mother was awesome or it's going to be pretty awkward around here next time she comes over.

Shortly after I won the world championships, I was interviewed for an hour for a radio show.  I talked about all of the places I'd traveled, friends I'd met, opportunities I had. At the end, I said that I was looking forward to everything I had put off - I'd never had time to plant a garden, go camping, take my daughter to the park or a hundred other things "normal" people get to do.

Guess what? The only part that aired was me saying all of the things that I never got to do. My brother said he was really confused because it certainly sounded like my voice but it wasn't like me to feel sorry for myself.

Seriously, though, here is how the media works  ---
People come around and film for days on end. They ask hundreds of questions to dozens of different people. They get 30 hours on film. Then, they take 3% of that and make a good story.

I'm not saying people in the media lie or distort things or that they are bad people. A couple of the people I have met seem to be jerks but the rest are pretty nice men and women just trying to do a good job. Their job is to entertain the audience. That's why you never see any clips of me sitting in my office writing the game - coding javascript just isn't that entertaining to watch, however much it might give a fuller picture of what my life is like than just showing me teaching judo.


I'm not complaining. The same is true of anyone, whether it is the president of the United States or a world champion in mixed martial arts. How many times have you seen Ronda on TV saying

"I don't have any problem with Sara Kaufman. She seems like a nice person and she was a former world champion, so she's a legitimate opponent."


Ronda has said it plenty of times, but it isn't all that entertaining.

I used to get irritated at people who made comments about Ronda. There are two things that they don't understand.

So, cut people a little slack when you see them on TV or see some quote in an article. 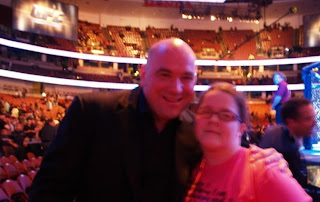 Which gets back to me being a hypocrite. I used to dislike Dana White because of the stuff I would see that he had said - and then I realized I was doing exactly what I hate when people do it to Ronda - judging someone based on a few sound bites.  Every time I've met him, he's been perfectly nice and polite to me and to everyone else in my family. Based on a total of probably 10 minutes, I don't think I'm qualified to say he's a nice guy. No more am I qualified to say he's a jerk based on a few things I read or saw on TV.

People are multi-faceted. Don't judge them based on the one side you've seen portrayed in the media or the few minutes you've seen them in person. No, not even if you see them running over a puppy with their car on purpose - maybe just off camera there is a baby about to be attacked and the puppy had rabies. 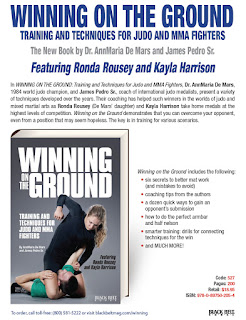 Speaking of awesome books (even though we weren't) I wrote one. It's called Winning on the Ground. You should buy it.

In the editing room, you have to cut 20 hours of footage down to a 20 seconds clip and the 20 second clip has to contribute to a larger story the editor has decided to tell and create controversy.

Reality or truth are secondary considerations next to the major issues of "will this get ratings?" and "Will this please/upset our advertisers/owners?"

Given enough footage, an editor worth his salt can spoon feed the viewer pretty much any conclusion he wants.

I remember a piece a couple decades ago about a rural community in France. Large fields separated by barb wire, to prevent cows from wandering in other people's fields. Pretty typical, a charming area, really. A camera crew shot a few local kids playing around. Then they called up a kid over. The kid came and put stuck his face between the wires. Click. Front and center, a dirty, tired kid sticking his face between barbwire trying to look on the other side. Done and dusted. A bit of dramatic color adjustment and there. Front cover of a national magazine with an incendiary piece on child abuse.

TV news are entertainment with a serious helping of PR and marketing. As scripted as anything that comes out of Hollywood.

It takes a big person to admit when they are wrong.

Still, I'd rather meet you than Dana White.

Aw, thank you RECCE, what a nice thing to say.

Can I have your permission to marry Ronda? I'd really like to get to know her better and that seems like the most reliable method. =P

She's too young to get married.