There was a contest to raise money for the World Food Programme before Ronda's last fight, just like every time.

Ronda said that she thought the people who donated over 1,000,000 grains of rice should get something special. So… some of them requested an autographed poster and they received it.

In the past, sometimes people received prizes that their reaction was like when your grandmother gave you pajamas as a present when you were a little kid. That is, they were polite but there was the sense that it wasn't what they hoped for.

This is where we dropped the ball …. others didn't request anything in particular and I went off to Sioux City, Iowa, then to Grand Forks, Fort Totten, Belcourt and back to Fort Totten in North Dakota. Ronda left the country on vacation and Marina had a fight and ….

I said to Marisol,

"What did we send the rest of those free rice winners?"

"You guys never gave me anything."


and I did a lot of creative swearing.  So …. we have things for you that will have to get mailed after I get back (I am leaving AGAIN in the morning for San Francisco for a few days for work).

If you were one of the free rice people who did not get a prize, I will be putting things up on this page and holler when you see something you want. Here are the first two and Ronda will be bringing more stuff by when I get home. … This is a size small Strikeforce World Champion shirt.  Yes, she will sign it, if you'd like. 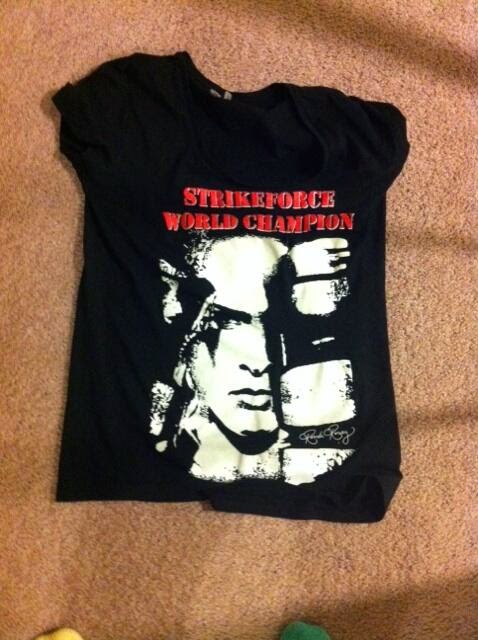 This next shirt was a mock-up of an idea my friend, Al Bane, had but it never got made because, among other things, the company did not have the right to use the UFC belt, logo etc and I suggested the UFC wouldn't appreciate that. You can't actually wear this because I think it was painted - it was just made for a meeting to show the idea. There isn't another one. Yes, she will sign it, if you'd like. 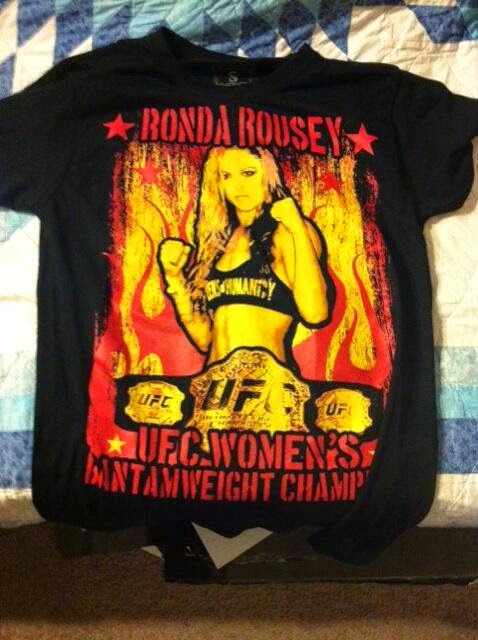 This is like those game shows where you can pick what is behind door number 2 or wait and see if what comes up next will be better.

If you were one of the people who donated over 1,000,000 and did not get a prize (including Laura!), let me know if you would like one of those two things.

Or you can wait and see what she brings over in the next week or so. I have no idea, so your guess is as good as mine.
Posted by Dr. AnnMaria at 10:25 PM

This is out of topic. Almost everyday I check the internet on anything about Ronda and of course that includes you. Needless to say I'm a big fan of you both. A few hours ago Joe Rogan was quoted at SN that Ronda beats Mayweather in an MMA FIGHT. There are an endless conflicting comments on these debate. I myself believe Ronda can easily take him down and armbar him. I'd like to hear your serious opinion on this matter. Thanks and more power to you.

It's kind of a silly argument, really, along the lines of "Could a ninja choke a tiger?"

My serious opinion is - anything is possible. I fought a lot of guys who were every big and much better than me in many ways, but I only needed to get them in an arm bar ONCE to break an arm.

The big question is this: Is Ronda strong enough to clinch with Mayweather long enough to execute one of her throws?
Because we all know what happens if Floyd hits the ground.

Here is a good question Dr. D...
How is it possible for Ronda to get mentally prepared for someone like Gina Carano.
The odds on that fight will probably open at 20/1. And...from what I have read...it would be like Ronda fighting her best friend, Marina. Ronda respects her and genuinely likes her to that extent.