We had a baby shower at my house today for Maria and baby-to-be Ortiz. All of the sisters came, as well as the two cousins who live in southern California, a couple of the neighbors who knew Maria growing up and a few friends my daughters have known for a decade or more.

There was Marina, who Ronda met at some junior training camp when they were 14 or so. Stacy was there, a friend Maria met at St. Monica’s High School back in 1997. Deborah and Kiah came. They moved in when Kiah (Deborah’s daughter) and Julia were both under six months old.

It was typical baby shower games, courtesy of Jennifer who was assigned to come up with them. We played “Pin the egg on the sperm”. However, since we had small children present also we told them that it was pin the balloon on the balloon receptacle. Jennifer even wrote “Balloon receptacle” on  the large circle on the wall to insure that the two- and three-year-old children present would be appropriately fooled. Each sperm had a name written on it and, theoretically, the baby would be named whatever was on that sperm.

Maria told us she didn’t care that Samantha won, no way was she naming her baby John Calvin Hobbes Ortiz. 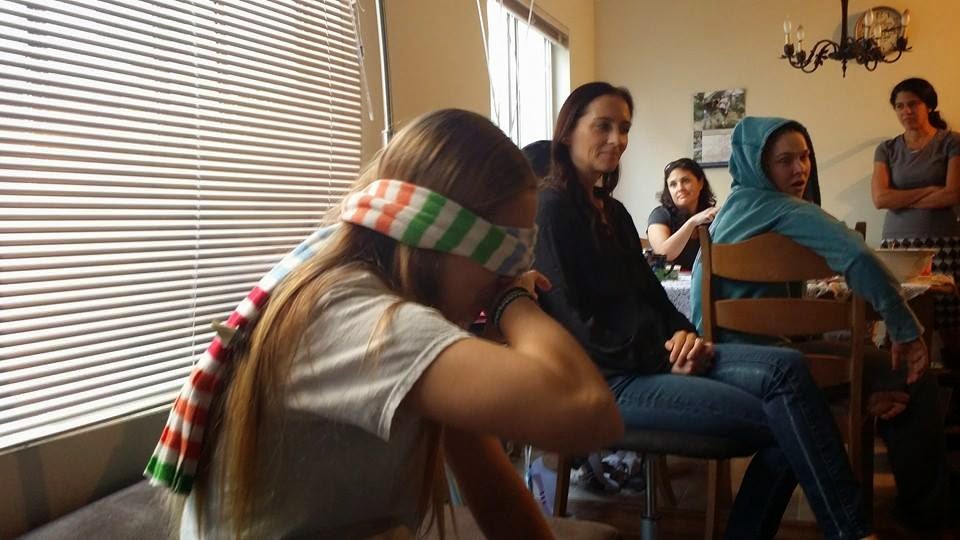 Ronda, who hates to lose at anything, protested that the other people should be disqualified on the grounds of suckitude.

We played the game where you are blind-folded, someone feeds you baby food and you have to guess what it is supposed to be. The first guinea pig was Julia and her first comment was,

I don’t know what that is but, Maria, you shouldn’t feed it to your baby.


Adrianna and Marina tied in that game. 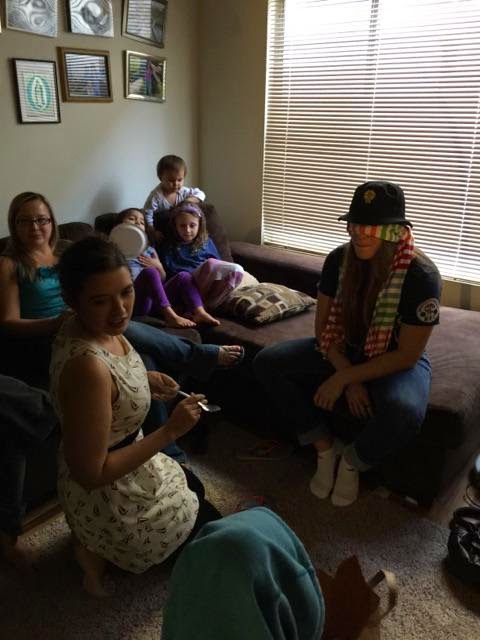 Eva was put out because Emilia got on Aunt Ronda’s lap first to make the ugly Christmas sweater cookies. I think Aunt Julia stepped in to be Eva’s assistant though, so she was happy with that.

After a while, Kiah and Julia, being sixteen, decided we were all boring and went next door to Kiah’s house.

So, that was the baby shower - silly games, small children, small talk, cookies. I had beer and wine available but no one wanted anything but juice, coffee, tea and milk. We had all of that, too.

People who actually meet her (as opposed to see some edited for TV version) always exclaim about how nice of a person Ronda is. Part of it, I think, is that we have a boringly normal family. When we have a party there are no strippers, drugs or domestic violence calls to the police.

We don’t really see the public version of Ronda very often. When she’s in front of the cameras she’s done the whole hair, make up, designer clothes thing or working out, punching a heavy bag. When we see her, she’s usually exhausted from all of that and lying on the couch in sweats.

My concern for Ronda has always been that she would turn out like so many professional athletes and entertainers who seem to self-destruct. I think it is really healthy for her to be around people who don’t want anything from her and to not be the center of attention.

Balance in life is good for you. Also really important is realizing that major parts of your life will stay the same no matter what. I hope Ronda wins every fight for the rest of her life, and I expect she will. I hope her movies coming out in 2015 are extremely successful.  I know nothing about movies and have no idea if they will be or not. What I do know is that regardless of all of that, Eva, Emilia and the new baby will fight over who gets to sit on her lap and she and Maria will have discussions on such philosophical matters as which family member could most easily become a serial killer and murder us all in our sleep. (Jennifer, in case you are wondering.) 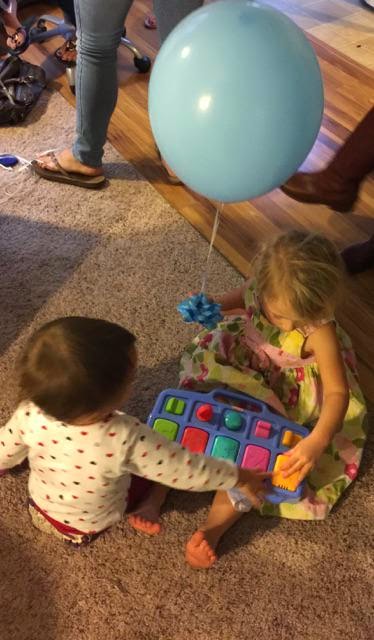 The two youngest guests, seconds before they started fighting with each other.

Speaking of balance...I get equally excited watching the Cassini-Huygens lander squeeze through a 100% methane haze and touch down on Titan (Saturns moon) as I do when watching Ronda or any of the other young women battle in the Octagon. When I say excited I mean jumping up and down excited!! I guess this makes me more weird than most.
Interestingly anecdotal as always, Mrs.DeMars

Great blog, keep writing these I love them.���� @MMAFanRandy

Love the blog, keep these going I love them! 😄👍 @MMAFanRandy

I know it was just a figure of speech, but having a dysfunctional family is not "fun." There was no alcohol, drugs or fighting with the cops being called in my family, either. But there wasn't any need for any. They were still really abusive and they relished it. In a way, that made it worse because it meant that they were rotten human beings to the core. They weren't under the influence, just evil. Don't be so quick to write off your family as "boring." There is no correlation between unhealthy and insane social interaction and being "fun." No one has fun in situations like that. It seems rather that your family is ideal. Everyone tolerates everyone else and dismissed rude behavior or speech. It's a lot better than people who dig for insults in every little statement in order to keep you in the position of having to defend yourself so that you can be controlled by forcing to modify your behavior and speech to the very narrow set list of "acceptable" things and eventually change into their obedient puppy.

I like reading all your blogs lol. I also find it pretty cool how this blog talks about Ronda being away from the center of attention, and just being treated like any other family member would. I find your blogs beneficial and entertaining because it has given me different perspectives on having character, and other simple things as I continue to grow up. Your quotes are also very inspiring too. Thank You.
I also can't wait for Ronda's next fight, it's in the same month as my birthday. She is going to do great!

My family is boring in that we don't do things that make the news. Honestly, when I was younger I thought families didn't exist that didn't fight, where no one was on drugs or mentally ill or abusive. I thought that was just a made up thing for television, like talking horses. Believe me, every time we get together, I realize how truly blessed I am to have the family I do.

That was a rather funny description of some really funny sounding social games played at some strange, weird "baby related" events in a far away, weird, alien country.

I certainly didnt expect that as my first read of mrs DeMars blog :P

But not expecting "that" is pretty much the usual when i comes to me discovering anything about miss Rousey and mrs DeMars. (all of this is totally new for me since i became fully aware of all this only a few weeks ago... but thats a long and pretty awesome story)

Truth be told i wish such games were played more where im from too. It would be fun watching the faces and reactions. And seeing some fake prudishness disappear, hopefully.
Ideas for future games maybe? :)

As for miss Ronda, i would say that i would totally expect her to be a completely normal person and a normal kind of a girl, if i ever met her.
And more importantly: a good person. (that means someone who is trying to do good, to become better)
The only way i would be surprised would be if she is not, somehow.

Im not buying any of the "villain of UFC", "trashtalking" or "heel" PR thats been so freely dished around her.

But i do worry that she will feed that part of PR and Marketing too much and then turn into a character like that unintentionally.
One can sometimes play up to such stuff out of spite (a tradition where i come from) or anger, but that usually comes back to bite that same person in the back. No, its not fair at all, but that only makes it worse.

One of the best similar examples i can offer is the case of Beastie Boys, who talked about how they unwittingly turned themselves into caricatures they were trying to be sarcastic about and ridicule in their first hit song "You gotta Fight..." It took them years to divest themselves from that unintentionally created public image. They said the hardest part of it was to even admit that they turned out into the very kind of people they wanted to ridicule with that song and the video.

I think miss Ronda has too many good things going on, and she is a very positive influence on so many people, including myself - to ruin all of that by playing to the negative fiddle of the media, even if its done out of spite. (feels like that to me, btw)

I loved hearing that she doesnt feel like she needs to satisfy such media driven arguments and "trashtalking" with any other opponent now, after she handled Tate twice - in an interview from early in this year. I wasnt surprised at all that there wasnt any of it in other fights. And she was awesome about the next fight with Cat Zingano at the "Time is now" conference too.

Which will be the first ever pay per view fight i will watch in my life. Despite the fact i can easily watch it in other ways.

I really hope she continues like that and finds a balance between who she is and wants to do and the media-PR parasitism. Its certainly not in trying to be too good and pristine, or trying to play the villain because a part of audience wants it.

For now, i would like to make a point that not every pay per view ticket miss Ronda brings in to UFC is coming from fans who feed on negativity.

Some do it (and donate to her charity campaigns too) because they see a great person who became a true MMA champion the likes of which could be seen only in the best days of Pride.