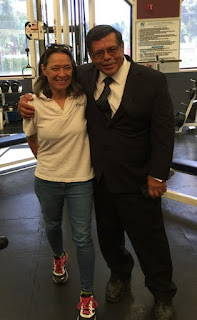 Risk vs reward mentality, or as I see it as someone who doesn't know a great deal about judo - lack of confidence in ones ability vs competitors. If both parties were lacking in XYZ areas, it stands to reason at least one of them could have 'exploited' it some what, I guess its a case of picking up on the weakness rapidly and using it to your advantage?

That's one of the main issues with being what we are, lacking self confidence in such situations would be pivotal to ones success and ability.

It's just as mentally retarded as if Holly walked in thinking she'd out grapple Rhonda.

I'm sure you feel vindicated. That performance just proved your point.

Advise you to tell your daughter the antithetical: It's a losing strategy to be weak where others are strong. Good lord, fire Edmond.

Purchased the math and history games for my daughter. I am excited about learning/playing too. Thank you for making a cool product.

The Queen Is Not Dead.

However, I most humbly and respectfully offer an article that analyzes some of Ronda's striking strategies as well as mentions that Edmonds many false statements (lies) did her no favors. And how is he now in bankruptcy?

"What she (Ronda) really needs is to get away from her current gym and trainers and to move into a truly elite camp where she can be surrounded by fighters who will do what Holm did to her day-to-day," from the article.

I can an barley imagine what it must be like to fight and win in elite combat sports since the age of 11 except that retiring before 31 would be on my mind; think a big world with lots of adventures would await me.

There are strong reasons Ronda made Forbes list of Top
Influencers

Ronda has helped many people in many ways. She has made history and the world will remember her name.

I feel the need to say this as a real fan of Ronda...Ronda has been an inspiration to me from the time I watched her in the ultimate fighter (some things about her reminds me when I was younger and aspired to be a professional athlete). It's funny how my family see me on my laptop or phone and say " Let me guess...Ronda Rousey" My 3 yr old pronounces her name something like, "wonda wowshie." My husband texts me from work and sometimes asks me "so what's going on with Ronda?" Lol So yeah, one day it clicked, that I indeed became a fan of hers.
In the beginning of the Ronda vs Holly fight promotion, I had a dream that Ronda was in a bright white room on top of a latter and she fell from it. I immediately woke up with a bad gut feeling and tried to ignore the doubt that suddenly creeped into my head which was "something might happen that's going to make her fall." Anyways, I continued to root for her as a fan will normally do but the day came where Ronda did fall and it all felt surreal! I quickly remembered what you said about Edmond in an interview, and you spoke the absolute truth!!
With all that said, I believe in Ronda and would love to see her come back and avenge her loss. I'm obviously not in her shoes and neither in her head, so I don't know if she wants to continue fighting but I sure feel that she can come out of this bigger and better than before as person and athlete. What an amazing athlete she is! It is why I respect her so much...A new camp and focus from her part will do wonders and lift her spirits. My family and I love her very much but I love her more hehehe! Thank you AnnMaria for bringing up such an amazing woman into this world...best wishes to you and your family :)