I Need to Take My Own Advice, Or Stupid Things I Do and Maybe You Do, Too

Like Alice in Wonderland, I often give myself good advice but very seldom follow it. I've decided to get back to blogging and make this into a series: advice of my own I should take. Who says you can only make resolutions on New Year's? No one asked me about those rules.

I've decided to make July resolutions that will lead to me being happier, and you, too, if you follow along.


Don't give it more attention than it deserves.

I stole this line from Gary Butts and it's very good advice. Do you ever catch yourself worrying about something over and over? There was a misspelled word on my slide in that presentation. That person corrected me in a meeting and,  in fact, their correction was wrong, how disrespectful!

I left my keys in the office and had to go back for them. Is that an early sign of Alzheimer's?  I am getting old, after all.

The fact is that even things that seem SUPER-IMPORTANT at the time really aren't that big of a deal in the overall scheme of things. I like Facebook for seeing what kids I knew when they were in judo are doing now. That kid who was just devastated not to win the junior nationals at age11 and beat herself/ himself up about it is now a speech pathologist, married, with two kids and just bought a house. Really, was it that important that you got caught by a foot sweep?

I know I am a big hypocrite because I was always upset when I lost. Even today, if a sale to a school district doesn't go through or we don't get a grant funded or an investor decides to take a pass on us, I feel like a big failure. It's silly, I know, but I'm working on it.

At the end of the day - there's another day, because that's how time works.

I've always been kind of like this my whole life, blowing things out of proportion. I think it comes from wanting to do everything perfectly, which sounds good on the surface but no one is perfect and trying to be is the key to always feeling like a failure.

When I look at people I know who are usually happy, they all have this in common
... they don't get upset by things that aren't all that important. For example, I went to pay the notary -everything in Chile requires a notary and you have to pay in cash ( - if you are interested in my life in Chile, check out the Start-up Diaries over on the 7 Generation Games site) and she said my 20,000 peso bill was fake. I tried to give her another and she said that was fake, too. If you don't have the Chilean peso exchange rate memorized it's about 20,000 pesos = $67.  I was pretty pissed off.  I had gotten that money from the ATM at the bank and you'd think that wouldn't give you fake money.

I thought of some of the happiest people I know, and channeled my inner Alice, asking:

"Is $68 really going to cause you to go bankrupt? Is it worth ruining your day over?"


I went to Santa Lucia Park, ate fresh strawberries I bought from a fruit stand on the street and wrote this blog sitting next to this giant piece of pre-Columbian art 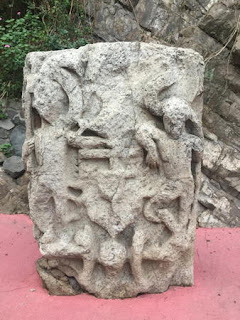 Here are my next four or five posts in this series, coming up  (I say four  or five because I'll probably end up putting a couple together....
Like this blog? Help a sister out by playing AzTech: The Story Begins . It's free!
You can play it on your iPad or on the web on your computer.

Email annmaria.demars@7generationgames.com  and let me know what you think.
Posted by Dr. AnnMaria at 3:06 PM