And Then Again, Maybe I Won't 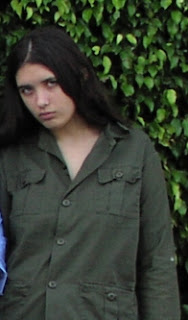 Most of my life, I have worked two or three jobs, or worked full-time, attended college full-time and competed on the U.S. judo team. Today, I decided - STOP!

When I added up the hours I would need to work over the next few months to write the next two grants, the interim report on one project, the final report on another project, teach a graduate statistics course, give two national conference presentations on opposite coasts, complete two evaluations for clients and write two e-learning courses, it came to over 90 hours a week. Not that there is anything new about that, because I have been working 90-hour weeks for the last couple of decades.

Instead, I decided to take a sabbatical. Starting in January, I am going to work half-time, as in 20-25 hours a week.

My daughter, Jenn, shown at left in a bad mood because we made her wake up before 9 a.m. one morning, said to me,

"Ha! I don't believe it. I think you will work a normal number of hours maybe, instead of an insane number of hours. I can't imagine you working less than 40 hours a week."

There is some cause for Jenn's skepticism, given that my record of number of hours without working in the last twenty years stands at 72 hours. This was three days when Maria and I took a cruise to the Bahamas, and the second we were in the Miamia airport I was checking email on my Treo and writing responses to clients to be emailed when I hit some civilized place. Can you believe the Miami Airport did not have wireless???

So, my plan is to ease into it and not work after 7 p.m. any longer and to take Saturdays off. Everyone who knows me is betting I can't do it. I did knock off work at 7:20 today, but then I had something to finish so I started working again at 9. So far, I am up to zero. Not a good start.
Posted by Dr. AnnMaria at 6:49 PM

i feel bad for julia and dennis cause the less you work the more you get annoyed with how little work the people around you are doing.
i bet for every ten hours a week less you work are five garbage bags full of stuff you'll fill with things that you say we don't need and will throw out/give away.

You should be HAPPY, then, because by the time the Olympics is over we will have room for you again and the Ronda clothes volcano

When I was a teen,my room was always mesy,it had a signature clothes volcano too...hahahaha.So,my mother used to bribe me with money.She did this every 1st of the month."I hid $20 somewhere in your jungle(my room)clean it,and you'll find it"she used to tell me for motivation.However,it never worked out.I'm still very messy lol.